Trending
You are at:Home»THEATRE»THEATRE: THE LAST CONFESSION
By Karen Salkin on June 12, 2014 · THEATRE

Since this play is about the possibly suspicious circumstances surrounding the sudden death of Pope John Paul I in 1978, just a month or so after holding that revered position, my little Jewish mind couldn’t comprehend all of it. I was wishing that the Catholic Mr. X had been there with me, to let me know just what was what. (At intermission, a woman explained that the better the wardrobe on the men, the higher-up in the church hierarchy they were! That helped me somewhat.) 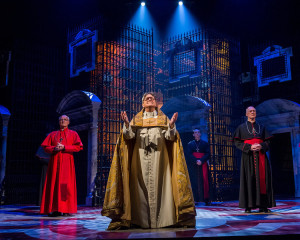 I don’t really remember much about this traumatic real life event, so I didn’t even realize that the premise was a true one until intermission. And then I felt terrible because Pope John Paul I seemed so lovely and caring in this play. (Not to mention that he looked like Nathan Lane from where I was sitting, and who could ever root against him?!)

All that being said, the very first thing I felt when the play began was comfort; there was just something comforting about a real play with actors who sound as they should, especially when weirdness has become the norm in the theater today. It was great that I understood just about every word from each actor, except for one, but he didn’t talk that much anyway, so it was okay. And I loved the international cast. [Sidebar note on my thoughts on the cast: there were nineteen men and just one woman! So, me being me, I worried about her feelings, having to go to work every day with no other females around to talk to. And then I realized it was like me in my club days! It was always just me and the guys. When another girl finally joined the fold, I actually felt relieved.] (Great theatre review so far, don’t you think?)

The Last Confession sort-of humanized the position of Pope, and all the attendant goings-on, which I appreciated. I’ve always thought of the Pope as an institution rather than as a human being. So this play made me think, which I really enjoy. (But, if like me, you’re a tad lacking in knowledge on this subject, I suggest studying-up on the topic a bit before you see the play. It will really help. It will really help. Or, at the very least, please read the essay in the program titled Vatican Politics, written by the playwright, Roger Crane. It really does explain it all in an easy to understand way. Unfortunately for me, I didn’t do so until after the show.)

Even with all the proper acting and true story aspect, the first act was a tad too long and wordy. There was a much perkier opening to Act Two, which renewed my interest.

But, from all I had read about this play beforehand, labeling it a “thriller” and a “gripping mystery,” I think I was expecting to see Murder at the Vicarage! So, I couldn’t help but be a little confused. I’m advising you all to go in with no expectations, and just enjoy what you’re seeing, especially the excellent performances, led by the diction-perfect David Suchet. (“Hercule Poirot,” to many of you.) 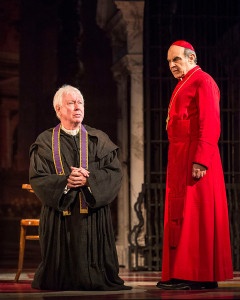 This run of The Last Confession at the Ahmanson Theatre is part of a world tour, so you should get in on it while you can. It always does hurt my mind to see a play or movie that’s based on a true event, yet is just a supposition of what might have happened around those circumstances, so this play did boggle my mind a bit. But I’m still glad to have been a member of the appreciative and intelligent opening night audience. I know this is one that will occupy my mind for a while to come, and that’s a good feeling.

Here’s a total digression, but I love this story and it kind of goes along with this theme, so I figured I’d share it with you here: When my friend, Ronnie Hazel, Jr. from Providence, Rhode Island, was about ten, and was in Catholic school, and I was staying with him for a week, he had a homework assignment on epistles one night. Again, being Jewish, I had no idea what an epistle was. He said we had to choose one and write about it, so being anxious to get to playing a game with him, I suggested we choose the shortest one and go from there. (Good grown-up influence, eh? And I used to be a teacher!)

At the end of the night, when I was talking to Mr. X on the phone, Ronnie said he wanted to read his homework to my beau. I told him that Mr. X didn’t want to hear it, but Ronnie insisted, so we let him. This is what he wrote for his homework on an epistle: “I couldn’t write about the epistles because a Jewish person was helping me.” Mr. X and I were hysterical, but we told Ronnie that he couldn’t hand it in like that.

The next day I showed-up at his school to pick him up, and his teacher from the previous year just casually said, “Hi, Karen.” I asked her why she wasn’t surprised to see me, since I was rarely in Rhode Island, and she said it was because she had seen his homework! His current teacher had passed it around the faculty room because she thought it was so funny. And the second grade teacher explained to them, “Oh, that means his friend Karen is in town.” I guess this Catholic school took notice when little old Jewish me showed up there!

So, back to The Last Confession. I may still not know what an epistle is, but because of this play, I at least have a better understanding of the Vatican. So, if you have a child who needs me to help him with his Catholic school homework, I think I’ll finally be up to the task. At least I pray to God that I am!