Trending
You are at:Home»THEATRE»THEATRE: THE KING AND I
By Karen Salkin on December 20, 2016 · THEATRE

THE KING AND I

In this day and age of so many new-fangled musicals, it was such a pleasure to see this classic at the Pantages Theatre in Hollywood last week.  The opening night audience joined me in my appreciation of The King and I.  I brought a friend who had never seen it before, and she was as enthralled by it all as I, a life-long fan, was. 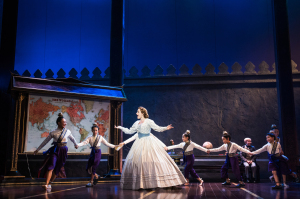 Laura Michelle Kelly and children. Photo by Matthew Murphy, as is the big one at the top of the page.

I have not been able to stop singing the songs since then. (No worries, cast members–your jobs are all safe.) I’m proud to say that I know every word to every song in this show! (But, with the magnificent voices that they’re mainly written for, they would absolutely not work for a sing-along. Think about it. These are far from “ditties,” ala The Rocky Horror Show or even The Sound of Music!)

The lyrics are so memorable that I guess they just stay in one’s soul. The same goes for the score, because I can’t even walk around the house without hearing The March of Siamese Children in my head! The Rodgers and Hammerstein music has stood the test of time beautifully. 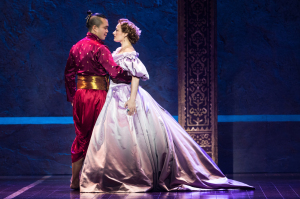 Actually, the entire script has! So much so, in fact, that it was sort-of jarring to hear the several weird reminders of the sad state this country is in right now, in the form of words that were written over half a century ago! There are lines about Abraham Lincoln, and others about building a wall around a country! How prescient of Oscar Hammerstein II, the man who wrote the book of the musical. Even the themes of slavery and the fitness of someone to rule are relevant now, very sadly. (Those are the few parts of the show I was not happy with last week; I hated being yanked back to our dreadful national reality for even those few moments.)

But that tiny peccadillo aside, this show is a supreme winner! The King and I has been one of my favorite musicals since I was a little girl, so I’ve been delighted to see this show get revival after revival.  The one playing now at the Pantages is the First National Tour of the recent award-winning Broadway revival at Lincoln Center, and we Angelenos are so lucky to have it in our own backyard. 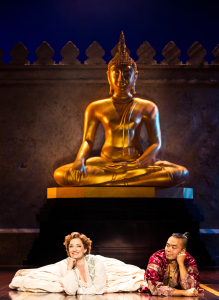 Although it is a “throwback” musical, director Bartlett Sher has imbued this production with several modern touches. For example, I’m just about positive that Yul Brynner never made faces indicating things like “duh!” But they are just right on Jose Llana, who is playing the King here. He really adds an extra little modern zest to the role. Several years ago, I gave Jose a glowing review on my former television show, when he starred in Flower Drum Song at the Mark Taper Forum. I absolutely fell in love with his singing voice back then. So, even though he performs all his numbers in this show with aplomb and gusto, I’m a tad sad that none of them were designed to show off the King’s voice, since all his songs are more talk-singing ones. (But please try to listen to his music elsewhere. You’ll be glad you did.)

So, I’m pleased that the singers in all the other roles get to show off their vocal chops, none moreso than Joan Almadilla as Lady Thiang. Something Wonderful is the showstopper for me. 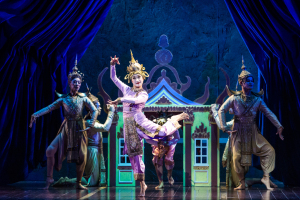 But my favorite part, perhaps of any Broadway musical ever, is the telling of a version of Uncle Tom’s Cabin. The Small House of Uncle Thomas is considered a ballet, and narrated by the beautiful-voiced and gorgeous Manna Nichols, playing Tuptim. I sat on the edge of my seat during the entire fabulously-long performance of it. I’m thrilled that this rendition, choreographed by Christopher Gattelli, is just perfect!

Laura Michelle Kelly makes a wonderful Anna. Her speech is impeccable, (the British accent is real!,) her singing is superb, and she gives the role exactly everything it needs. During an especially comical scene near the end of Act I, my friend mentioned that, aided by her redheaded wig, Laura reminded her of Lucy. Good call. 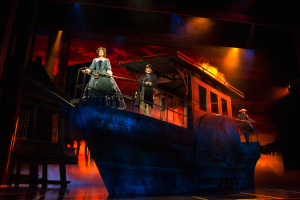 The Michael Yeargan-designed sets are simple and utilitarian, yet spot-on. Just when I was pondering what to write about them, my friend leaned over and whispered, “Great sets!” The show begins in a spectacular fashion, with a ship onstage. I’m so thankful that the rain that night did not make us late-arrivers, because I would have hated to miss that.

I could go on and one about this marvelous production of The King and I, but you really must see it for yourself. And not just here in LA; remember–it’s touring the country! So, many of you will have your chance. 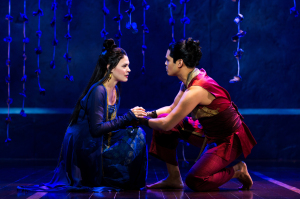 There’s actually only one little thing I dislike about Rodgers and Hammerstein musicals—in a bunch of them, someone dies. (They’re like Disney films! Remember Bambi’s mother, anyone? Just sayin’.) I hate going from so happy to so sad. In this one, for instance, I was on edge the whole time, knowing that at least one death was coming.

But try not to think about it; nothing is done painfully. Just enjoy the iconic music, the wonderful performances, and the absolute spectacle that’s presented the entire time, which just flies by. And we’re lucky to have it playing in LA at this time of year–it’s a lovely holiday activity, for the whole family.