Trending
You are at:Home»THEATRE»THEATRE: THE JOY LUCK CLUB
By Karen Salkin on August 28, 2019 · THEATRE

Sort-of surprisingly, I’ve never read the book nor seen the film, so I thank Sierra Madre Playhouse for bringing The Joy Luck Club to us Southern Californians.

It’s that theatre’s most ambitious production that I’ve seen in the four years since I discovered this wonderful place. And the show totally works! 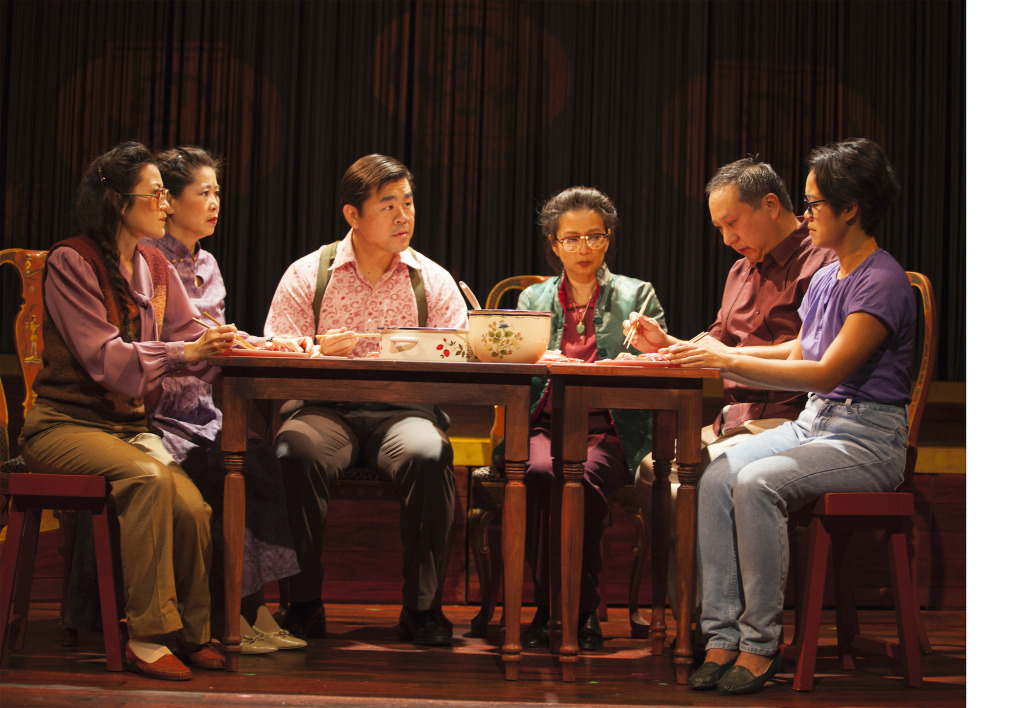 (L-R) Christine Liao, Lee Chen, Victor Chi, Sharline Liu, Christopher Chen, and Nancy Ma. Photo by Gina Long, as is the one at the top of this page.

This baker’s dozen was the biggest roster of actors I’ve ever seen at SMP. And it’s extra-special because this is the first time the play has ever been performed with an all-Chinese cast! It wasn’t even done authentically like that in the movie version.

The Joy Luck Club is the saga of the strained and stressful relationships between a quartet of older women from China, who now live in  San Francisco, and their American-born daughters. The tales are inter-woven, and even the mother characters hark back to their own mothers. The plethora of stories changing so quickly could be very confusing, but they definitely are not in the hands of director Tim Dang. It’s all very clear. 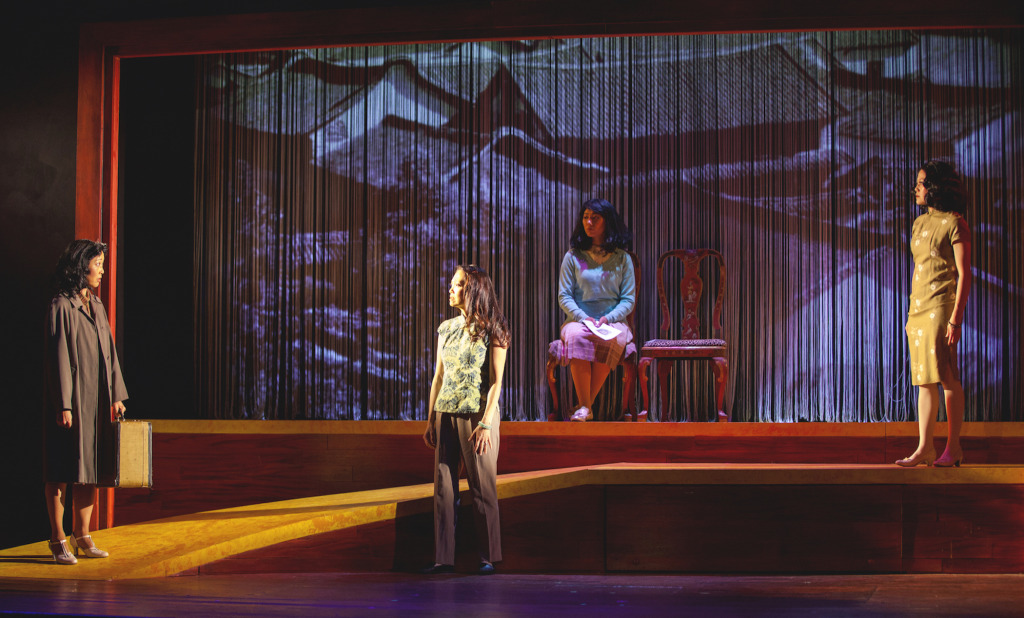 As someone who had a great bond with my little mo, it’s hard for me to understand all these not good connections portrayed on stage. While I guess it would not be an interesting theatre piece if it was all fun and happiness, it’s a tad hard for me to get behind all these very sad or disturbing stories; they’re all very interesting, but also depressing. How could every single character in the narrative have a bad relationship with her mother? It doesn’t seem possible to have not even one happy maternal story out of eight. But that’s how the book was written and is no reflection on this excellent production.

So, if there’s a take-away from this show, (aside from that it’s fascinating theatre,) it’s to make sure to grill your elders about their lives while you have the chance, so that you never have questions after they’re gone. And that’s a lesson everyone should learn, especially in this most entertaining way. 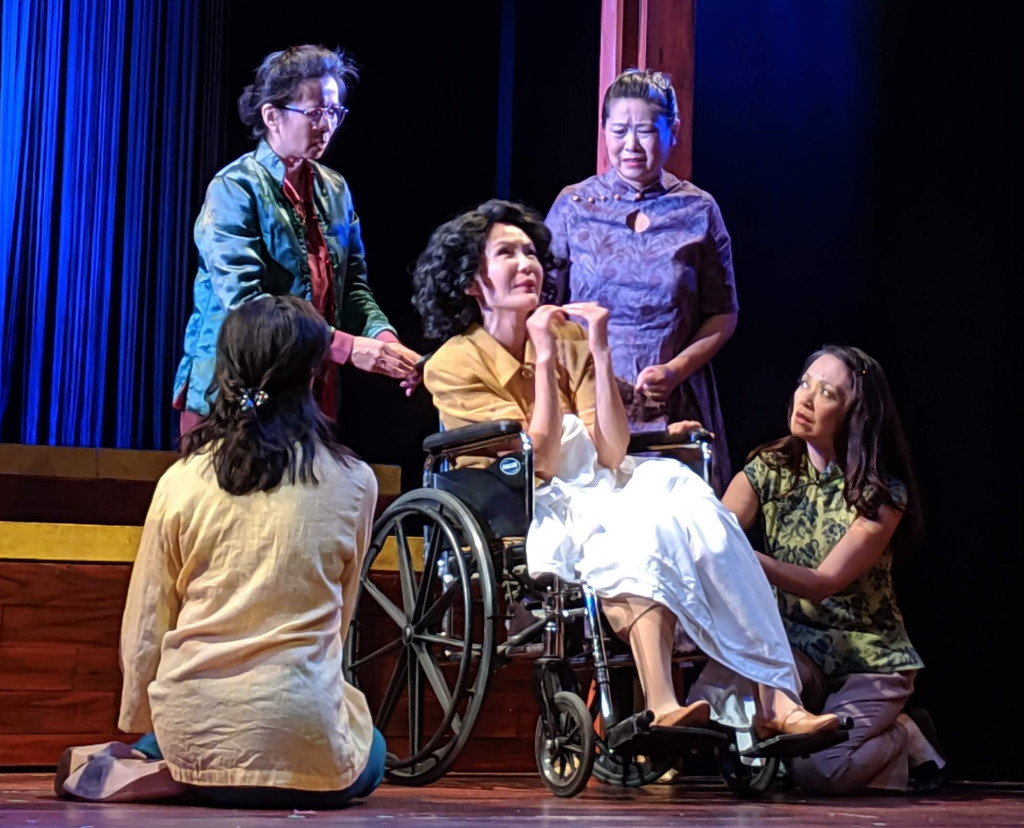 As to the actual SMP production, all aspects of it are high quality, especially the acting, which sees every actor ably play either themselves at different ages or multiple characters. Or, in some cases, both. I’m especially impressed that many of the women let us know that they are now portraying themselves as children by just a flick of the head or a different smile. It’s quite impressive.

In the technical categories, the multi-level set by Yee Eun Nam is uncomplicated and perfect. The changes in locations and eras are defined with just simple movements of tables and backless chairs. That furniture choreography is done so easily that it’s all really barely noticeable. And I was in the third row!!!

The most impressive job was done by Jojo Sui on the very many changes of wardrobe! I haven’t seen that much clothing from different eras since I looked in one of my forgotten closets. (When my parents were once visiting, my father opened my main closet, full of my crazy outfits, and asked emphatically, “What is this?! Costumes???” And back then, it was mostly just my daily attire!) 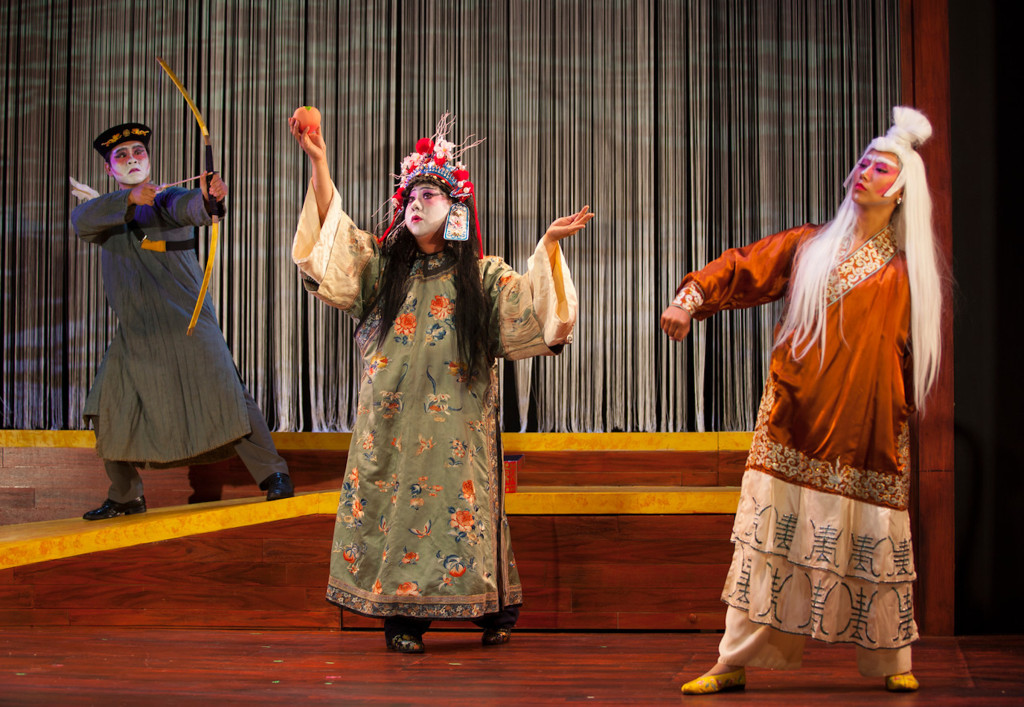 When you see The Joy Luck Club for yourselves, (which I know all my SoCal readers will be smart enough to do,) I suggest you go to your seats a tad early, so that you can enjoy the light, lilting music and delicate shadows on the back curtain before the show. That little extra bit of creativity really sets the mood for the rest of the evening. And later on, during the play, that same backdrop space features Nam’s lovely and helpful background projections.

There’s one moment of the narrative that I especially enjoyed. One of the characters speaks about someone of whom she says they were “best friends and archenemies.” That’s what I’ve always said about my main pal in sixth grade! I’ve never heard that expression anyplace else, so I really got a kick out of hearing it here. And I certainly know exactly what she means! 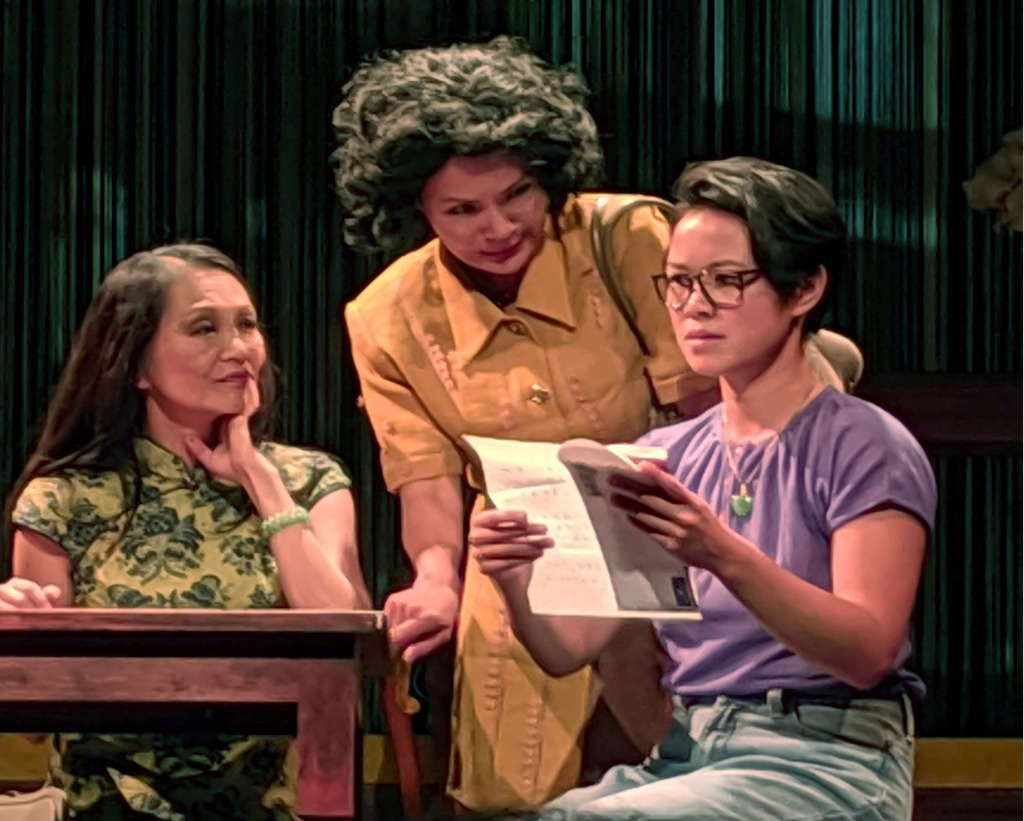 Speaking of friends, I brought one who had never been to the Sierra Madre Playhouse before, and she loved it as much as all of us do! She’s still raving about it! She would have been as fond of that whole experience even if she had not hit a particularly juicy opening night. Because of the extra-special presentation that The Joy Luck Club is, there were special touches at the theatre throughout the evening. Wine was served as we entered the premises, and then again at intermission, along with a fruit platter and…egg rolls!!! How cute and thoughtful. And appreciated! (By me, at least.) And then there was a bustling after-party at the perfectly appropriate restaurant right across the street, Sierra Fusion. Their fare was spot-on and the servers could not have been more amiable. I’m so glad that I got to chat for awhile at the fete with the adorable Gedde Watanabe, who was there supporting his fellow Asian show biz peeps.

Speaking of ethnicity, I can attest to that all audiences will appreciate this show, regardless of ethnicity, age, gender, and if they have their own children or not. The story’s appeal is universal, and not at all exclusive to people of Chinese heritage. As a matter of fact, the game of Mahjong, the activity that’s central to the plot, has been so appropriated by my people that I forgot who began it! And the line in The Joy Luck Club about that very subject is worth the price of admission alone!