Trending
You are at:Home»THEATRE»THEATRE: THE HUMANS
By Karen Salkin on June 22, 2018 · THEATRE

After six major winners in a row, the Ahmanson finally has a presentation I am not totally in love with. Still, the highly-anticipated The Humans is worth seeing, as long as you can deal with other people’s angst. And I’m in awe of any play that can make my family seem normal! 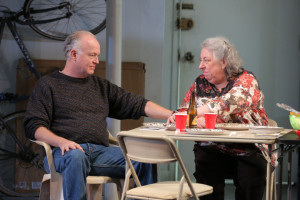 There are a lot of laughs, but other than that I’m afraid I don’t really see the big deal about The Humans. This tale of one East Coast family’s holiday dinner is basically a funny enough show whose trying-to-be-profound ending didn’t cut it for me. When it was on Broadway two years ago, it won the Tony for Best Play, and the people playing the parents, Jayne Houdyshell and Reed Birney, (who are reprising those roles here in LA,) both won acting Tonys for their performances. Of course the two actors are excellent, as is the rest of the six-person cast, but I really didn’t see anything extraordinary about the performances. Because those awards gave me such high expectations, I kept waiting for some amazing scene(s) from them, which never came. I felt the same way about the play in general, despite really enjoying three-quarters of it.

I think the main problem with the production here in LA is that it’s way too intimate a show for the spacious Ahmanson Theatre. I think it would play much better at the Taper, where we, the audience, would feel more involved in the action. On opening night, instead of being a fly on the wall, I felt like Jimmy Stewart in Rear Window—I was aware that something was going on in that apartment across the way, but couldn’t quite make out what it was. [Note: On Broadway, the play was first in an under-600 seat theatre, and then when that place had to close for awhile, the new venue had just about a thousand seats. The Ahmanson has close to two thousand!!!]

But at least the bigger theatre means that more people will get to see it in LA, the last stop of The Humans’ National Tour. If you’re one of them, just make sure to not sit back further than mid-audience, not only to see the actors’ faces better, but also because, for some reason, the acoustics are not good in there this time. I sat towards the rear of the orchestra, and I lost every few words, and didn’t hear many of the lines that made the front of the house laugh. (And I have bionic ears! Just ask Mr. X, who often wishes that I didn’t.)

I still recommend seeing this intelligent offering, for the laughter-filled journey. The humor is what makes it worthwhile. But I feel that it should have been written as a comedy only, without getting unnecessarily heavy at the end. That bit made The Humans as upsetting as it is funny. I enjoyed the ride, but not the long, drawn-out conclusion, (if there even is one.) 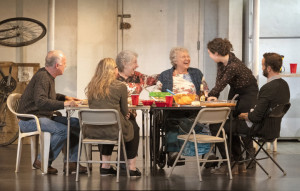 The action takes place in New York on Thanksgiving. So, at first, I thought that the Ahmanson should have been showing it in November. But by the end, I noted, “Now I know why they’re not showing it in the Fall–they don’t want to taint our holidays!”

My thoughts appear to be somewhere in the middle of the rest of the audience’s reaction to the show. For example, the guy behind me giggled pretty much throughout, while the guy next to me just kept sighing, and did not laugh even once! I laughed a lot, but basically felt nothing for the last fifteen minutes or so. And the intelligent also-from-New-York friend who accompanied me that night went so far as to call the whole thing “banal.” I have to admit that I do see his point. The Humans might have been groundbreaking twenty years ago, but the plot devices are all sort-of pat now. (E.g., young couple living together with no plans of marriage, lesbian sister, illness, infidelity, senior family member who needs care, money troubles, annoyingly caring mother, etc.) But I have to repeat that the show is very funny.

As The Humans went along, even through my laughter, I kept wondering what the point of it was going to be, because most plays do have a point. And then, when the way-too-long end came, my first thought was “big deal.” I basically felt nothing but relief that it was over already. But, to be fair, (as I always try to be,) I then went back over the entire scenario in my mind, (as we all did at the end of the movie, The Sixth Sense,) to see if any of that “reveal” had been hinted at by the characters’ actions in the previous hour and a half. But sadly, it had not. There was no indication from the two grown-ups of what was happening in their lives up to that point. I’m assuming that fault lies in the writing, but some of it might have to do with the direction, as well.

But now let’s get to the many positives, including the plethora of clever lines, delivered by superior actors. My favorite part of the whole presentation is the way the action continues all over during scenes of two or three people’s intimate conversations, just as in real-life. But, somehow, our attention is focused on that particular dialogue while the other characters go on about their business. I really admire how naturally that’s all done here. 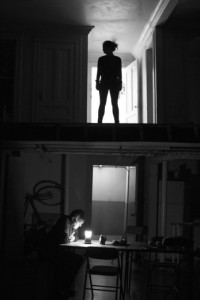 David Finn’s set is close to brilliant. Being from New York, I really appreciate the perfect low-rent duplex apartment in Chinatown that he depicts. (And his Tony for it I totally understand!) It reminded me of so many of my friends’ starter abodes; sort-of creepy, yet livable enough. (But I could not figure out for the life of me where the bedroom is. I’ve had that problem with many apartments in that crowded city, though.)

And the lighting, by Justin Townsend, matches the creativity of the set. Since the topic of light is a big part of the play’s narrative, that design is especially important. When the door to the bathroom opens for a bit, with that glaring bright light amongst the relative darkness everywhere else in the tenement, my jaw dropped because I loved it so much! I couldn’t even pay attention to what was going on elsewhere on the stage during that little episode! [Note: The mood is set before the play even begins by the house lights being just halfway on in the theatre as the audience enters. Clever touch, but it prevented me from seeing who else was there that night, which is half the fun of going to the theatre, n’est pas?]

And for once, the wardrobe, by Sarah Lux, is so perfect that I almost didn’t notice it! (But I did have eyes for the younger sister’s outfit, which I would totally wear myself, except with much hipper and less-cheap-looking boots. I guess my good binoculars finally came in handy!)

The actors are all equally good. But the hardest role, to me, is the boyfriend, played by Nick Mills, (which is a perfect name, by the way,) because he doesn’t have a lot to say, but has more “business” than anyone else I’ve ever seen on stage. That poor guy has to prepare an entire Thanksgiving dinner, and set the table, on stage…every night! And do it all twice on Saturdays and Sundays!!! I hate doing it once a year!!! (Okay, once a decade—we usually go to friends’ houses so that I don’t have to cook myself. It’s just too hard to create a great turkey while rocking gorgeous nails.)

The grandmother role gave me hope, in case I ever want to resurrect my former acting career. It’s the kind-of part I love—murmur some nonsense every now and then, and then lie down for the rest of the show. Where does future me sign-up?!

I was terrified of Jayne Houdyshell on a recent Quantico, (where she was an uber-villain, a credit she surprisingly left-out of the program here,) so seeing her as a regular housewife and mother in The Humans was a pleasant surprise. That’s versatility! 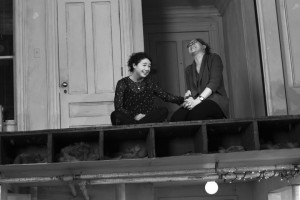 The sisters, played by Sarah Steele and Cassie Beck. Photo by Brigitte Lacombe.

The young couple, who doesn’t have any real drama going on in their lives, as the rest of the family does, is probably the most interesting to me. I had thought that Sarah Steele was perfectly cast as Alan Cummings’ daughter on The Good Wife, so I was already a fan. And the guy looked just like the new screenwriter boyfriend of one of my good friends, so I felt like I kind-of knew these two already, which I think helped my comfortability a bit. They gave me characters to root for, which is always a good thing.

Let me conclude this review by getting back to something I alluded to at the beginning of it. Here’s the thing about expectations: when they’re high, as mine were for this play, they’re almost always sure to not be met. But when they’re low, they’re usually exceeded. So, now that I’ve set yours somewhat lower than mine were going in, you’ll most likely enjoy The Humans a bit more than I did. And I hope you do.