Trending
You are at:Home»THEATRE»THEATRE: THE GREAT LEAP
By Karen Salkin on November 22, 2019 · THEATRE

What a powerful play this is! I was blown away by it. And still am, a few days later.

I was feeling terrible that I had to miss The Great Leap’s recent opening night, (because of a sick friend,) but after having met director BD Wong at the opening night party for the Pasadena Playhouse’s previous show, I just knew I had to see this one any time during its run. 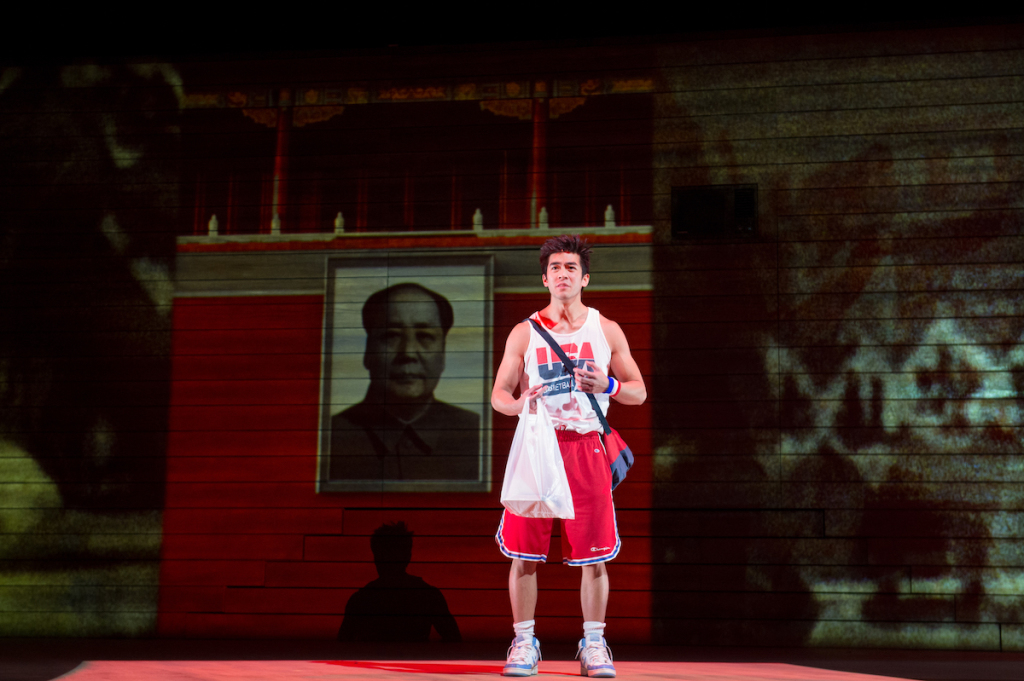 Justin Chien. Photo by Jenny Graham, as is the one of the entire cast at the top of this page.

And, boy, am I glad I did! Three quarters of it is a laugh riot, and then the rest is pure emotion. I couldn’t breathe by the end of it.

The plot of The Great Leap, which takes place in 1971 and 1989, is too hard for me  to boil down to just a line or two, so here’s the official description: “When an American basketball team travels to Beijing for an exhibition game, the coaches find themselves in a conflict that runs deeper than the strain between the countries, and a young player’s actions abroad become the accidental focus of attention.” 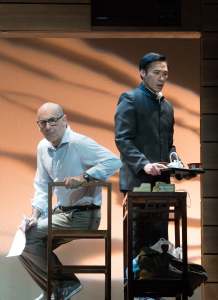 I’ve never been particularly political, except for faking it in college because it was the thing to do, and downright detesting the lunatic at the head of our government right now. So I’ve buried my head in the sand a bit over the years, to shield my psyche from the details of so many atrocities around the world, including the horrors that have always happened, and continue to occur, in Big Brother societies such as China.

But The Great Leap got to me in a big way, and not just for the humongous entertainment value. I felt something for every character even mentioned in it. I realize that many viewers might be drawn to the political aspects of the narrative, but I was more drawn to the human. The use of historical images throughout is quite interesting, and combines both facets.

The writing by Lauren Yee, (especially the sports references, which I’ll discuss in a second,) and direction by the very handsome BD Wong are just about perfection. The only slightly negative thing I have to say about the entire production is that I found a small desk on the side of the stage to be distracting in a major scene near the end, like someone forgot to remove it on time. But that’s it. 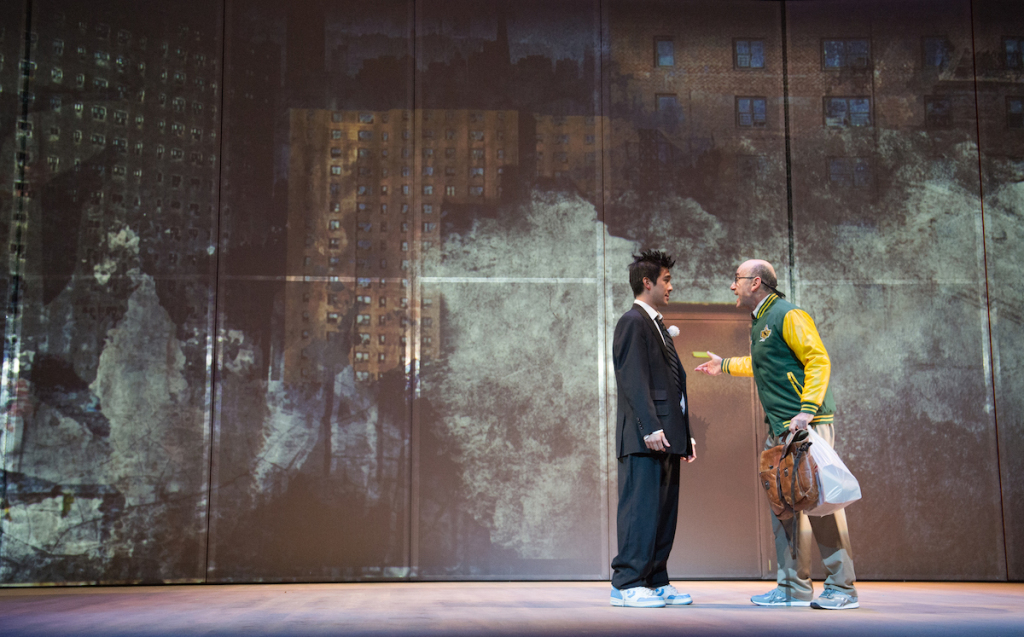 The four-actor cast is all excellent, but Grant Chang, as the Chinese basketball coach, absolutely blew me away. You could hear a pin drop during his emotional monologue near the end. I have a feeling it will haunt me for a long time. I can cry just thinking about his heartbreaking performance.

On top of all that, his accent is so authentic that I actually believed that he is Chinese and struggling with English!!! But he’s a fellow New Yorker, which I positively could not tell. 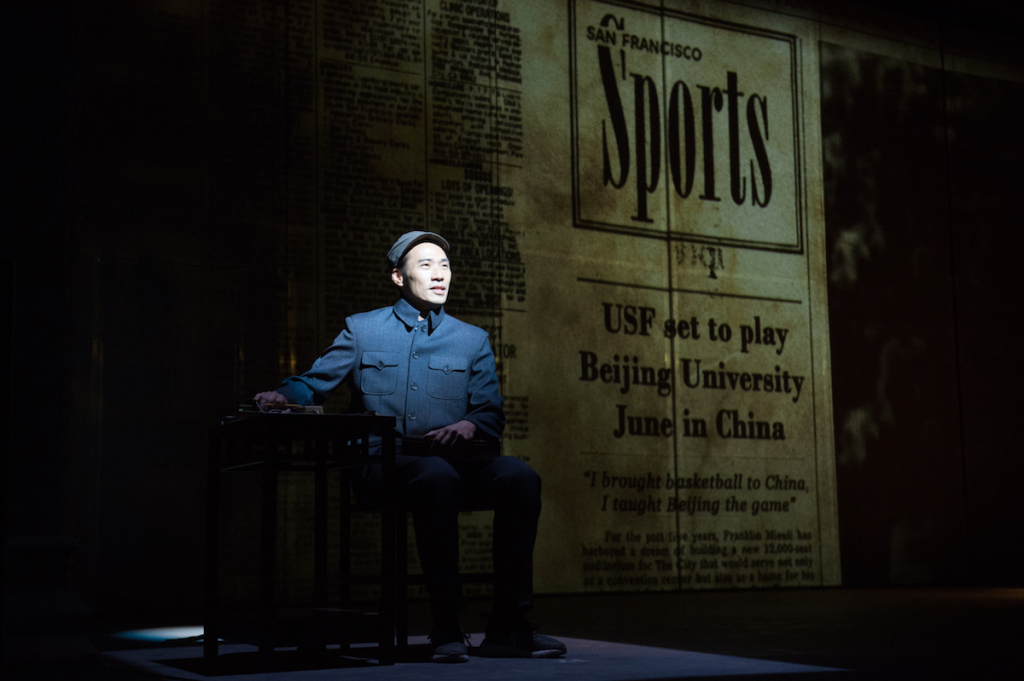 On the other hand, James Eckhouse, who is not from New York, is spot-on as the amusing American coach from the Bronx. He reminded me so much of legendary basketball coach and commentator, Dick Vitale, that I kept expecting him to say, “Awesome, baby,” at any time.

And Justin Chien, who plays the young Chinese-American ball player, is just adorbs! I saw him for the first time exactly a year ago, in the Mark Taper Forum’s Valley of the Heart, but he got to really shine here in The Great Leap. Now I look forward to the rest of his career.

Christine Lin, as the lone female in this quartet, held her own, too. But I’m most impressed by her BSE degree in electrical and biomedical engineering from Duke University! I don’t understand why anyone would want to act when they can potentially save the world through medicine, though. Maybe she was inspired by Ken Jeong. 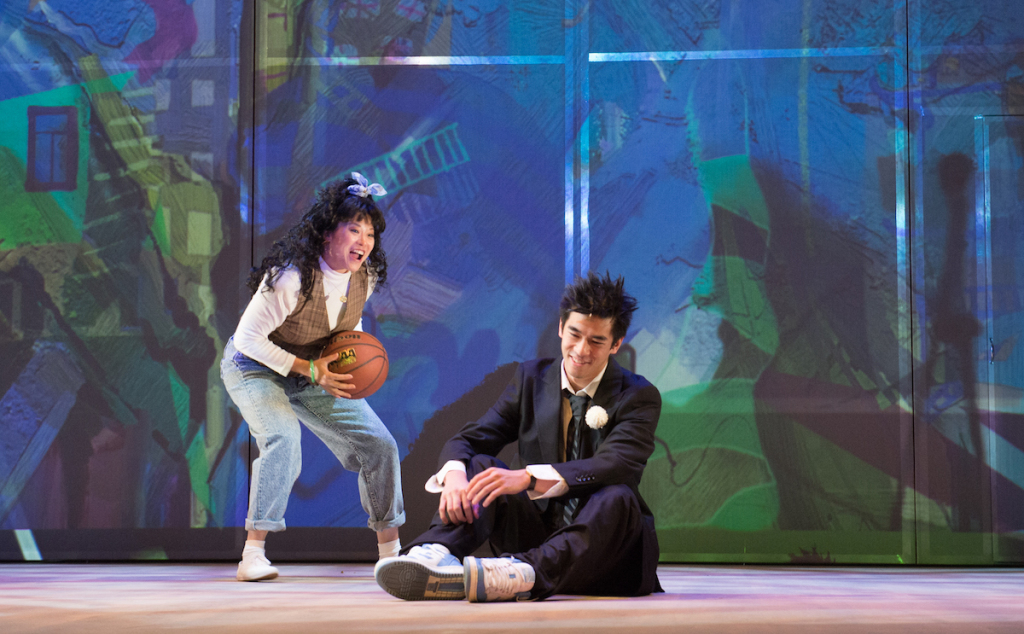 Since, as most of you may know, I’m not only a major sports fan, and one of basketball in particular, but I also used to host sports radio broadcasts. So I was uber-amused by all the baller references, especially in the first act. The pal I saw this show with had no idea what the characters were talking about, but I was happy to hear that most of the assemblage was laughing along with me.

One of the lines I was struck by is the American basketball coach telling his players, “It is always your turn.” That really resonated with me on a few levels, but on the most shallow one, isn’t that kind-of the subtitle of this e-zine? I know it’s titled “It’s Not About Me,” but, in case you never noticed it, right underneath that heading is, “But it really is!”

Speaking of the excellent playwriting, I advise you all to not space-out for even one second of dialogue when you see The Great Leap, or you’ll be sure to miss many golden bon mots. 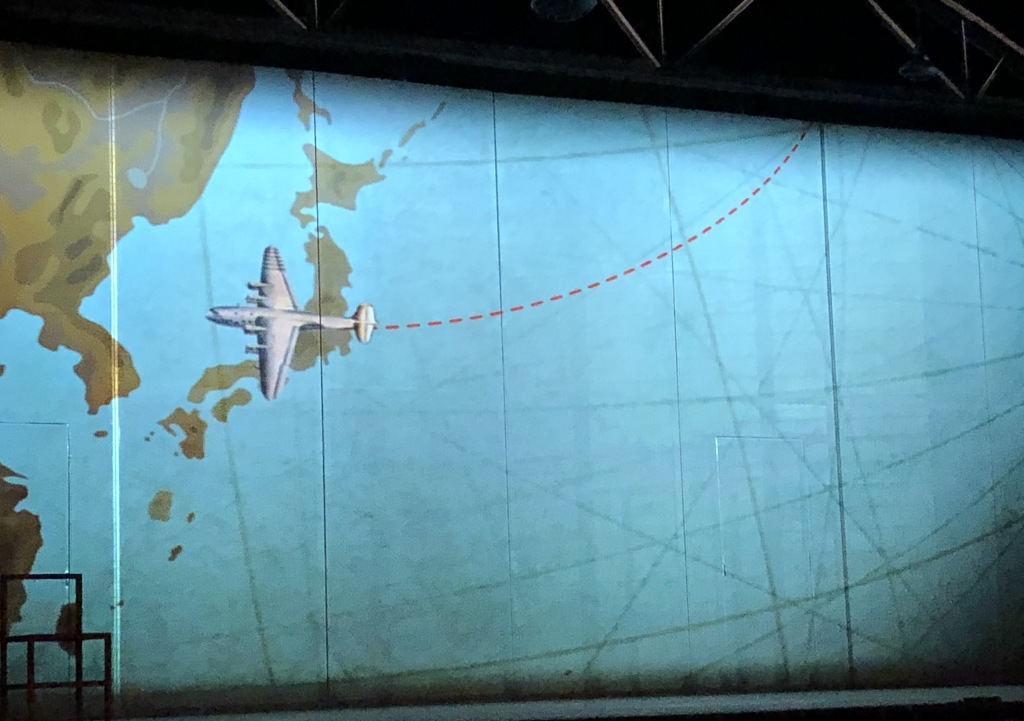 I’m actually glad that I saw The Great Leap with a regular audience, which was quite the different experience for me. Here’s why: when an opening night audience gives a standing ovation, I more often than not feel like we’re obliged to, because we’re all invitees. But this spontaneous standing O with the normal-night audience felt compelled because it was so deserving. 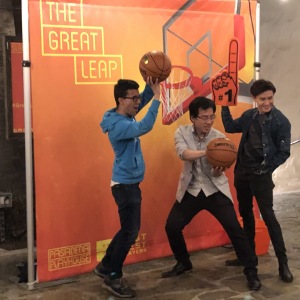 And I really enjoyed this touch of cleverness to the proceedings: The on-stage curtain at intermission features a screen showing an airplane’s route. And that plane moves slowly the entire time, which lets the audience know when Act Two will begin. So you can stay in your seat and watch its progression, or go out to the patio for one of the cutest photo ops ever. It’s a giant backdrop of the show’s logo with an image of a basketball hoop on it, and there’s a container on the ground filled with a basketball and other fun stuff. So you can have your friends take pix of you dunking the ball!

Okay, I can write no more because…I have to go watch basketball! And be extra-grateful for that land-of-the-free (for now) experience.