Trending
You are at:Home»THEATRE»THEATRE: THE DAY SHALL DECLARE IT
By Karen Salkin on March 9, 2015 · THEATRE

THE DAY SHALL DECLARE IT

I must admit—I had no idea what was going on in this very different show. (At the end, my friend, Alice, summed it up as such: “That sh*# was deep!” I guess I’m just not deep enough to have understood it.) But I really enjoyed the experience anyway!

Despite the actual show being not my cup of tea, at all, I have nothing bad to say about the production. I totally appreciate the amount of work that went into it.

The best way to describe The Day Shall Declare It is to say it’s basically a follow-the-actors-around performance-piece-meets-play, set in the 1930s or ’40s. The cast is one female and two guys, and they move around the most interesting space while quoting from Tennessee Williams and Studs Terkel. 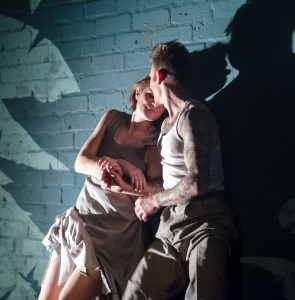 The company itself describes it as “an immersive, physical theatre installation exploring the concept of work,” which my friends joke that I know nothing about, but which it seems is the only thing I do nowadays! (And yes, going out every night to events that ask me to write about them is work!!! Hard work, actually. Unless it’s something like Dame Edna or Cinderella!!!)

So, here are the scoops on the show: it’s in that different part of downtown, that’s away from the Music Center and LA Live. There look to be a lot of warehouses around there. The Imperial Arts Studios is actually a 1925 warehouse itself.

It has that “Joe sent me” kind of vibe to it. And when we first entered the space, I felt it was a little like Knott’s Scary Farm, and guys in costumes were going to jump out at us. But by the time we got to the back bar, which is where the audience gathered, (and where you can buy actual drinks, for donations only,) and then the first scene took place, I was enthralled with the experience. I felt like I was in Greenwich Village, late on a winter’s night. I love that feeling!

Even though it’s a smallish space, the audience (no more than thirty people are accepted each performance) follows the three actors around. And when I saw it, everyone seemed to know that it’s okay to stand almost in the actors’ faces! Every one in my audience was a newbie, except for two, and yet they all seemed very comfortable just standing right in the middle of the action, rather than around the periphery. That was just strange to me, but the actors seemed to enjoy it. If someone was standing in the wrong place, the cast just gently moved them out of the way as they went along. And they even occasionally had private conversations with certain audience members. That way of performing is just strange to me, but every other person in that space was riveted to the action. Riveted, I tell you.

So, honestly, I can’t really say what the show is about, from my firsthand experience. I can tell you what the people involved with the production say it’s about, but you can just go to their website and read that for yourself. (And because, even with my 147IQ, I don’t really understand their explanation either.)

But trust me, the contents of the written work don’t even matter, in my opinion; it’s the experience that counts. And you will not find anything like this anywhere else in LA. It’s so incredibly different. The actors practically fly around the set, because movement is one of the basic components of the piece. And that’s what I was watching, rather than listening to the words. I was fascinated with what they were doing, even when I had no idea of the supposed motives behind the action. (One guy appears to be the woman’s husband or boyfriend, after we see them meet in the very first “scene.” Then later, the other guy seems to be in that position. The guys look so much alike, but the second one has tattoos, so we weren’t sure what was going on.) 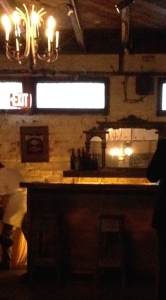 A tiny snippet of the bar area, before the show. Photo by Karen Salkin.

My favorite part of the whole shebang was the old-time set, by Nina Caussa. It was perfect! If this had been a film, she would have received an Oscar for Set Decoration!

And here are a few more good things about The Day Shall Declare It: not one audience member even attempted to text during the show! No one even had a phone out! I think that’s the first time I’ve seen that in Los Angeles in about ten years.

Another good thing is that you absolutely do not have to wear a stitch of make-up, nor good clothing. You can even show-up with dirty hair, if you like! It’s really dark down there, and unless I’m in your audience, (because I check everybody out,) nobody is going to look at you at all.

The performance takes about an hour and a quarter, and you’re standing the entire time, so make sure you wear comfortable shoes, and don’t carry a lot of stuff with you. (A coat check is available, though no one in Los Angeles brings extraneous outerwear with them to any place, ever.)

And the staff is very accommodating to people who need to sit rather than stand, as long as you make prior arrangements. (They can accept only two “sitters” per performance.) I can’t stand for more than a minute or two because of my broken back, so the kind girl who was running the place, Rachel, brought a chair from scene to scene for me. Very appreciated.

I do have to give you one warning, though. In one scene that lasts about three minutes, there are strobe lights. So, if they affect you as badly as they affect me, you can always close your eyes tight, and have your companion tell you when they’re over.

I’m still not sure what the Day “Declared,” but I declare this show to be a worthwhile experience.

The Day Shall Declare It running through March 22, 2015 (But they may extend)
Imperial Arts Studios
2051 East 7th Street, Los Angeles
www.thisisthewilderness.com