Trending
You are at:Home»THEATRE»THEATRE: THE CHINESE LADY
By Karen Salkin on September 12, 2019 · THEATRE

This play should be required viewing for everyone in this country! Prior to seeing The Chinese Lady last week-end at the Greenway Court Theatre, I knew of the histories of the plights of American Indians, Jews, African-Americans, and Japanese in the United States, but I had never even given a thought to what Chinese people had gone through here! So, in addition to being entertaining, this play is very enlightening. 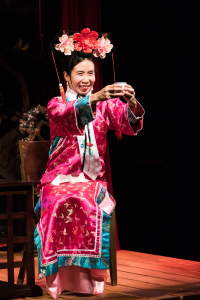 Amy Shu. Photo by Michael C. Palma, as is the big one at the top of this page.

It’s actually quite the dichotomy; The Chinese Lady is very funny and super-disturbing at the same time. (It basically backs-up what I’ve always said about painful situations—finding some humor in them definitely helps to ease the misery a bit.)

It’s the story of Afong Moy, who is considered to be the first Chinese female in America. The action takes place in 1834, when she was only fourteen, and her father “rented” her to American businessmen who put her on display in New York as an attraction!!! It must have been awful, but at least she wasn’t in a cage; she was in a room of a museum of sorts, surrounded by artifacts from her homeland. People paid to gawk at her, listen to her speak Chinese, watch her eat with chopsticks, and walk on her tiny feet, which had been bound since birth to make them so petite. (Those crazy rich Asians!)

Afong’s words are fictionalized; unfortunately the actual storyline is all too real. It’s based on her true saga. But the play is the playwright’s own take on what her thoughts might have been in actuality. Lloyd Suh did a great job writing it; he keeps us laughing along the way, leaving most of the heavy lifting until near the end. In the middle of it, my friend said, “Very charming, isn’t it?” And it continued like that for quite awhile.

But how could the story have not gotten heavy when Chinese people were so abused back then?! I had never even heard of the Chinese Exclusion Act until this show, and now I know how horrible it was. 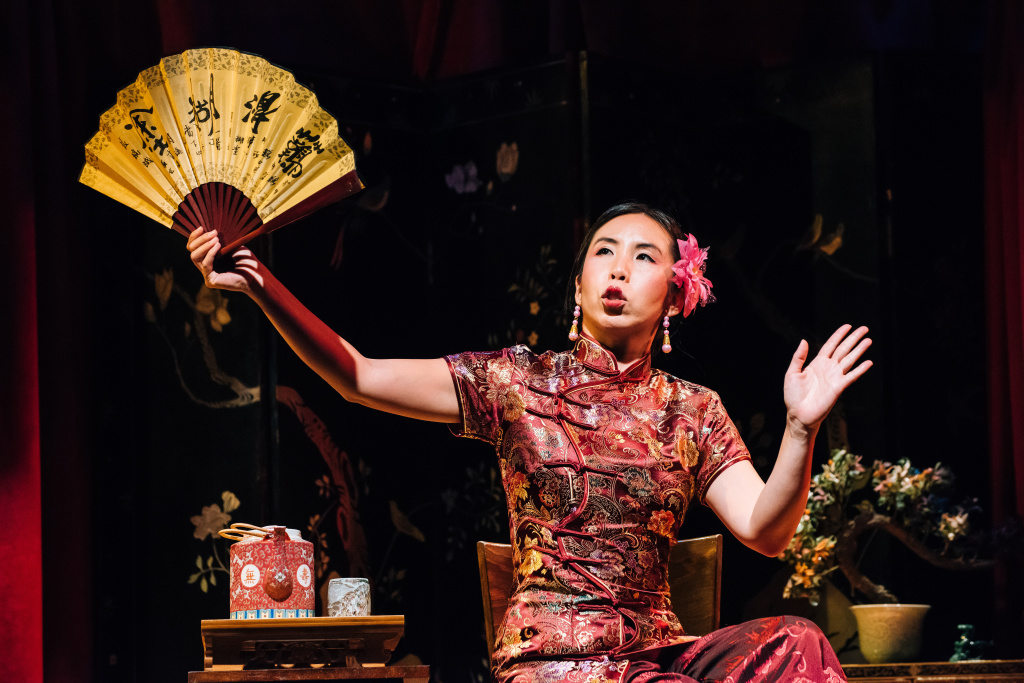 And that makes The Chinese Lady not just entertaining and informative and historic, but yet another cautionary tale for Americans to try to stop the unbelievably insane and unfit head of our government from doing that sort-of thing to yet another group of immigrants to this country! I was so upset by the last fifteen minutes or so of this play on so many levels. But those words must be heard. I was still very affected by it the next morning. (And every day since I saw it, actually.)

I was happy to see so many intellectually-curious people in the audience. (And they all looked cute and casual; there was just something so nice about the entire assemblage.) Usually, when a theatre is packed like that on an opening night, we assume it’s friends and family of the cast. But for The Chinese Lady, there are only two people on stage, so that was definitely not the case here! That means that there are a lot of people who are smart enough to want to see this very worthwhile show. 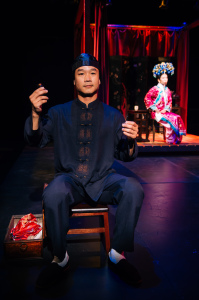 Bringing this worthy tale to life are Amy Shu as Afong and Trieu Tran as her translator and, really, only friend, Atung. The weird thing is that it often seems like a one-person show, but with two people. Amy does about ninety percent of the talking, but then Trieu has a powerful major monolog in the middle. Even in the earlier stages, where he basically just utters a sentence or two here and there, his presence adds so much to the proceedings. And that presence grows even more as the show goes along. They’re both excellent actors.

Amy is perfect for the role. And she doesn’t even have tons of acting credits; she’s actually in school, working on her Masters with an eye towards teaching! Her students will be as lucky as her audiences because I can just tell how interesting and successful she’ll be in the classroom, as well. No only does she possess the spot-on graceful movements that the real Afong was known for demonstrating to the crowds, but Amy’s face shows absolutely every age her character tells us she is at each stage of the narrative. She ages in front of her eyes with no change of make-up. That’s pretty impressive.

Also impressive is the use of the stage at the Greenway. It’s a pretty big space, but little of it is used, which is part of the point. It’s such a clever, simple set, designed by Austin Kottkamp. It’s mostly bare at the start of the play, except for a small stool up front, (from which Atung awaits his calling from Afong,) and a giant “box” hidden behind a red curtain at the back. And then Atung pulls out the square box with the curtain, and opens it to reveal…Afong in the room that is basically her display case for most of her life. 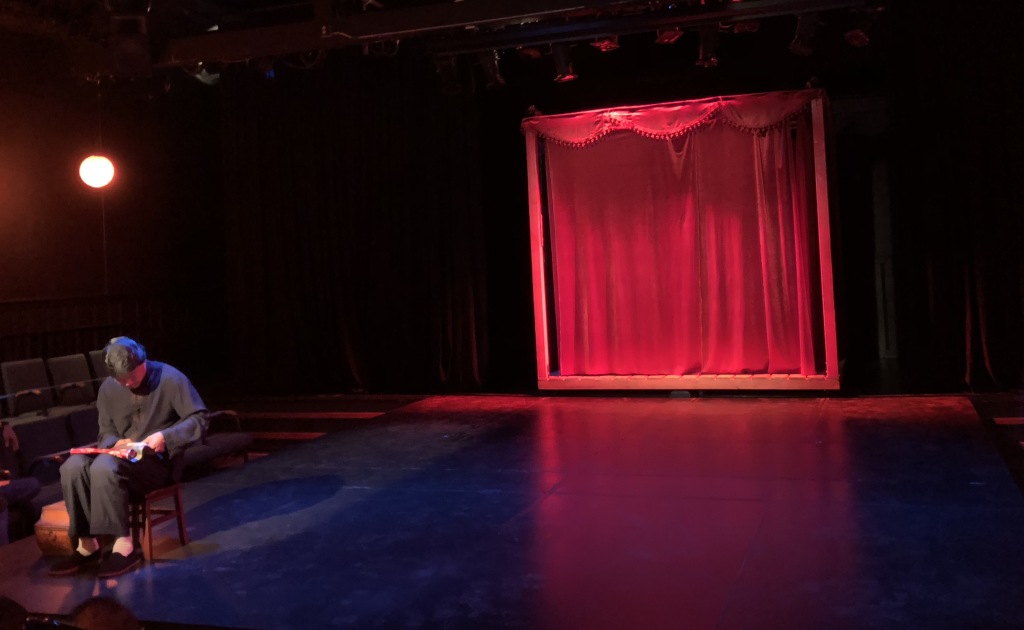 Adding to the atmosphere are red Asian lanterns hanging at intervals around the newly-configured three-sided audience seating area. And the interesting occasional unobtrusive music is a plus, as well. Director Rebecca Wear does an excellent job with the entire production.

Although the real Chinese Lady’s circumstances are very sad, I found some amusement in that there are two aspects of life that Afong Moy and I actually share! (I know—very weird, right?) The first is that Afong being on display for the admission price of twenty-five cents reminded me of my own time in the circus. No, thank goodness I was not forced into what for her was basically indentured servitude, but people did pay extra to see my act, which was just insane! They actually paid twice! Once to get into the Side Show, where I starred as The Divided Lady, Little Mina From Copenhagen. (Don’t ask.) I got “cut-up” in a box, and then people paid extra to come up and peek in to see me. In my red velvet bikini! It was so stupid, all the way around. (And, just like Moy, I didn’t see any of that money, either.) 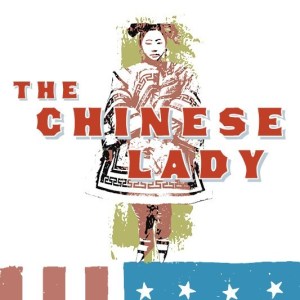 The other thing we have in common is petite feet. (And I’m actually kind-of tall.) Once when I was getting a massage, the masseuse started laughing when she got to my feet, and exclaimed, “Oh my god—you have such cute little cartoon toes!” I know exactly what she meant by that. My friends used to ask me if my parents had bound my feet when I was a youngster. (Yeah, right. My Brooklyn Jewish educator parents bound my feet. All the friends who asked that obviously didn’t think the topic through.)

Lastly, there are two tasty icings on this very delicious cake. First is that there is free parking in the Fairfax High School parking lot, right next door to the theatre. With so many venues around town having difficult parking, what a perk this is! The other icing is that when you see a show at the Greenway, you have a plethora of dining choices close-by, in every direction from the theatre. For the run of The Chinese Lady, you might possibly have a craving for Chinese food, as I definitely did! (And have had ever since!) I suggest Genghis Cohen, right across Melrose from the Greenway. (Just don’t leave your car in the lot—it closes a half hour after the show.) You may even know how to use the chopsticks better, courtesy of Afong!