Trending
You are at:Home»THEATRE»THEATRE: THE BEAUTY QUEEN OF LEENANE
By Karen Salkin on November 21, 2016 · THEATRE

THE BEAUTY QUEEN OF LEENANE

I would have never thought that I could laugh so much during such a terribly sad, absolutely joyless story. The playwright, Martin McDonagh, is a genius to have combined the two feelings so deftly into one tale. The whole journey is soul-crushingly depressing yet hilarious, which is hard to achieve in one two and a half hour play. [Note: This being the second play of McDonagh’s that I’ve seen, I have a feeling that a therapist could have a field day with him. His upbringing may possibly have been a rough one, for him to be able to write of such familial agony. Just sayin’.] 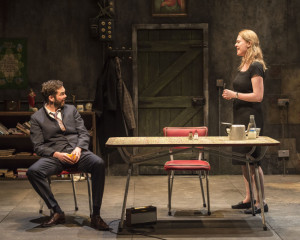 Marty Rea and Aisling O’Sullivan. Photo by Craig Schwartz, as is the big one at the top of the page.

I arrived at the opening night of The Beauty Queen of Leenane at the Mark Taper Forum direct from a cocktail party thrown by Tourism Ireland, (complete with a Riverdance style stepdancer,) so I was in a great Irish mood, and wanted to continue that beautiful country’s festivities by seeing this purely Irish play. It’s not just the story that is Irish—it’s everything about it—the writer, director, Druid theatre company from whence it came, even the actors.

And I was all Irished-out for it. (Sadly, I was the only one at both events who was! I not only wore a green dress and bracelets and even eye make-up, but I had spent over an hour searching my extensive jewelry collection for my shamrock earrings, just to successfully rock them for the occasion, if only for my own amusement.) So, what a perfect duet of events this was! I could not have planned it better if I had coordinated them myself.

My happy leprechaun mood was dashed, though, as soon as the play began, and I realized the sadness that was to come. Francis O’Connor’s barren set let us know right away that the play would not be an upbeat one. It was an immediate portent of the depressing tone the action would take from the outset. 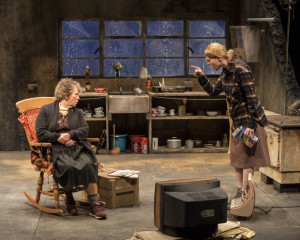 The play, about a straight-out abusive (on both sides) mother-daughter relationship, was actually quite the opposite of my own life experience, so the whole thing was more than a bit foreign to me. I always felt privileged to do things for, and entertain, my witty little mother. But she was quite the opposite of the demanding one in the play. I went home to New York very often after my father died, to help my mother, and whenever I’d choose to stay home with her instead of going out with my friends, she’d say, “Oh, Karen, just go already. Stop being crazy!” And then she’d add, “Just bring me a hot dog, please, if you find one.” That remembrance still brings a smile to my face.

Conversely, the purpose of the rotten mother in The Beauty Queen of Leenane is to hold down her spinster daughter, and prevent her from experiencing any happiness in life, even for one second. In turn, the daughter is awful to her mother. The action is a bit hard to watch, actually. But the dialogue and all four performances are brilliant, which kept me riveted to the stage. Even with all the emotional pain, I never once thought of leaving the theatre. 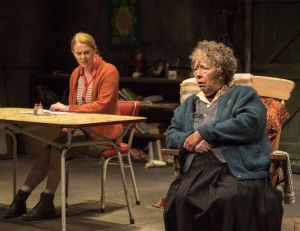 I especially love the fact that Marie Mullen, who plays the mother here, won a Tony for this show on Broadway two decades ago for her portrayal of…the daughter! Talk about full circle. She’s so fully the mother this time around that I can’t picture her as anything else. I wish I had seen Marie’s performance back then, but then the show would have made me extra-crazy about my own mom that I might have left LA to move back to Brooklyn to help her even more! (Hey–maybe the playwright and I can get a group rate on that above-mentioned mental therapy!)

After speaking with about two dozen Irishmen and women at that fete earlier that evening, I can attest to that fact that the accents in this play are true, (they had better be, since the cast is all Irish; with monikers like Aisling O’Sullivan and Aaron Monaghan, how could they not be?!,) even if they are perhaps a tad exaggerated for the characters. The only problem with that is that my friend and I understood only about half of the dialogue!

Speaking of that, I was enormously impressed by how many times director Garry Hynes elicited yuks from just vocal noises, as opposed to actual words. But I was equally perplexed by the audience’s gasps at a few things that I saw coming a mile away.

As excellent as most everything about this production of The Beauty Queen of Leenane is, (even with all the sadness,) the staging had two big flaws, for me. The smaller one is this: There are two tiny photos of John and Bobby Kennedy hanging from a rafter (or something else high up) in the house, Not only are they minuscule, (I could hardly make them out even with binoculars!,) but they can probably be seen from only one side of the Taper, so the small reference to them near the end of the play barely made sense for the majority of the audience. 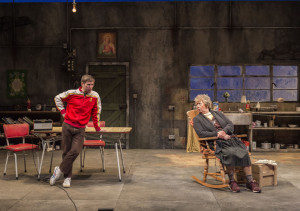 Much more egregious is that most of the play is performed with the mother sitting in a chair on house right, and facing somewhat diagonally toward that side, so I would assume that much of the action is lost to at least half of the assemblage. I’m just glad that I was sitting on that good side! But perhaps that’s just the Empath in me, worrying about everyone else’s experience. Judging by the constant hearty laughs on opening night, it seems that that bit of worry didn’t bother most others.

So, all in all, I do recommend seeing this show. Just maybe not right before your family Thanksgiving!