Trending
You are at:Home»THEATRE»THEATRE: STOP KISS
By Karen Salkin on November 11, 2014 · THEATRE

What a perfect evening the opening night of Stop Kiss at the Pasadena Playhouse was! The play was excellent, the audience seemed as one, and the after-party was one of the happiest I’ve ever attended.

I brought a young actress pal, (who’s not the least bit “actress-y,” by the way,) who had never been there before. As we entered the hallowed theatre, she exclaimed about how gorgeous it is! She was recently living in New York, and was used to Broadway theatres. I’m always a bit proud when I can introduce someone to the the Playhouse. (And I love that the usherettes always tell you the running time and intermission story as we enter. It’s great to know exactly what we’re in for, time-wise.) 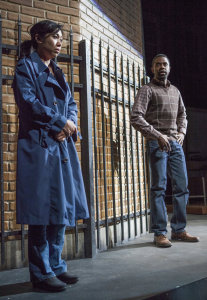 Angela Lin and Brandon Scott, in one of the more serious scenes. Photo by Jim Cox.

The play itself, Stop Kiss, has been around since 1998, (hence the setting in that year, although I feel that it could be anytime,) but this production, directed by Playhouse first-timer, Seema Sueko, marks the first I’ve heard of it.

You know I very rarely reveal the plots of the pieces I’m reviewing, but this is an important show, so, spoiler alert: If you don’t want the skinny on it, just come back after the next two paragraphs.

In a nutshell, it’s about a couple of post-college professional straight women (Angela Lin and Sharon Leal,) who realize they’re attracted to each other. A hate crime ensues. And the action goes back and forth between the recent past and the aftermath of the incident.

With this horrible kind of thing happening all the time, (and not just in New York, where the play is set,) the topic is, sadly, still very relevant. But I appreciated that the play doesn’t hit us over the head with it. Rather, it just tells a story, and lets us experience the emotions, (mine was sadness mixed with outrage,) for ourselves. It’s actually sort-of a story that could have possibly occurred behind a headline.

Okay, you can come back now.

Who would have thought a play on such a sad, serious topic would be so funny? Playwright Diana Son put a whole lot of humor into it. And Angela Lin’s delivery was spot-on, (although I wasn’t a fan of her often hard-to-make-out voice.) She wrung a laugh out of just about every line. (Well, in the non-painful scenes, of course.)

This production included a beautiful, and utilitarian, set designed by David F. Weiner, along with excellent staging. I usually hate time being portrayed in a non-linear fashion, but this one deftly blended the jocular and grave with ease, keeping us wondering exactly what happened, and how and why. 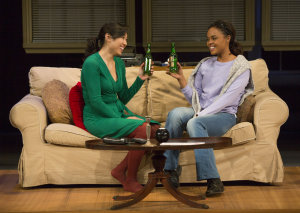 Angela Lin and Sharon Leal. Photo by Jim Cox. See what I mean about that green and maroon outfit?

But I must discuss the costumes, by Dana Rebecca Woods, a bit. They were perfect, for the most part. The chosen fashions didn’t seem to denote any particular era, which was good, because if I recall correctly, fashion in 1998 was just about the same as today. The girls, especially Angela, had to make several quick changes, and these outfits lent themselves easily to that situation. (So did her great, jealous-making hair!)

But my friend and I were laughing because there was one outfit worn by Angela that was just hideous, and it turned-out to be the only one repeated! Trust me, I was clubbing, and very into fashion, in 1998, and no one would have been caught dead in a kelly green wrap-dress with maroon-colored tights! I don’t think that anyone has worn that cringe-worthy combo ever, in 1998 or now! But all the other wardrobe was correct for the leads, and depicted exactly what the lesser characters were to the story. (But now I’m going to see green and maroon in my nightmares!)

Shallowness aside, the play did have one tiny, yet important, hole, though. The character Sara says something to the effect that every female has felt lesbianic tendencies at one point or another. I love my gal pals like one should love sisters. I think that Angelina Jolie is one of the most perfect people on earth. Meryl Streep is my idol. I’m grateful for them all. But I have never, ever been physically attracted to a female. Just to see if the playwright is correct, and I’m not the norm, I asked several of my female friends about it yesterday, because I had never considered this topic before seeing Stop Kiss, and to a girl, they all said the same thing that I did. So, no, not everyone has had those thoughts. Not that it’s a bad thing; it’s just not a correct premise.

The one thing I was missing from the script is that the writing doesn’t really explain why the two pals wind-up with crushes on each other. We see them from their first meeting, and it’s all very entertaining, but I didn’t see what it was that would make two straight women gay for each other. There was all fun, amusing repartee, but nothing that would indicate anything more than a fun time with a female pal. Maybe it would show-up more on film, where we can see their eyes leading to their souls. And experience their struggles up-close. 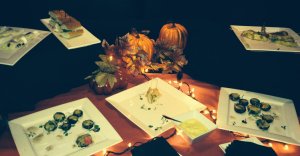 It looks like a lot of others beat me to the delicious food! (No worries, though–they constantly replenished.) And look at that pretty presentation! Photo by Karen Salkin.

One big point of interest to me is this: I don’t know how the play was originally written, but I found it refreshing to see how far theatre has come in casting in recent years. The ethnicities of the actresses is not an issue; anyone can play these roles. That also goes along with the Pasadena Playhouse’s on-going Diversity Program.

Now to the opening night soiree! It was the happiest after-party in a while. There was just a fun, congenial vibe, perhaps because the production was so good. 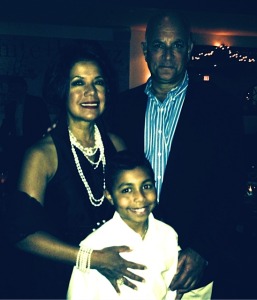 redwhite+bluezz owners Liz and Art Silveri with son Alexander, the most well-behaved person at the party! Photo by Karen Salkin.

The fete was held in the adjacent jazz club/eatery, redwhite + bluezz, and featured so many of my favorite foods. There were several dishes involving chicken, (which may be because they mentioned chicken in the show, but just for a second, so who knows if the chef actually picked-up on it,) and I loved the variety. It was in mini-sandwiches, as a salad-filling for endive leaves, and as the most flavorful chicken skewers I’ve ever had! There was also a buffet of meatballs and mac-n-cheese, and another table featuring other tidbits, such as spinach-and-cheese-filled mushrooms. (I’m making myself hungry!)

I swear, it was hard to tear myself away from this one, but I was anxious to get home and write this to share with you, so you don’t miss this worthwhile production. This is a short run for Stop Kiss, so I would get to the Pasadena Playhouse to see it, pronto.