Trending
You are at:Home»THEATRE»THEATRE: STONEFACE
By Karen Salkin on June 11, 2014 · THEATRE

The opening night of this play at the Pasadena Playhouse was a whole fun event. There was the show itself, celeb sightings, (including Jon Cryer, Taylor Hackford, and Patrick Duffy,) a halftime visit to the interesting little “museum” room off the courtyard, a generous food reception after, and…parting gifts! What a lovely night that I was happy to be a part of. 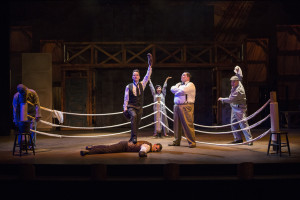 The cast of Stoneface. Photo by Jim Cox.

First, the show review. It’s a bit of the life story of Buster Keaton, about whom I knew next to nothing before this, (except that his famous hound dog facial expression reflects what I’ve been feeling for the past four years!) He has a most interesting history. Just don’t be late or you may be a little lost because the scenes jump back and forth between years. I had to avert my eyes early on for a minute, (because those moments were presented with strobe lights that make me dizzy,) when a screen was explaining the scene, so I got a little behind in knowing just what was going on. (By the way—don’t be late to a theatre ever, period. That’s just rude.) 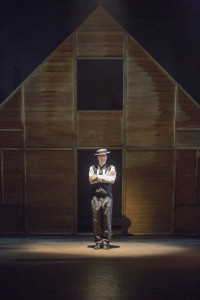 One of Buster Keaton’s iconic stunts. Photo by Jim Cox.

That being said, French Stewart does an admirable job as the title character. His physicality is excellent. I especially loved his Buster Keaton-esque hand movements. I was not familiar with his work before this, except for Love Stinks, a film Mr. X loves and made me watch once, (he starts chuckling just thinking of how funny French was in it,) so I went into Stoneface with no preconceived notions of his acting ability. But you could tell he was loving playing Keaton. (I sat a bit far back, which I’ve never done before at this theatre, and from that vantage point, he really did look like the silent film comedy icon, which added to the experience for me.)

There were several really entertaining physical bits, most notably on both sides of the intermission, so don’t be late back to your seat after it, either.

My guest and I absolutely loved that there was a live pianist, Ryan Johnson, who played throughout the evening, including as we entered the theatre! What a treat, and brilliant idea, that was! He added so much to the action, and made it feel somewhat authentic.

There was also a big screen suspended over the stage, upon which they announced what some of the scenes were, in the style of the silent movies Buster Keaton is famous for. Very clever.

My only real problem with the show was the structure of the script. My linear-thinking mind really needs a story told in order, and this one jumps around in years way too much for my taste. I had to come home and research the subject for hours to know exactly what I had just seen. Since you now know that going in, it may not bother you as much. Or just do the research before you go. 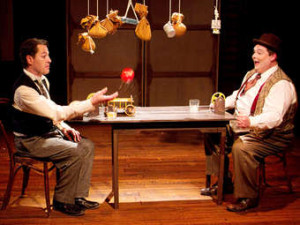 One of the funniest bits in the show, performed by French Stewart and Scott Leggett. Photo by Jim Cox.

The play featured an ensemble cast who each played several different characters, which is a always a good idea for shows such as this one. But they should have not had Scott Leggett, the guy who plays Fatty Arbuckle, playing anyone else because he was too recognizable as Arbuckle, so it was a tad confusing when we were supposed to realize that he was supposed to be someone else.

I’m ashamed to say that I’ve never seen a Buster Keaton film, so I appreciated this opportunity to learn about a comedy master. And enjoy a little bit different kind of stage experience.

When you go to the Playhouse, make sure to pay a visit to the adjacent Friendship Center, which always houses some pertinent exhibit to the show you’re seeing. This one featured a major prop that’s used in the opening of the second act, so I suggest you go after the show, to not spoil the surprise. Here’s a fun tip—you’re allowed to play with the prop yourself! It’s a trip. 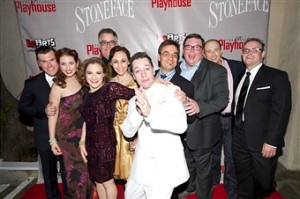 I was there on opening night, (even though it was opposite not only the Tonys, [which no theatre should ever do,] but also Miss USA and Game 2 of the exciting NBA Finals!,) and got treated to one of the best post-show soirées this theatre has ever put on! As usual, there was food from several different eateries, and it was all so creative. Most people loved the truffled mac and cheese from McCormick and Schmick’s, and Maison Akira’s duck pate, but I had eyes for only the pork meatballs from Pasadena newcomer Trattoria Neapolis, and the scrumptious chicken skewers served by redwhite+bluezz.

We all know that I don’t drink, but in my ongoing efforts to not leave anyone out, I stopped by the Angel City Brewery table. I’m so glad I did because the cute guys there gave me a blue tee shirt, (to “match” my eyes” they said,) and an interesting key chain can opener. I love a party with gifts! Then, as we finally exited, women handed us little packets containing different cosmetics. My friend got a shiny pink lipstick, and I received a good dark-hued eye shadow.

I have a feeling that Buster Keaton never had it this good.