Trending
You are at:Home»THEATRE»THEATRE: SOUTH PACIFIC
By Karen Salkin on December 13, 2018 · THEATRE

Even though I feel like I’ve seen the classic Rodgers and Hammerstein musical, South Pacific, a million times, I jumped at the chance to see it again at Ventura’s Rubicon Theatre last week-end. I hadn’t been to that venue in several years, and this was just the show to get me up there. 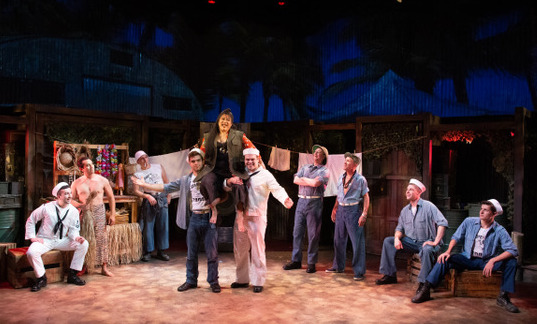 Photo by Jeanne Tanner, as is the one at the top of this page.

And theirs is a lovely production of it. It’s awesome to hear those beautiful, timeless songs sung live.

This is actually a big production for such a comparatively small stage, so kudos to them for making it work. There was a gigantic cast, too—twenty-eight in all!

But what makes it all feel not cramped, nor the stage ever too crowded, are the gorgeous projections around the entire top of the stage. The images of the beach, palm tress, birds, etc. really set the scenes perfectly, and give the whole presentation sort-of a movie feel. They’re impressive, as are the sets. Major kudos to Mike Billings, who designed them both.

And a quick shout-out to costume designer Pamela Shaw, as well. Outfitting so many bodies in vintage wardrobe could not have been an easy task. 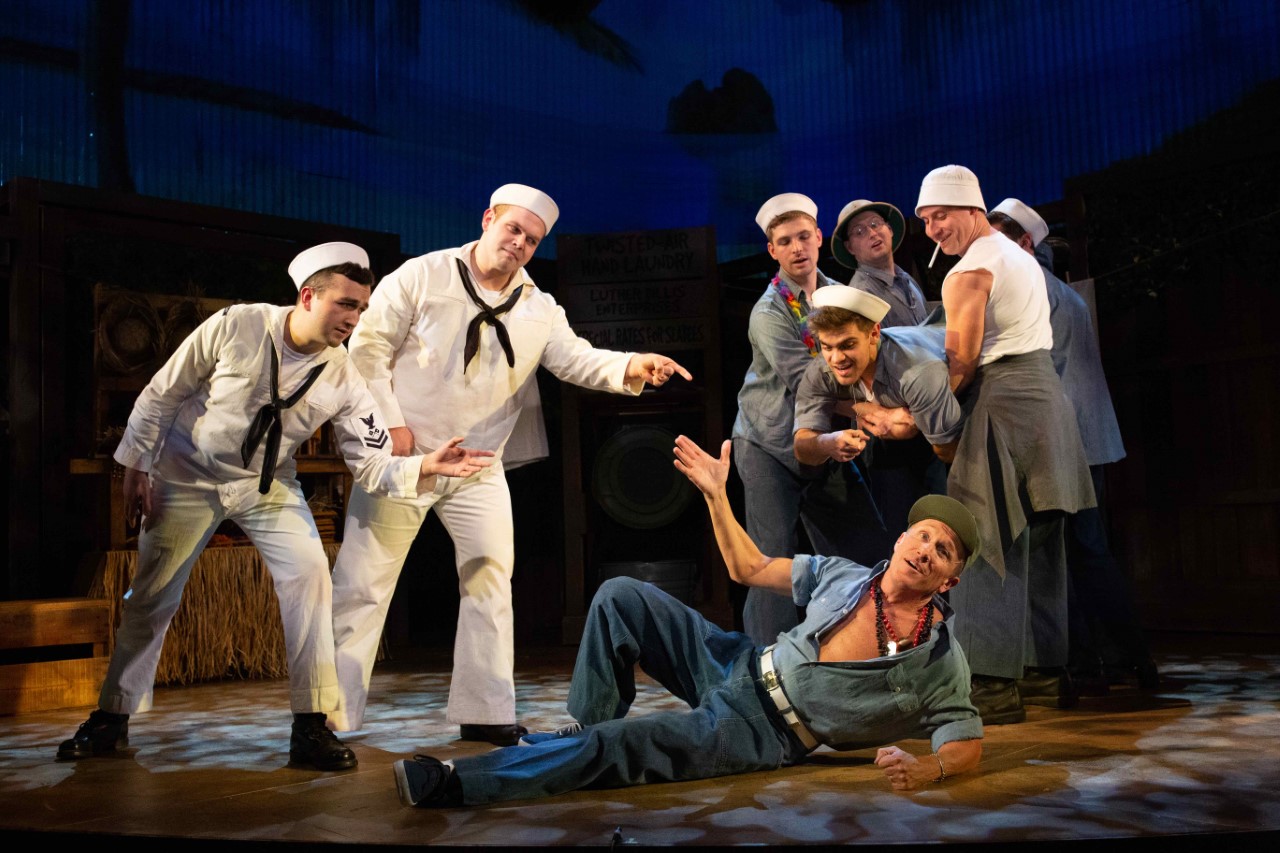 In case you don’t know, South Pacific is a Broadway hit dating back to the ’40s! It’s based on James A. Michener’s Tales of the South Pacific, and is set during World War II in—guess where?–the South Pacific, of course! There are two love stories, a colorful island woman wheeler-and-dealer, and lots of Navy men antics. There’s both comedy and drama, the latter of which I could not wrap my head around when I first saw this show as a little girl. (More on that aspect in a minute.)

As much as I’m still not a fan of the dramatic bits, the comedy is fun, and I care mainly about the music. (I’ve seen South Pacific so much that I already knew every lyric when I was a very young girl. How strange is that??? And I can still go through them all with missing nary a word, even “bromidic,” which I still puzzle over.) 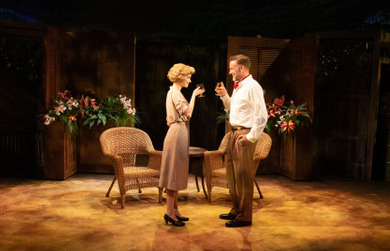 And the Rubicon does it all with just two pianos playing the entire score! Granted, that does make some of the numbers sound a bit tinny, but overall, the songs and some of the voices are so powerful that it doesn’t matter at all; it’s really quite the accomplishment. I didn’t even miss the rest of the orchestra! (But I do wish the pianists had come out for a deserved round of applause during the curtain call.)

The best voice, by far, belongs to Ben Davis, who presents lead character Emile de Becque as quite the attractive older man. The theatre is very lucky to have gotten him for the role. His powerful rendition of This Nearly Was Mine was my favorite song of the evening. (And, interestingly, he guest-starred on that week’s Blue Bloods, which I watched a few days later. I recognized him right away, even without the gray stubble of “Emile!”)

But the rest of the opening night audience went nuts for the comedic cross-dressing number, Honey Bun, which is always one of the highlights of this musical, in general. (The photo at the top of this page is of that song.) 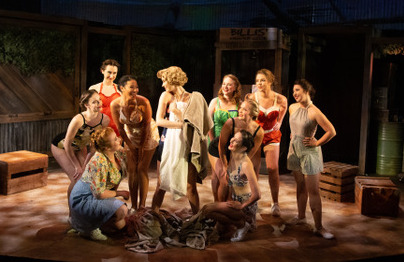 Notice how far back the shower is in this scene. Photo by Jeanne Tanner.

On the flip side of the musical numbers, I feel that a bit more could be made of the hair-washing in I’m Gonna Wash That Man. (The rest of that lyric is “…outta my hair.” The title alone sounds like she’s going to wash an actual man’s body!) The character really does wet and shampoo her wig right on-stage, which is usually a highlight of the show, and I had been wondering how this under-two-hundred-seat theatre was going to do that. But do that they did! The only problem is that the “shower” is sort-of in the background, behind the dancing girls, so the effect of washing her hair right in front of our eyes is sort-of lost, unless one is looking for it specifically. 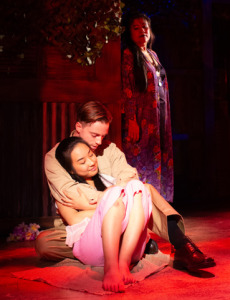 There’s one aspect of this story that took me by surprise, (although it should not have. I’ll explain in the next paragraph.) Both love stories involve racism, which I thought I had never noticed in all the times I had seen this show and film. I went home wondering how I had missed it for all those years. I came to the conclusion that it was probably because, as one of the show’s songs explained, You’ve Got To Be Carefully Taught, (meaning—to think like that,) and thank goodness, my parents never taught me bigotry. Quite the opposite, actually, which are stories for other times.

But then, as I was writing this review, and doing research for it, (even though a lot of South Pacific background is very handily right in the program,) I began to think that I had seen the musical much more recently than when I was a youngster.  So, I looked over my INAM archives and discovered that I had seen it just eight years ago! When I read my review of that production, I found-out that I was shocked by the racism angle back then, too.  I realized that I’ve been blocking it out all this time!  I have one of those great memories, so how disturbing to me is that part of story for me to have continually blocked it from my mind, and as recently as in the last decade?!

No worries, though, because it all works-out in South Pacific, perhaps way too easily, but, as my father used to tell me about disconcerting entertainments, this is just a story, folks, so just go with it. I’m not warning you about it; I just felt the need to discuss. 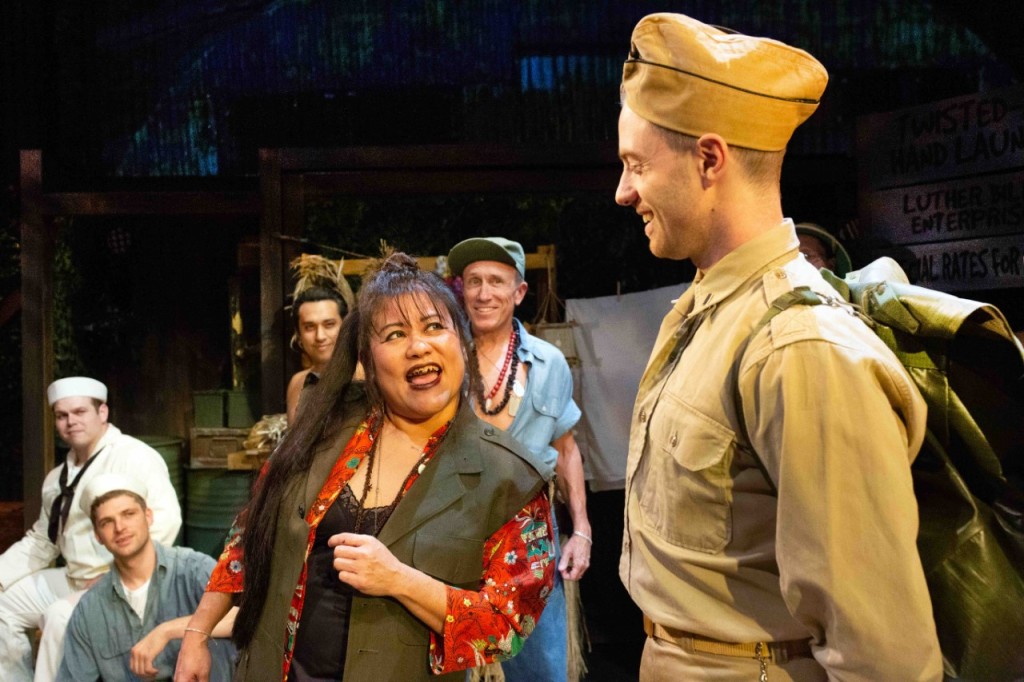 Some words about the Rubicon Theatre: This is a wonderful opportunity afforded to the community, to have such a well-respected and caring not-for-profit regional theatre company right in their own backyard, who put on shows like this one.

Also, one very nice thing that they do is to not start the performance until the rest rooms are clear. (I know that for a fact because I was the last one in there that night, and they waited for me!) 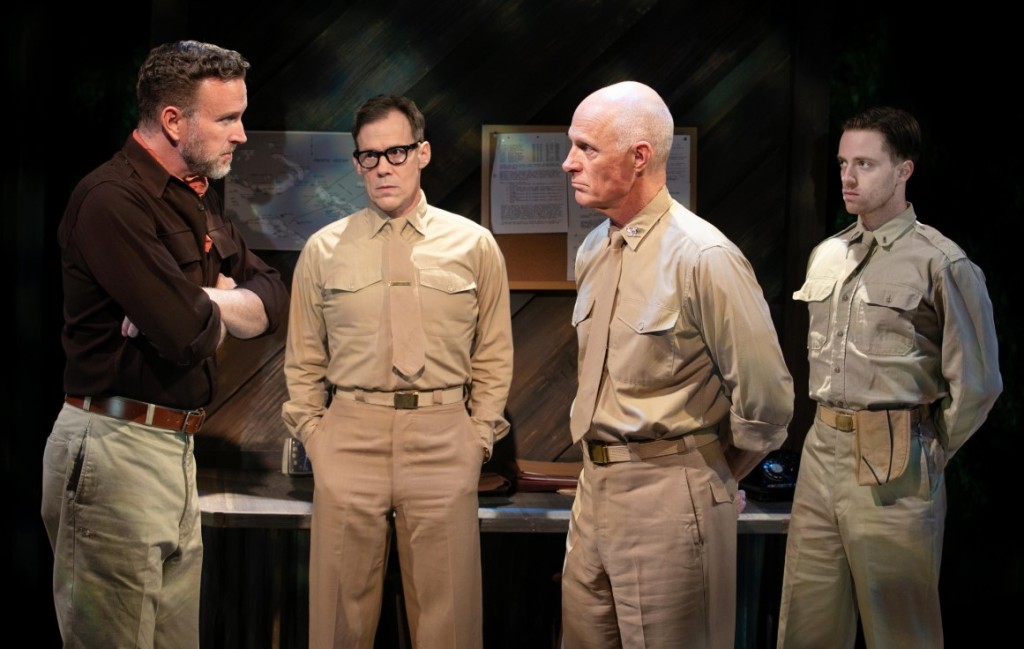 But speaking of the restrooms, I have to let you know that there is no easy access to them. They’re down several stairs and at the far end of a long hall, so just be aware of that, in case you’re ambulatorily-challenged.  And maybe wear Depends when you see this show, because the first act alone is an hour and a half!!! Just sayin’. (But, I swear, that act doesn’t seem that long. I was shocked when I looked at my watch at intermission!)

Also, if you’re short, opt to sit up-close because the slope of the seating in the auditorium of this venerable theatre is almost non-existent. Or bring a booster seat! (At least the stage is very raised.)

But no matter where you sit, how you get there, or which performance of the show you see, if you’re a fan of classic musicals, you should not miss the Rubicon’s South Pacific! But hurry—the run ends in just ten days!