Trending
You are at:Home»THEATRE»THEATRE: SEPARATE BEDS
By Karen Salkin on May 25, 2016 · THEATRE

As usual, Theater 40 in Beverly Hills brings us another entertaining show. This time it’s a four character (played by just two people) comedy. Separate Beds is the story of two very different couples who meet on a cruise. The author, M. J. Cruise, (I just realized—her last name is the same as the setting of the play!,) is Canadian, so I was a fan before it even began. (Mr. X and I adore Canada!) 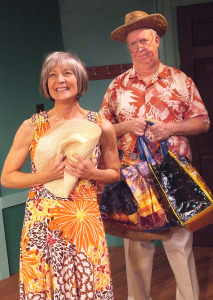 The show is very enjoyable, with lots of laughs. Since the krump-dancing-yet-otherwise-reclusive Mr. X, and social butterfly moi, have never adhered to what’s considered normal for people in a relationship, the goings-on were mostly new to me. But I have a feeling that many long-married couples will identify with at least a few of the scenarios. (The only one Mr. X and I have been through is trying to avoid other people when we’re out in public!  Unless we’re in pleasant-peopled Canada, of course!)

Since this comedy features only two actors, I must, for once, critique the entire cast.

I rarely go nuts over an actress, as I’m sure many of you know.  So trust me when I tell you how impressed I am with Mona Lee Wylde. Not only is she an excellent actress, she’s a beautiful woman, with fabulous arms.  I knew within a few minutes that she was also a dancer.  I don’t think I’ve ever seen a better body on a grown-up woman.  (Or on most younger ones, for that matter!) You go, girl!

She portrays her two characters in this show so differently from each other, it’s almost scary, (in a good way, of course.) If I hadn’t read my program, I never would have guessed that it was the same actress in both roles. Major kudos to her for that! (When I saw Mona at the after-party, I realized that I had met her for an instant at the previous opening night fete.  Even then, I perceived her to be perhaps the classiest woman I had ever met.  She absolutely radiates beauty in a way that reminds me a bit of Greer Garson.) 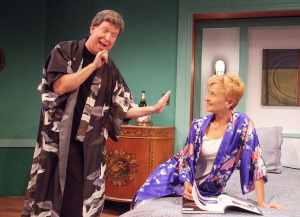 On the other hand, (and I hate saying this,) the male, Daniel Leslie, was miscast as the second husband.  I realize that one man has to play both parts, so perhaps they should have gone with an actor who could portray two such different men, without the latter one coming off like simply the first guy with a wig on. Leslie’s performance really did nothing to distinguish between the two. He was fine as the first act schlemiel, and provided many yuks doing so.  But his second guy was a pretty weak characterization. I think that he would be fun in commercials, and a shoe-in for voice-overs because his voice is a wonderful deep baritone, but he was just out of his league playing a character that was so different from himself.

I agree with my friend who came with me to opening night that Separate Beds needs to be a tad shorter, especially the first act. But hang in there when you see it because it’s a fun ride, which pays off in the end.

In addition to the length, there was also one small thing about time that bothered us a tad. Either the years mentioned should have been changed to accommodate the cast, or younger actors should have been cast to accommodate the timeline. The first couple keeps talking about the fact that this is their thirtieth wedding anniversary, which would be believable if they had gotten married later in life, as so many people do. But they also mention that they’ve been together since the woman was seventeen. That would have required actors who are many years younger, so that discrepancy was a bit distracting. (By the way—I’m not saying there’s anything wrong with being older. I’m just pointing-out that it’s confusing for an audience when a play doesn’t have the ages right. Any play. In this case, my friend and I lost several minutes of the narrative trying to figure it all out.)

But back to the many positives of this show. Mona Lee Wylde playing two such different woman with such complete-ness provides definite proof of my theory that hair and clothing choices really show what’s on one’s insides. I often want to give make-overs to females I meet, and then I realize that what they’re choosing to look like is a definite reflection of their inner beings. If they choose to look like nerds, who am I to stop them from doing so? Then they’d look like my interior, not their own. 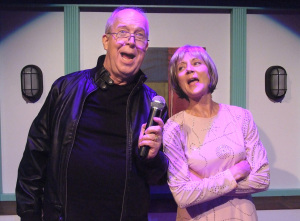 Adding on to the positives of the story itself, and Mona, we also very much appreciated the entertaining music choices, especially the ones during the semi-lengthy-but-necessary set changes. I heard several audience members singing along with those classic tunes. Good music always puts some extra verve into an evening.

As Separate Beds was going on, and with both acts featuring just one of the couples, I did begin to wonder where it was all heading.  But it actually has a very satisfying ending, which is just the way I like my shows to be.  And as simple as the wrap-up is, even my detective mind did not predict what it would be. Which made it all the more special.