Trending
You are at:Home»THEATRE»THEATRE: SEMINAR
By Karen Salkin on October 19, 2012 · THEATRE

For many years, I’ve had a personal soft spot for Jeff Goldblum, the star of this show. So, before I review Seminar, which just opened at the Ahmanson Theatre, I have to share the story of why that is.

When I was first doing my show, Karen’s Restaurant Revue, and was not yet the darling of the local glitterati, I was at a private industry screening. I was awed by all the star power in the room! 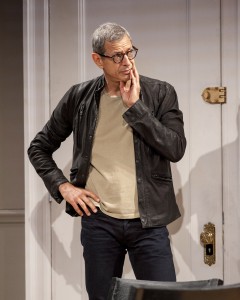 Before it started, I felt a firm grip on my shoulder, and turned around to come face-to-face with…Jeff Goldblum! To me, he always looks kind-of serious, (which makes him even funnier in comedies, like Glee,) and I immediately assumed I had done something wrong, or that he was going to ask me to move my head, or something like that.

Instead, he inquired, “Are you that girl on TV?” I felt obliged to confess that yes, I was, even though I expected him to say something bad about my show, because of the above-mentioned expression on his face. Instead, he did his patented deadpan look, with one of his big hands on his chin, and said, “Oh, you’re wonderful, you’re wonderful.” I almost fainted.

I loved that story, and always wished I had been brave enough to take acting classes that he taught at that time. But years went on, and surprisingly for us show biz folk, we didn’t run into each other again for a long while.

Several years later, (and ago, now) my posse of Lila, Mimi, Hannah, and I were en route to see Jeff’s jazz band perform at a Hollywood club, (he’s a man of many talents,) because he and aspiring singer Hannah shared a drummer. On the way, I told the girls the story of having met him years previous; they were a tad impressed.

So, we got to the club before his set, and right in front of the girls, Jeff walked up to me and said hi. While I was gathering my courage to ask if he recalled our previous meeting, he said, “We’ve met before; do you remember?” I was shocked, but must have looked perplexed. Thinking my look said, “No, I don’t,” he told me the same story I had just relayed to my friends! And he did it word-for-word, exactly how I did! My mouth was hanging open!  So, I think he thought I had forgotten, when I was really just amazed that he remembered the whole thing! But even better than that he and I were on the same wave-length is that it totally impressed the girls, a feat I had rarely accomplished. I always remember Hannah, the hardest one to impress, telling others, “Jeff Goldblum loves Karen!” Not exactly, but it made me a big deal in their eyes for a little while. So, I’m always grateful to Jeff for that.

So now it’s October 2012, and I had planned on spending the entire month in New York. It may be my last Fall there ever, a fact that’s making me beyond sad. (Yet another story for another time.) But, the second I heard that Jeff was starring in Seminar at the Ahmanson Theatre, I changed my plans. I had to return the fan favor.

As much as I love sharing that story, I now have to face the daunting task of reviewing this awful play and production. (The awfulness is no fault of Jeff’s, I’m relieved to report.) It’s supposed to be a comedy, but I swear, I never even came close to laughing, not even once. My mouth did go into a half-smile for a brief second, more than halfway in. But that was it.

And I wasn’t the only one. Though there were plenty of people laughing during the opening night performance, I felt it was really thin for this venue. (Perhaps it would have gone over better at the smaller, more intimate Mark Taper Forum.) What made the dearth of mirth more obvious to me was that I had just participated in the rollicking laughter at the neighboring show November, (which is at the Taper,) so I knew what that sounded, and felt, like.

Not many audience members seated around me laughed either. A man exiting behind me summed it up best when he told his pal, “I just wasted an hour and a half of my life.” I hear you, bro. [Note: I can’t tell you how many emails I got from fellow audience members who spied me from afar, expressing the disappointment they’ll feel if I don’t do the right thing and tell you all how not good the play really is. (Only most of them used language I can’t print.) They’ll be pleased to see that that’s exactly what I’m going to do right now.] 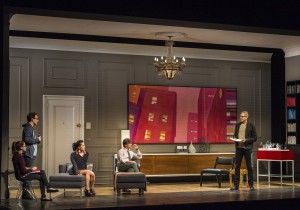 Let me try to explain why none of it worked, in my opinion. First of all, the material was weak. It had an occasional good line, but nothing had bite. I seriously didn’t even know what was going on half the time. And I’m a writer!!! (A writing professor giving a private seminar is the premise of the play. And the guy kept reading his students’ long stories in about two seconds! I know a play isn’t real life, but come on, give us a break with that kind of credibility stretch!)

Then, I’m sad to say, the direction is another big problem. It was pointed out to me when I was just a young actress that delivering one sentence at a time, pausing after each one, especially with no overlap from your cast-mates, is death in the theatre. I could have delivered my own rapid-fire monologue in some of those pauses!!!

The worst, though, was the cast, outside of star Jeff Goldblum. He’s perfect for stage work, (and I’m not just saying that because he was one of my first fans. The feeling is mutual.) His great body and posture don’t quite come across on film, but on stage, he cuts an impressive figure. His use of his gorgeous hands is also commendable, and his booming voice made him the only one many of could listen to. So, none of the fault is his.

But, oh, the rest of that two guys and two girls cast. In all of Los Angeles, where there are actors at every turn, these are the four they came up with??? It’s inconceivable. (One guy, Lucas Near-Verbrugge, was okay, but was sidelined with his character being all but forgotten at least halfway through, after a promising start.) Two of them, Aya Cash and Greg Keller, had a couple of the worst voices ever. She sounded like a Saturday Night Live character, with a voice that was nasal to the nth degree, and we could barely hear him, (not that we wanted to with that low rasp.)

And, despite all the sex different twosomes of them were having, there was zero chemistry among any of the lot of them! The whole production was like scenes from an acting class. A beginning one at that. (On the way out, a respected person in the biz said just about the very same words to me.) 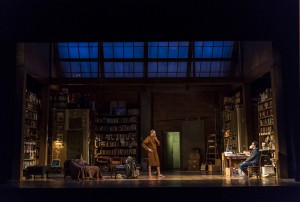 The great set for the last scene.

The set was nice enough, and got better towards the end. (A surprise in that category didn’t even elicit any form of acknowledgement from the crowd.) And the many quick costume changes by everyone other than the professor provided a few moments of interest. But that was it. (Other reviewers, who are looking for some deeper meaning from this show, might surmise that the professor’s constant dark, leathered outfit, contrasted with the students’ colorful, ever-changing wardrobe, was designed that way to play-up his pretentiousness, or some such theory. But I review as an everyman, who just wants to be entertained. And wasn’t, in this case.)

Needless to say, this whole production was a major disappointment. At the start of the show, I was annoyed that so many people around me were unwrapping loud candy. (What is up with that, anyway? No one eats that stuff, unless they’re in a quiet theatre. Sitting next to me, to boot!) But pretty soon, I was welcoming the distraction.

Towards the end of the show, one of the characters tell another, “I don’t know what you’re talking about!” That pretty much sums up how many of us felt about the play itself.

[Note: if you were planning to go to the theatre in the next month, but now don’t know what to do, I highly recommend seeing November at the adjoining Mark Taper Forum instead of this one. If you missed it, you can read my glowing review here: www.itsnotaboutme.tv/news/2012/10/09/theatre-november.]