Trending
You are at:Home»THEATRE»THEATRE: PUMP BOYS AND DINETTES
By Karen Salkin on June 27, 2018 · THEATRE

What a fun show this is!!! There’s no pain, no thinking, no sadness. Just music, music, and more music.

Actually, Pump Boys and Dinettes is an all-country-music show. I had no idea. I had heard of it before, but, since Sierra Madre Playhouse (SMP) is the first LA company to ever produce this musical, I’ve never seen it. 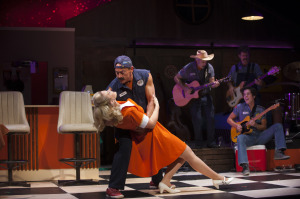 Before the show began, when I first noticed the drums on the set, I thought it was cute to have the musicians right on stage, as they were for Always…Patsy Cline, the first show I had ever seen at this adorable theatre. But, a few minutes into it, I realized that the band members…are the Pump Boys!

There’s not much story here; the show is basically a country music fest strung together with a modicum of narrative, but that’s okay. The five* Pump Boys from the garage interact with the Dinettes, who are the two waitresses from the on-premises diner on Highway 57 in North Carolina. [Note #1: I did not know that the setting is that state until a few days after I had seen it, yet one of the first notes I wrote that night is that, instead of this theatre making me feel like I’m in Bucks County, Pennsylvania, in the summer, as it usually does, (which I adore,) this time I felt like I was in North Carolina! So I guess the atmosphere they created is a success!] [Note #2: The program also states that the show takes place in 1972, but, in that neck of the woods, it really could be right now! Ouch.] *[Note #3: Actually, only four guys are part of the action–the drummer doesn’t do anything other than drum.] 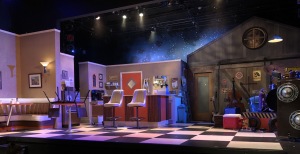 I absolutely loved the set! It sets the perfect mood the second you enter the theatre. (But, of course it’s excellent—it’s designed by Jeff Rack, whose work I always laud in other LA venues. I didn’t realized he did this one until…the above-mentioned few days later, when I finally had a second, after my very long, very busy week-end, to finally read the program!) I wanted to jump up there, sit in the diner booth, and order something myself. (And you can actually do just that when you see the show! Here are the deets: A new feature of SMP is that you can now choose your seats ahead of time, when you purchase them. And that’s even more special with this production because, for just a few dollars more, you can opt to sit in that booth…on the stage! And you even get served pie up there!!! I believe coffee’s included, too.)

As for the tunes in Pump Boys and Dinettes, it’s a privilege to hear such excellent live music in such an intimate space. The five-man band is made up of all accomplished musicians, and the entire cast sings well enough, some better than others. In group numbers, their voices blend beautifully. It’s obvious that the best voice belongs to Cori Cable Kidder, who starred here before as Patsy Cline in that first show I saw at SMP. She has the perfect country music chops. 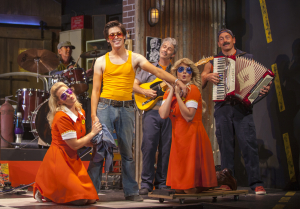 The seven of them are attractive, as well, especially the lone young ’un, Jimmy Villaflor. Singing does not appear to be his forte, but he does sell his sort-of solo number, Farmer Tan; it’s a riot.

The occasional dancing, though, left a lot to be desired. But it provides a bit of variety in an otherwise just-singing show, so I was glad to see it.

There are a couple of cute “bits” that involve the audience. I don’t want to ruin the surprises for you, but pay attention. I will give you this one clue, though: when I opened my program, I thought they were bribing me for a good review because it looked like there was a dollar in there. But then I found-out there’s one in everyone’s program for use in one of the most fun songs. 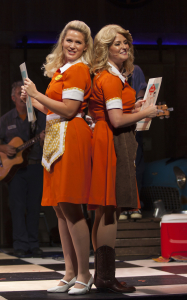 At the end of the first half, the friend who was with me that night said, “ It’s charming.” And then it seemed like there was even more work put into the second half. They definitely upped the energy quotient as the show went on, which is a welcome change from the norm.

And if you’re a nice audience, you’ll get an encore of a medley of highlights of what came before. On opening night, everyone left wearing a smile and in a great mood, which is exactly what I like to see on an evening in the theatre.

Now, here are some tidbits about Sierra Madre Playhouse, in general, that you might want to know. First of all, they have a “Digging Deeper” program, which means that they present interesting auxiliary events around each show. And most are free! Check for them on the website below. Also, I suggest you dress in layers when you visit because it’s usually either roasting or freezing in there. And sometimes both! 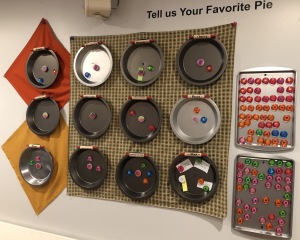 My favorite aspect of that venue is that they always have the most interesting lobby displays of anyplace I’ve ever seen! And it all pertains to the show that’s playing. Often they feature a brief written-and-pictorial history of the show, as there is with this one, and sometimes a game or two. One of the items this time is a survey to find-out which flavor of pie is the most popular among each audience. The guests are encouraged to place colorful magnets into the pan labeled with their favorite. There’s even a pan for write-in votes, (some of which were a tad unusual that night.) SMP thinks of everything!!!

And I’m glad they thought of bringing us this show! Pump Boys and Dinettes made me crave pie and want to fill up my car afterwards, and the adorable town of Sierra Madre Playhouse is the perfect place for all of it!