Trending
You are at:Home»THEATRE»THEATRE: PRISCILLA, QUEEN OF THE DESERT
By Karen Salkin on May 31, 2013 · THEATRE

PRISCILLA, QUEEN OF THE DESERT

I came back to LA just to see this show! I’m not kidding; I made my New York trip dates around this fun musical. And let me tell you how happy I am that I did!

Being a major fan of color and sparkle, Priscilla, Queen of the Desert, was indeed the show for me. I was never really into ’70s music, though, which the songs mainly were, but when I spent recent summers in Aspen up until a few years ago, my best pals loved going to clubs on “’70s Night,” and I got into the fun with them. So, this show brought back great memories of those summers, as well.

There’s nothing much negative to say about Priscilla, except for one very unnecessary opera lip-syncing number. And, for those of you who grew-up in New York, it did really seem a bit like a gay Sing, the thought of which made me smile in the middle of the first act. But it was all good. 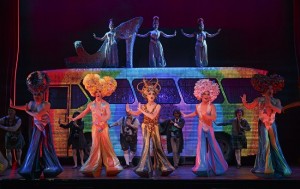 As excellent as all the singing and dancing was, the costumes were the stars of the show. OMG! How did anyone come up with these??? (Perhaps they watched my show in the ’80s, with all my crazy get-ups.) The combination of colors and sequins, etc. is everything I love! Multiple award-winner costume designers, Tim Chappel and Lizzy Gardner, are people I want to hang-out with! I can’t laud their visions enough.

You can’t separate the costumes from the rest of the show; everything really works in concert—the wardrobe, set glitz, performances, story, songs, dancing, and downright craziness. And of course, Priscilla herself! (It’s the bus, which most of you already know, I’m sure.) The entire spectacle is one I’ve rarely witnessed elsewhere.

Of course, the musical is based on the 1994 Australian film, The Adventures of Priscilla, Queen of the Desert. I can’t believe it myself, (especially because I used the name Priscilla all the time in high school, when I didn’t want to give guys my real name,) but I never saw the movie! I’m not an idiot, so I knew it had something to do with drag queens crossing the Australian desert, but that was it. So, not only the surprises in the show, but the story itself, was new to me. Often, I regret not reading up on the action before I see a show, but this one is mostly self-explanatory all the way. I love an easy narrative. (Although it wasn’t quite clear if the older “showgirl” was actually a transsexual or just a transvestite because I heard the latter word, but they did talk about his private parts being removed. It didn’t really make much difference, though.)

Every song and musical number is an already-famous one, mainly dance ditties, (such as I Will Survive, Girls Just Want To Have Fun, and Material Girl,) with an occasional classic, (A Fine Romance) thrown in for good measure. Most of the dance numbers are basic movement, (because how crazy can moves get in hundred-pound* costumes!?,) but Pop Music, in the second act, is a gem. Maybe not choreography-wise, but cleverness-wise. Chelsea Zeno brings down the house in that one. Hearty guffaws were heard all around. *[I’m sure I’m exaggerating a bit about the wardrobe weight, but they just can’t have been too light.] 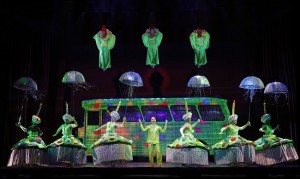 Now, I must give kudos to the three lead guys, Wade McCollum, Bryan West, and Scott Willis. They each brought such a different character to life, which made it especially fun to watch. Wade’s movements were so liquid in the super-campy MacArthur Park number, (a song I usually loathe,) that I was sure he was primarily a ballet dancer; but I checked all around to see if I was correct, and I didn’t see any dance credits for him! Wow.

Scott’s posture was so gorgeous that I totally believed he was an old dance “woman.” And Bryan was so full of genuine happiness that I want to be friends with him!

Even the members of the ensemble seemed happier than most others I’ve seen. Priscilla seems like it would be the most fun production to be a part of, in any capacity!

There was one opening night audience shocker for me—no one I could see in the audience was moving to the music the entire time! I couldn’t help but pulse it out, broken back and all, so how did not one other person, many in show biz themselves, feel the need to move?! Even some dancers and choreographers I spied sat still! I don’t know how that was even possible. So, when you go to the Pantages, please feel free to move in your seat, within reason.

A digression for a little story, (but it pertains to this experience): Mr. X and I used to go to a private screening in Beverly Hills every Sunday. When we had finished seeing Toy Story 2, he stopped our exit, and told me to look around. Everyone was upbeat and chatting and smiling. He told me to contrast it with the way the assemblage usually was when the movie ended, which was just miserable because so many movies are heavy and depressing nowadays, in an effort to get awards, rather than really entertain the general public.

I tell you this because I had to make the hard decision on opening night this week between Priscilla and a newer musical elsewhere, one that’s nominated for multiple Tonys this season. As much as I really wanted to see that one before next week-end’s award show, I knew the topic was a downer. I had asked a wise friend of my mother’s in New York, who sees every show there is, which invitation I should accept. And she said, “For you? Definitely Priscilla! You like happy, and not being depressed.” 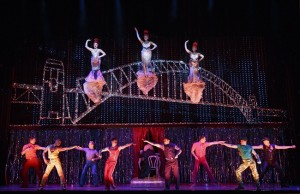 And boy, was she correct!!! Rarely do I give props to my own decisions, but at the end of Priscilla, when the entire audience was on its feet, going wild, I was applauding my theatre choice, as well. (In truth, I had accepted this one first, and feel it wouldn’t be fair to change, but, just because I like all the people involved in both theatres, I did pause and consider my options for a minute.)

So, here’s the lesson to you, my good readers: if you get a chance to do just one fun, creative, cultural thing for yourself in the next three weeks, Priscilla, Queen of the Desert, at Hollywood’s Pantages Theatre, should be your choice, as well. And, if you don’t have turquoise sequined sneakers to wear there, like I did, just bring your feathered boas, dah-lings!