Trending
You are at:Home»THEATRE»THEATRE: PORTRAITS OF HUMANITY: A SERIES OF SOLO SHOWS—PAUL DOOLEY’S MOVIE DAD
By Karen Salkin on July 25, 2017 · THEATRE

Let me tell you right up front that I usually eschew one-person shows. I just don’t have the patience for the more-often-than-not self-indulgent pieces. 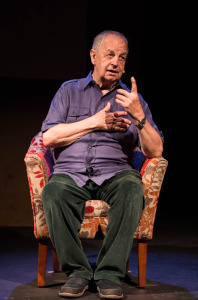 Paul Dooley. Photo by Fiona Lakeland, as is the big one at the top of the page, of Paul with his hero, Buster Keaton, behind him.

So, when I tell how worthwhile I think this series of “solo shows” at Theatre West in the Valley is, you know how serious I am about it!

The series started off with a bang with Movie Dad by character actor Paul Dooley. I have to tell you that, although he would not remember me, I did used to know him a tiny bit when I was starting out in the biz. We were both part of Robert Altman’s world, though Paul’s connection with the famous director was much stronger than mine, thank goodness. (I’ll tell my story of that strange time in my life sometime when I do my own show, but do not hold your breath for that one.) So, this presentation was very interesting to me. There’s so much more to Paul than I could have ever imagined! And it’s all good!!!

This is perhaps the only time in my life that I really wanted to see a one-person show. That desire was mostly because I was curious to compare Paul’s experience of the Altman days to mine. But one minute into the show, I forgot all about that aspect.  I got so engrossed in his performance that I just wanted to enjoy everything he was saying at each moment. He was totally engaging and charming. I was pretty shocked to discover that an eighty-nine-year-old can be so captivating, and not at all in a “senior” way. 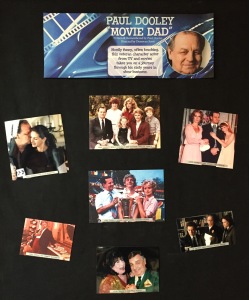 Images from some of Paul Dooley’s many roles. Photo by Karen Salkin.

Paul shared the highs and lows of both his career and personal life. When he began with his childhood, my first thought was, “Oh boy, this will be a looong hour and a half!” But I got right into his monologue. It was all pretty fascinating.

Before I tell you more about this show in specific, I have to let you know that, sadly, his time at Theatre West is up. (But if you ever have the opportunity to see him do this show anywhere, even in his living room, I highly recommend doing so.) In the meantime, there’s a whole series of these solo shows at Theatre West; all the info is on their website at the bottom of this review. If the others are as successful as Paul’s was, we’re all in for more treats! 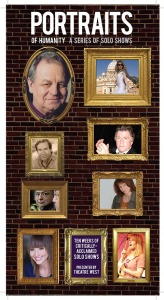 The line-up of the series of upcoming solo shows at Theatre West.

Actually, his show brings up several reasons to support theatrical programs like these. The personal presentations are living proof of the internet memes that tell us that everyone has pain, even when we can’t see it. We really do not know what’s in someone else’s life, and what their journey really is, unless they share it with us. For example, as I said, Paul and I were in the same big group of people way back in the day, but I was just a kid, and, as we know by his age, he was just another grown-up man slightly in my periphery. I doubt if we ever said another word outside of the obligatory “hi” a few times. I hung-out with my fellow young ’uns in those days, and had zero interest in knowing anything about him back then.

But, had I taken the time to grill him, as I do with everyone I meet now, I would have had so much respect for the man! And this Portraits of Humanity series is giving us all the opportunity to do just that, without having to come up with the questions ourselves. I really love knowing someone’s whole story, and journey, so this is perfect viewing for others with my same curiosity. 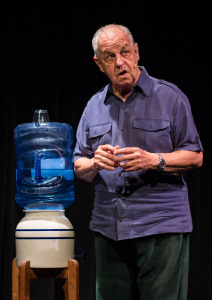 So, back to Paul Dooley’s Movie Dad show in specific. I didn’t even realize that he’s played a ton of fathers in films! (Oh wait—for alliteration sake, he should change the title to Film Fathers! You heard it here first, folks. Get it? Alliteration.) I had absolutely no idea that Paul was so humorous. Or even at all! But his comic timing is impeccable. Not only did he tell us his personal stories, but he threw in several jokes, which he moved over to a water cooler to tell us. Clever touch.

There were also many projections, including his historical stills, several clips of old footage of him, and even cartoons he drew!!! Who knew the man was so prolific??? Certainly not I!

What a fun night of theatre this was! And there are seven more solo shows to see at Theatre West over the next month and a half. A few people I know have seen previews of a couple of them, which led them to highly recommend the entire series to me. So, let’s hope they keep Paul Dooley’s ball rolling, and I hope to see you all there!