Trending
You are at:Home»THEATRE»THEATRE: OTHER DESERT CITIES
By Karen Salkin on December 11, 2012 · THEATRE

No matter what else I have to say about this play at the Mark Taper Forum, (which was recently on Broadway,) seeing Jeannie Berlin act in-person is a master class for actors. I wish she could have done all the parts! 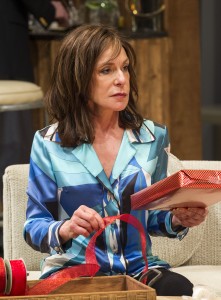 I had the good fortune of being in her group at the opening night party, and spending quite a bit of time chatting one-on-one with her there. I was shocked when she told me that she works on her characters; she’s so natural! I thought these words just pour out of her mouth with no work necessary!!! That’s how good she is—she fooled me!

But first, to the production of Other Desert Cities. Unlike most other reviewers, I try not to read up on shows before I see them because I want to always experience them as they happen, with no pre-conceived notions, when at all possible. So, with the world being what is is nowadays, I saw the word “desert” and immediately assumed it was a play about the war! With that in mind, when I saw the gorgeous set, designed by Takeshi Kata as a perfect upscale Palm Springs abode at Christmastime, I felt a sigh of relief. After a month in New York, I really just needed some visual prettiness. [FYI: the title actually cleverly refers to areas around Palm Springs.] 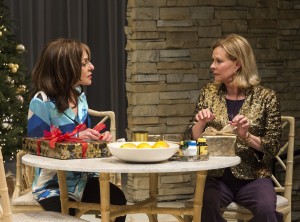 I must tell you that the rest of the opening night audience seemed to love this whole production. It wasn’t my cup of tea, but perhaps that’s because I’ve been dealing too much with my own dysfunctional family this year, so that topic is more painful than humorous to me.

But, to see Jeannie Berlin in action was a privilege!!! I’ve been a fan since the first time I saw her brilliant performance in the original, (and only, in my opinion,) The Heartbreak Kid. It was a revelation! (Perhaps that’s where my aversion to e-words originated. I still cringe every time I see e-word salad sandwiches on a menu. If you’ve seen the film, you know what I mean.) 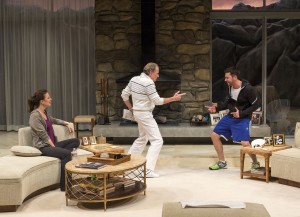 All five performances in Other Desert Cities were good enough, and portrayed all we needed to know about the characters. JoBeth Williams as the matriarch looked better than she ever has, and was a nice surprise, since I’ve never been a fan or hers in general. I feel bad saying this, but the sort-of manly voice of Robin Weigart, in the pivotal role of the writer daughter, was hard for me to listen to. I’m sure that other critics loved her, but my ears winced every time she spoke, so it was hard for me to judge what she was doing with her part.

I’m not sure exactly what the message of the play is, (I’d guess everyone else is, though,) but the action is that of a family in pain, trying to push it under the rug. Let’s just say that they’re having almost as awful a Christmas as my family did last year, which was the most horrible time imaginable. I’m sure I’ll relive a tad of it this year in this e-zine, so that you all will remember to appreciate your own lives. Which, I have a feeling, is sort-of what this play does for its audience members.

As painful as it turns out to be in the second act, the whole action is full of yuks, mainly every time Jeannie Berlin utters a line. She’s an amazingly simple line-deliverer, sort-of in the vein that Bea Arthur was. As an actress, it’s the gift you wish you had. (I know I certainly do!) You could just feel the audience lift-up with Ms. Berlin’s much-needed entrance.

As interesting as most found it to be, I felt the production was too long, especially the first act that was almost an hour and a half. It seemed that each sentence the actors spoke was enunciated exactly, with too many pauses where the periods are written. And there were also too many mini-monologues, even though I semi saw the need for them.

But, to witness Jeannie Berlin, and the beautiful set and lighting, (that were designed so perfectly I actually thought I saw the sky moving, though it really wasn’t,) is worth the time spent.

I rarely do this, but I have to give shout-outs to lighting designer Lap Chi Chu and costume designer Alex Jaeger, the latter of whom totally captured the essence of each character.

And I must also laud the knowledgeable LA audience for laughing the heartiest at all the anti-Republican jokes. 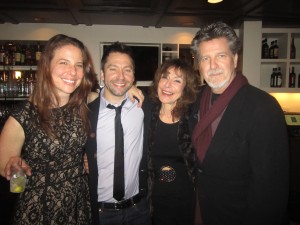 So, the show was finally over and it was on to the opening night soiree at Maria’s Italian Kitchen downtown. My pal and I had the good fortune of being invited to sit with Jeannie’s party by her super-amiable manager, Maria Calabrese. (I swear, I have never seen such a lovely, caring artists’ manager since my own very first one back in the day who spoiled me for all others who came after. Maria was how they should all be, but very sadly, are far from it.) I had already been to a big foodie function right before heading to the Taper, and was still pretty stuffed from that, so it’s hard for me to review the food here for you. 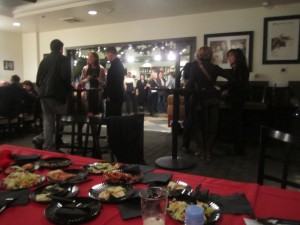 The end of the party at Maria's. Photo by Karen Salkin.

But I did notice that it was super-generous, with several pizzas, pastas, chicken, salad, and passed appetizers. I did find room for a bite-sized brownie or two, (or three, but who’s counting,) and they were delish!

In addition to the cast, I spied actress and former model, Susan Blakely, at the party, as well as Castle’s Susan Sullivan and MSNBC stalwart Lawrence O’Donnell at the theatre.

All in all, a fabulous night!