Trending
You are at:Home»THEATRE»THEATRE: ONE NIGHT WITH JANIS JOPLIN
By Karen Salkin on March 19, 2013 · THEATRE

ONE NIGHT WITH JANIS JOPLIN

Every now and then, an actor or actress is the right age, and around at the right time, to make an iconic role theirs, such as the young Barbara Streisand did playing Fanny Brice in Funny Girl. No one else will ever be able to do that again, not even the heir apparent, Lea Michele.

Well, now we have another such case with Mary Bridget Davies as Janis Joplin in the Pasadena Playhouse’s One Night With Janis Joplin. She was born to play it! If she doesn’t get an Ovation Award for this next year, I’ll be flabbergasted! More on her, and the whole show, in a second. But first, some background on my knowledge, or lack thereof, of Janis Joplin herself. 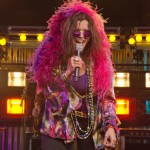 I have to admit that I’m not very familiar with Janis Joplin, except for the mostly-fictionalized Bette Midler film, The Rose. She died too early for me, and, never being a lover of this type of music, (meaning early rock, not the blues,) I never really got the big deal about her. I remember grown-ups saying that they had always been afraid her vocal cords were going to burst because of the gravelly way she sang, so it’s been hard for me to not think of that when I hear her recordings. When I was younger, I actually thought that’s what she died from! (I’ve also always been too shallow to understand the attraction of her; I used to try to figure out how a woman so not good-looking could have gotten so famous back in the day. I guess looks didn’t matter then like they do now. But when I said that to Maria, the friend I saw the show with, she dryly reminded me, “Susan Boyle.”)

My biggest connection to Janis is my image of driving down to Florida with some pals in my first college. My best friend Jill and I were in a big van with four guys. We took shifts; one girl sitting up front in the middle with two guys, and the other girl in the back with the other two guys, to rest, so we could drive straight through. The people up front got to choose the music. On Jill’s shift, those three just kept playing Me and Bobby Magee over and over. I hated the song, but whenever I hear it now, I picture Jill’s back going up and down with gusto as she belted along. It reminds me of a fun, carefree teen-age time, and it always makes me smile.

As did One Night With Janis Joplin! (Nice segue, Karen!) So, without being a fan of the real Janis, I became a fan of this show! And, that’s mainly due to the music. How’s that for a turn-around?! (I never disliked her music; it’s just never been my choice to listen to.)

The show was a whole experience, which the crowd loved. I was actually a little worried about the opening night audience at first, because Maria and I, and one guy in the front row, were the only ones bopping to the music. (So much so that the star gave props to Maria out from the stage!!! You go, girl!) But then the crowd started going wild for Mary’s performance, and by the end, they were crazy; it was like I was at a real Janis concert!

The only things missing to make me imagine I was seeing her in the Fillmore East, were darker lights, much pot smoke, and lots of long hair, (as opposed to in this audience, where mine was the only lengthy mane!) Those must have been the days.

To set the mood right off the bat, the ushers wore Janis tee-shirts and peace sign pendants, which they’ll do for the entire run. Some even rocked tie-dye head scarves! For opening night, they gave us each a thick glow stick to wave in the air. (You don’t want to know how hard I had to work to get mine going, but that’s only because Mr. X is in charge of all the ones at our house, which, trust me, there are many of!) You can buy them there for the rest of the performances, which I highly suggest, if you’re any fun at all!!! 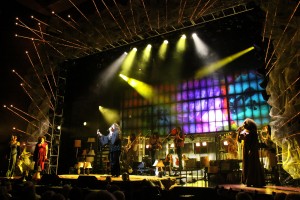 The set design, which was kind-of basic but with tons of fun lighting, seemed to be a collaborative effort between scenic and lighting designer Justin Townsend and director Randy Johnson. (Not the major league pitcher, for you confused sports fans.) I understand that having multiple old-fashioned lamps on-stage was the idea of Johnson, and not what Janis actually did, even though I could picture her doing it. (I think that American Idol‘s Crystal Bowersox had lamps on-stage, as well, whenever she performed on that show, and I always thought that she could play Janis. But now I can’t picture anyone but Ms. Davies in the role.)

It’s amazing that they were able to make Mary Bridget Davies look so much like Janis Joplin, especially because she’s so much prettier, and really looks more like perky Rachel Ray in the face! But, somehow, because of how they did her hair, and the perfect costumes and jewelry by Jeff Cone, she not only sounded like Janis, but totally embodied her! (Or my picture of her, anyway.)

So, here’s how this show works: it’s basically a concert, but with little anecdotes about Janis’ life and philosophies, told by Ms. Davies as Janis, which is what makes it a play, as opposed to just a concert.

When I first was made aware of this being staged, my immediate thought was that I couldn’t see how they were going to make a whole show out of just the seven or eight famous Joplin songs. And how a singer was going to be able to sustain singing like that for the whole time, eight shows a week! But they protect her in clever ways.

First, they fill a lot of time with her talking segments, which are amusing and educational, if you don’t know much about Janis. (I knew nothing, so I did hours of pre-show research, which really helped. I highly recommend it to everyone.)

They also had one signer, Sabrina Elayne Carten, (hey—what’s up with everyone using their middle names???,) play every old-time black singer who supposedly inspired Janis, like Bessie Smith, Nina Simone, and even Aretha Franklin. The audience went nuts for her, as well. I totally recognize her talent, but I’m sorry to say that I wasn’t feeling her. I’m sure I’m in the great minority on that one. I was disappointed in the way she did one of my all-time favorite songs, I Shall Be Released, but that might have been how she was told to do it. Even though that song has roots in gospel, I don’t think it was meant for big booming voices like hers. Just ask songwriter Bob Dylan about that one! [Note: I just listened to about twenty renditions of it on YouTube, including Nina Simone’s, (whom Ms. Carten was playing in the show at that point, I believe,) to make sure I was correct, and they were all…smaller, I guess is the word. But I also hated the shockingly weak, un-soulful one by Mama Cass, Mary Travers & Joni Mitchell.]

So, having someone else do several numbers, along with the background singers, gave Mary breaks, and opportunities to rest her voice for a little bit. My mother would have been relived because she was one of the people who had been worried about Janis’ vocal cords!

And I have to give a shout-out to the fabulous on-stage band, who didn’t miss a beat. They were just great.

I only hope that, for my New York pals, this heads to Broadway sometime soon. Any producer who doesn’t give this one a good look is making a mistake, in my opinion.

I have two important notes before I move on to telling you briefly about the rest of the day’s and evening’s festivities. In what must be an effort to preserve Ms. Davies’ voice, someone else performs the role on Saturday matinees and Sunday evenings, so I can’t vouch for her. And there’s another singer who does the “blues singer” songs at other times, as well, so you might want to check on all that when you’re buying tickets, (which I just know this review is making you go out and do this very second!)

The other is…absolutely do not miss the little attached “museum!” There are hand-written letters from Janis to her family, and the whole thing is fascinating.

On an amusing note, Janis must have been rolling over in her grave to know that one of the opening night sponsors was AARP! If she hadn’t died at the notorious (in the music biz) age of twenty-seven, she would have just turned seventy in January, so I guess it’s fitting, but Janis Joplin and an association for retired people is just a mind-boggling combination! I would have loved to see her as a septuagenarian, though.

In case you missed my St. Patty’s Day column, heralding the events to come that day, let me tell you about them now. The opening was held on this past week-end’s St. Patty’s Day, which is one of my favorite holidays all year, which sadly, no one in LA seems to celebrate it. (We all did, though, back in my clubbing days a decade ago.) I’m usually in New York for it, but I purposefully stayed in town to see this show, which you now know I’m glad I did. 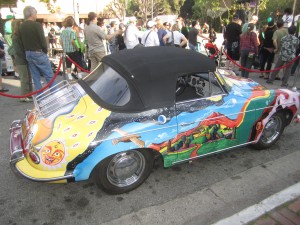 So, adding to the opening night festivities, the Playhouse hosted an all-afternoon-and-evening pre-show “Shamrock-N-Roll.” It was a community event with an almost continuous free concert, food trucks, beer garden, and activities. They even had Ms. Joplin’s own original psychedelically-painted 1965 Porsche 356C Cabriolet on display, on loan from the Rock and Roll Hall of Fame Museum in Cleveland, the city where this show actually began, as a matter of fact. I was thrilled to see so many attendees dressed in green! So fun. (Of course, according to Maria, I outdid them all; perhaps my five-shades-of-green eye make-up put me over the top!) 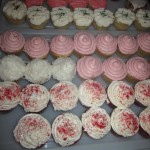 Then, after the show, we were treated to an opening night party on the lovely Playhouse patio, complete with emerald color bowler hats and green beads for everyone. There were one or two dishes each from five different eateries: Trattoria Neapolis (whose pasta was Maria’s favorite,) Border Grill (their green corn tamale was my fave,) Maison Akira, Haven Gastropub, and Sugar Fix cupcakes.

And yes, I did pinch anyone who wasn’t wearing green! Those are the rules of St. Patrick’s Day—I just did my part to enforce them!