Trending
You are at:Home»THEATRE»THEATRE: ON YOUR FEET
By Karen Salkin on July 13, 2018 · THEATRE

And that’s exactly where the entire audience at the Pantages Theatre was at the end of this show on opening night—on our feet!!  Especially me. I haven’t enjoyed myself like that in a theatre in quite awhile. 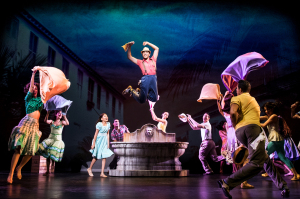 Photo by Matthew Murphy, as is the big one at the top of this page.

And let me tell you, I had the highest of expectations for On Your Feet, the Broadway musical about Cuban-American music legends, Gloria and Emilio Estefan. And more often than not, high expectations spell doom. But this show not only met mine, it exceeded them!!! By a mile. It was one of the very few times in a theatre that I found myself not wanting to be anyplace else. (Great thing for a theatre critic to admit, eh?)

Between all the colorful visuals and joyful, high-energy dance numbers, I couldn’t take my eyes off the stage for even one second to write any notes. So I hope this review doesn’t miss anything. 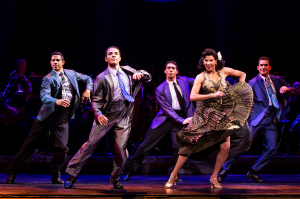 Nancy Ticotin, as Gloria’s mother, on the right. Photo by Matthew Murphy.

On Your Feet is the story of how the Estefans came to fame, but it’s so much more than that. At its core, it’s a love story; love of music, of family, of heritage, of each other. Their family histories are even touched upon (in musical fashion, of course.) And who knew that their iconic group, Miami Sound Machine, struggled for ten years, until the public came to know them and love them in 1985?

For my younger readers–no worries. You really don’t need to know anything about the Estefans, or their music, to enjoy this musical. It’s perfect for just about everyone. The music is infectious and the comedy bits work perfectly.

Unlike other “jukebox musicals,” which feature all known tunes, (but usually in a bit of a goony fashion,) this one incorporates the many Gloria Estefan hits into the scenario perfectly. I hadn’t realized that so much of their music is incredibly romantic. It’s wonderful to hear all of their songs sung so beautifully. Only one, If I Never Got to Tell You, was written specifically for this musical, by Gloria and her daughter Emily, and even that one works. 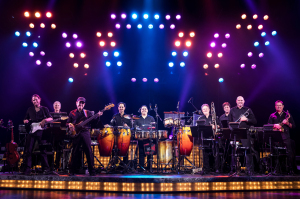 The musicians. Photo by Matthew Murphy.

The show grabs the audience from the get-go. The second the curtains open, we’re treated to what I consider to be the most exciting “overture” ever because of the upbeat music and unbelievable on-stage musicians. I learned later that many of them are original Miami Sound Machine members!!! No wonder this music is played with such gusto and heart! (Besides that those guys are, of course, the best people for the job, I really appreciate that Gloria and Emilio thought to include them in their musical. Not everyone in show business remembers from whence they came, and who helped get them here now.)

Every single person on that stage gives his or her all for the entire performance! The dancing is spectacular, passionate, and explosive. And their voices are as expressive as they are powerful. The whole show is fantastic! 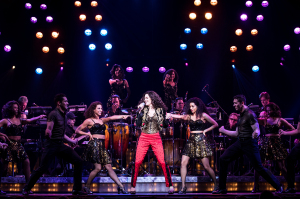 Christie Prades in the center. Photo by Matthew Murphy.

Christie Prades, who plays Gloria, sounds just like her!  Really.  Christie is so excellent that I can’t understand why she was only the understudy in the original Broadway production of On Your Feet. How is that even possible when, studied or God-given, she sounds exactly like Gloria???

As fabulous as every single performer truly is, my absolute favorite is little Carlos Carreras. OMG—not only is he adorable, he can really dance. And sell the comedy of it all!!! I was absolutely in love with that little boy! He’s the cutest thing ever, and boy, can he dance!  He might have even replaced little JT Church (of So You Think You Can Dance fame,) as my favorite young dancer, which I hadn’t thought possible. [Note: The four kids, two girls and two boys, are double-cast, so I can vouch for only the ones I saw on opening night.]

And, even with all the talent on that stage, my favorite voice belongs to Jason Martinez, who plays Gloria’s father. His ethereal number in Act I, When Someone Comes Into Your Life, is like butter! 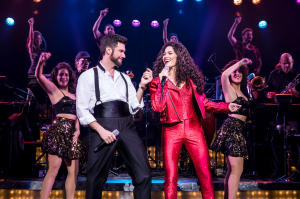 And my favorite visual is the two gorgeous Martinez men, of course! (Have you met me???) Not only does Jason have that aforementioned beautiful voice, but he’s swoon-worthy, as well. And I thought the females in the audience, (and more than a few males, too, actually,) were going to have to be revived when Mauricio Martinez, who plays Emilio, first appeared on stage rocking the shortest shorts which featured the most in-shape legs I’ve ever seen. I believe he played Gaston in Beauty and the Beast in Mexico, and I’d guess they didn’t even have to pad the muscles in his costume! (And no, despite the same last name, they are not related. I believe Mauricio has that little accent over his “i.”)

As far as the music goes, I didn’t realize that Gloria Estefan and Miami Sound Machine had soooo many hits, with such a lovely mix of upbeat tunes and ballads. What a prolific bunch. There are twenty-six songs in the show, and I was familiar with about half of them, which is pretty good for someone who’s a hip-hop chick and not a big Latin music girl. That’s how universal these songs are. I can even see it becoming the next big movie musical. (I have no idea if that’s in the works or not, but it’s a great idea, don’t you think, if I do say so myself!) 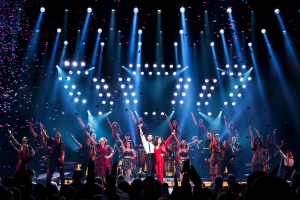 The last number of the show. Photo by Matthew Murphy.

On Your Feet features lots of clever bits, none moreso than the number that closes the first half. Conga is the best Act I curtain that I’ve seen in the very many years since the one in The Tap Dance Kid! I never even screamed and laughed so hard at the same time when I was watching my own TV show, (and believe me, I always got quite the kick out of myself!) [Note: I won’t spoil the action for you, as I’m sure other critics have, but trust me—this number is brilliant!!!]

Act II is much more serious because it’s mainly about Gloria’s life-threatening bus accident at the height of her fame, and her comeback from it. I had actually forgotten all about that incident. At the time it happened, I was too young and carefree to really fathom just what she was going through.  But since I’ve had my own back issues in the past few years, (and am still supposed to get titanium rods in my back, as well,) I get it. I really feel for her. I’m so happy that she came out of it okay, and is thriving. The success of this musical is testament to that. 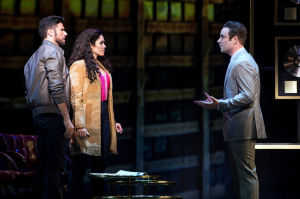 One of the biggest ovations on opening night, (as I assume it will be on every night,) came with Emilio’s line to a record producer who wants his group to sing in only Spanish, “You should look very closely at my face because this is what an American looks like!” I wonder if that sentence was already in the show when it opened on Broadway in 2015, or if it was added-in after the shameful 2016 Presidential election. Either way, it deserves the sustained applause it received.

Here’s the sign of a great show—the second it was over, I was thinking of when I can see it again! (I think the woman behind me that night will probably join me in that endeavor–she was enjoying it so much that I finally know what it’s like to sit near me!) 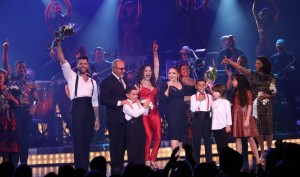 Emilio (holding onto little Carlos Carreras) and Gloria Estefan in the middle, surrounded by the cast of On Your Feet. Photo by Chelsea Lauren.

And, because it was the opening night, after the curtain calls, Gloria and Emilio surprised the assemblage, who was already on our feet, by “coming out of the dark” (as the song says,) where they were sitting in the audience and onto the stage! What a treat that was! Gloria addressed the crowd, lauding Los Angeles as an entertainment capital, introduced their young grandson, and sang the praises of this National Tour cast. The only way that could have been better is if she had sung even one little line for us. But it was great to see her and her genius husband on this fun occasion.

And here’s the biggest bonus of them all for potential audiences—the Pantages has wonderful air-conditioning!!!

Reminder: If you’re one of my Los Angeles readers, you have only this month to see On Your Feet at the Pantages, which always brings us important Broadway musicals. But if you’re elsewhere in the country, don’t despair; this same company is on a National Tour, so hopefully, you’ll get to see this show in your city. And if you’re one of my international supporters, still look for the show in your country. I can’t guarantee the production itself will be as fabulous as this one is, but we can hope.