Trending
You are at:Home»THEATRE»THEATRE: NEXT TO NORMAL
By Karen Salkin on December 2, 2010 · THEATRE

Who would have thought that a musical about a woman with bipolar disorder would work? But since the star, Alice Ripley, had already won last year’s Tony for her portrayal of just that, we in L.A. kind-of already knew it would.

The evening was a winner for me before the show even began because I bumped into Pierce Brosnan as we were valet parking, and he was lovely. He said, “See you soon,” and then he did because I kept bumping into him at the theatre. He probably thought I was a stalker by then! (You can read our exchange in my last Celeb Sightings column later this month.) 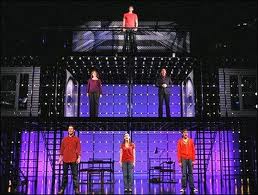 But back to Next To Normal itself. First of all, I loved the Mark Wendland-designed tri-level set. That is, until my stomach pulled every time an intrepid actor got too close to the edge of one of the upper levels! (At least my abs got a much-needed work-out.) That part was scarier than Scorsese’s Shutter Island I had just seen two hours prior! (The theme for Sunday was obviously “mental health day.”) And the actors were singing their guts out, so I seriously was always worried that they’d get carried away and fall over. Oh no–I’m turning into my little mother! (But I really did love the set, mania aside.)

The opening night audience went wild, before, during, and after. The performers really deserved the accolades; they worked their butts off. No phoning it in here. I can’t fathom how they can perform like that eight times a week. Or even once, for that matter! 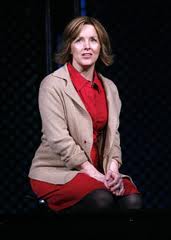 This was an all-sung show, (except for an occasional spoken sentence,) and really more of a rock opera than a musical per se. More than once, it reminded me of The Who’s Tommy, which, coincidentally, is the show that Alice Ripley made her Broadway debut in, and is the original one of this genre. (I just googled to make sure that it did, indeed, come before Jesus Christ Superstar, if you want to bet with your pals before they read this.)

Next To Normal has a six-person cast, all with powerful voices, but none more so than Ms. Ripley. That woman can sure roar! My brother, Eddie Salkin, an always-working Broadway musician, first admired her talent when he played with her in her Tony-nominated role in Side Show in 1997. Her award for this show is one that I can totally understand.

And Curt Hansen, the guy who plays her son, is a hunk. I’m so glad that I was on the level opposite him when he was shirtless!

I loved that the musicians are onstage, in separate cubicles on the sides of the top two levels. That makes the show more interesting. And, the positioning is great for audience members in all areas. This was only the third time ever that I was seated in the mezzanine, but it didn’t even bother me because I was directly across from the musicians and at least half of the action. Not having to crane my neck to look up was great! 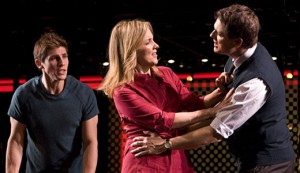 There’s not much more to say. I’m not a fan of depressing theatre topics, or loud rock-type music, but I still enjoyed most of the show. The slight drawbacks to me were that it was about a third too long, and I could make out only about two-thirds of the lyrics, mostly because the music itself was so loud. But, if you can handle the angst and decibels, this is a show that I feel fans of musicals must see for themselves. But hurry, it’s here only until the beginning of the year.

This is where I usually tell you about the after-party, but alas, even with a pretty famous-people-studded assemblage, there was none. (These theatres don’t throw them for every show.) Or perhaps I just wasn’t included this time, which would be a sad first, but I’m always just grateful to get invited to the show!

So, let me just mention that the audience included cast members from two of my favorite shows, Modern Family and Glee, (the latter of which I realized recently that I don’t even like anymore, but keep watching, just in case,) Adam Brody from my favorite television show of all time, The OC, and Chad Lowe, with whom I worked on Life Goes On, back in the day.

I was happy to see them all, but one note to opening night-ers that I feel I must give: Dress Up, for goodness sake! Jeans and a sweater are not appropriate attire for occasions such as this! Pierce and his wife, who was also a castmate of mine on a morning show when we were both starting-out in the biz, were the only celebs who were dressed appropriately, and I hope that at the next theatre opening, others will follow suit.