Trending
You are at:Home»THEATRE»THEATRE: MORAL IMPERATIVE
By Karen Salkin on October 3, 2016 · THEATRE

With the extra whirlwind that my life has become recently, I had the task of choosing among several tempting events one night last week. Realizing I was in need of an easy, relaxing, yet intelligent experience at that point, I chose the opening night of Moral Imperative at Theatre 40 in Beverly Hills. That place is always the easiest theatre in all of LA, and I’ve yet to be disappointed in any of their productions. 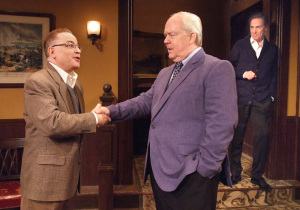 This one was perhaps my least favorite that I’ve seen there, but it was still interesting. And my friend, Carolyn, really enjoyed it, and all of the performances, as well.

I’m still not sure how to classify the genre of this play. It’s a drama, but with humor, and a murder mystery, but with knowing “who dunnit” all along. Perhaps “psychological mystery” covers it all.

My only real problem with it is with the script itself, by Samuel Warren Joseph. It’s waaay too wordy. A good ten or fifteen minutes could easily be cut from the first scene, and that would make it move so much better. (I wasn’t the only audience member they lost during that dialogue; I noticed several others using that time for a brief catnap.) And since that scene, which serves mainly to set-up the action for the rest of the play, is all cerebral, with not a lot of movement involved, the actors really don’t have many visuals with which to keep our eyes engaged. They basically sit, and on occasion, just slowly saunter across the stage. Nothing of interest there. 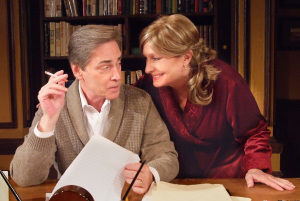 Martin Thompson and Susan Damante. (No worries–they’re not real, nor even herbal, cigarettes.) Photo by Ed Krieger.

But the almost-tedious-to-that-point action picks-up when David Hunt Stafford, as the new head of the college that Moral Imperative takes place in, comes on, in Scene II. Then the ball finally gets rolling.

And the show does open with an amusing little monolog by the main character, portrayed well by Martin Thompson.

For me the best performance is that of Susan Damante, who plays the wife. She’s not only perfectly cast for the role, but is an excellent actress, to boot. I totally believed that she was a doctor and loyal spouse of a college professor. 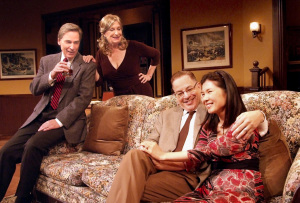 As good as the other couple was, their casting annoyed me a tad, though. What I’m about to say goes not just for this show, but for all casting in general these days. So here goes. I totally understand, and applaud, the recent push for diversity in casting. But it really does get confusing when age and ethnicity are written as one thing, and portrayed as another. So, that the younger wife is portrayed (admirably, I might add,) by an adorable Asian actress, Kyoko Okazaki, was distracting. I kept thinking that her nationality would play into the couple of mysteries. But it does not. (Nor does it wind-up having to do with a curious subplot about a tragedy that had happened to her. Actually, that bit went nowhere, period!) 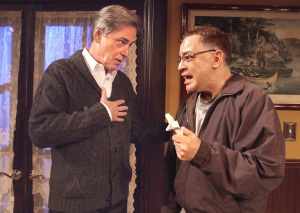 Similarly, her husband (played by the fabulously-monikered Ken Kamlet,) keeps being talked about as being a “son” figure to the main professor character, but both actors appear to be around the same age! So, of course, I assumed that might be a part of the puzzle, as well, but again, it is not. Both actors are capable enough; it’s just that their natural characteristics are confusing in this situation.

So, what’s next for theatre in America? A man playing a woman? A child playing a grown-up? One actor speaking English while another character speaks Russian? A skinny person playing a heavy-set one. I could go on and one. Actors playing other than “as written” is a pet peeve of mine. Can you tell? In professional theatre, (and film and TV,) unlike high school and college, there are hundreds of thousands of actors to choose from! Why cast “creatively” just to be politically correct? It’s just confusing to the audiences who pay good money to escape the real world and be entertained. 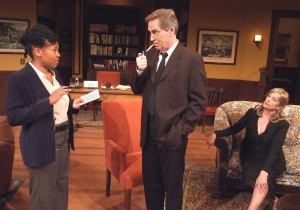 So, now that you know those peccadillos going in, I’m sure you can overlook them, and just enjoy the almost Columbo-esque scenario. The funny thing, in my own life, is that, though both my parents were high school teachers, they would have enjoyed different parts of Moral Imperative. My English teacher mother would have loved the Murder She Wrote aspect of it, while my more intellectual (sorry, mom) Speech Department Chairman father would have been fascinated by that way-too-long-for-me dialogue at the beginning. Maybe that’s why I land in the middle of the whole thing!

[By the way—in case you’re curious about the title, here is Wikipedia’s definition of it: “A moral imperative is a strongly-felt principle that compels that person to act. It is a kind of categorical imperative, as defined by Immanuel Kant. Kant took the imperative to be a dictate of pure reason, in its practical aspect. Not following the moral law was seen to be self-defeating and thus contrary to reason.”]