Trending
You are at:Home»THEATRE»THEATRE: LEAP OF FAITH
By Karen Salkin on October 5, 2010 · THEATRE

I rarely love new musicals, but this Broadway-bound one I really enjoyed. Leap of Faith is based on the 1992 movie of the same name that starred Steve Martin. If I saw the film, I don’t remember it, which is good because I like to go into theatrical experiences not knowing what the action will be. 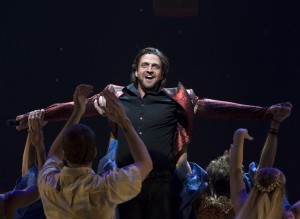 Most of the audience seemed to totally love it, and, although I wasn’t as enthralled as they appeared to be, I was in it with the majority. I spoke to several people at intermission and the post-party, who were of a different mind. But this is my column, so I’m emphasizing the positives. (But just FYI–I do know that the music, which was gospel-lite, and choreography, were totally weak. I was pretty surprised to realize that they were done by multiple award winners Alan Menken and Rob Ashford, respectively.) 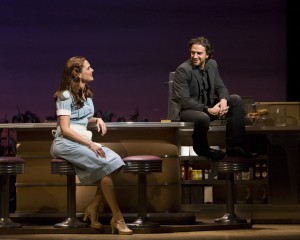 The story is of a con-man preacher’s (Raul Esparza) unplanned stop in rural Kansas. (I can’t tell when it’s supposed to take place because some of the language was so today, but everything else about it cried-out that it was of days long past, so I don’t really know.) Then, of course, there’s a local waitress (Brooke Shields,) her crippled son, the mean sheriff, and the bad influence on the con-man. And a gospel-esque choir.

The story is a tad lame, too, but it’s not boring and moves along pretty well. The best part is watching Raul work. I swear, this guy must lose twenty pounds a show! I don’t know how it’ll possible to do eight performances of it a week. His performance is kind-of mind-boggling.

The funny thing, to me, was that the whole time I was thinking that he looked like every guy I went to high school with in Brooklyn, and then the play revealed that the character is really from the Bronx. (His bio has Raul as a Cuban dude from Miami, which is almost the same thing as a Jewish guy from the boroughs.) 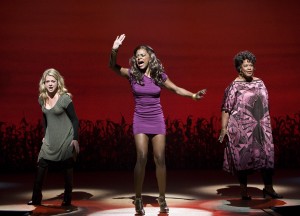 The best number in the show, "Are You On The Bus" perfomed by (L to R) Kendra Kassebaum, Krystal Joy Brown and Kecia Lewis-Evans. Photo by Craig Schwartz.

The four other main voices, belonging to Kendra Kassebaum, Krystal Joy Brown, Kecia Lewis-Evans, (oh–triple Ks!,) and Leslie Odom, Jr. were wonderful, as well. Which brings us to Brooke.

So, here’s the deal with her. We all know that she’s not much of a singer or dancer, although she has starred in several Broadway musicals over the years. (A top Broadway musician I know really well, who’s Mr. Negative usually, did laud her when she appeared in Wonderful Town and said she really brought in the audiences.) But in this case, with her songs being few and far-between, the producers didn’t really need another great singer–they needed star power. And that’s what they got! I think the average Joe who frequents Broadway shows will flock to see her in-person. Maybe especially to see her not sing well, so they can feel better about their own lives.

But I feel that she’s good enough. And even jaded Hollywood Bon Vivette moi, who’s met her before, was interested to see her perform in person, as opposed to on film or television. Brooke’s still great-looking, only it’s a tad strange because she’s a handsome woman now, rather than a gorgeous girl. Her body’s perfect and her head has held-up well. It must just be killing her, though, to have to wear a wig over her naturally gorgeous tresses. I know it would me. But then again, I’m not that great of an actress. (I’m fighting the urge to add “either.”) 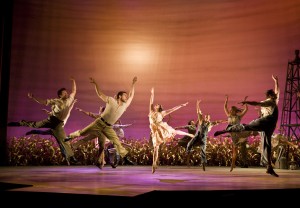 The two technical achievements I thought were great were the costumes, that were so purposely colorless as to highlight the sad lives of the townsfolk, and the pared-down sets that showed us exactly was what was going on within the story so that no more adornment was necessary. And the ending technical touch that I don’t want to spoil for you was a fun treat.

So, all in all, I can happily recommend this Ahmanson Theatre World Premiere. I’d just say to go while Raul Esparza is still fresh because it will indeed be an amazing feat if he can keep up his incredible performance level indefinitely.

Now to the after-show festivities (as I implored the reluctant-to-party Mr. X.) It was at J Restaurant and Lounge downtown. It’s primarily a clubby bar scene, so it was amusing to see so many grown-ups enjoying themselves in it.

The passed hors d’oeuvres of giant prawns, truffle cheese puffs, and beef short ribs, to name a few, were mainly good, and they cleverly had mini buffets of cheeses and tiny pastries set-up in several places around the two-story space.

Most interesting, Mr. X and I partied alongside Modern Family’s Eric Stonestreet and company. We spotted Neil Patrick Harris there, too, and Glee’s Matthew Morrison, who sat in front of us with Michael Benjamin Washington, who played a journalist on an episode of the show last year. (And they sat together at a recent awards show, too, possibly the Tonys or Emmys.)

This was an overall excellent night of theatre and fabulousness in Los Angeles, and I was happy to bear witness to it all.