Trending
You are at:Home»THEATRE»THEATRE: LATIN HISTORY FOR MORONS
By Karen Salkin on September 13, 2019 · THEATRE

Some people are just born funny, with no trying necessary. And John Leguizamo is one of those people. It must be a trip to have him as a father!

Before I glowingly review his Latin History For Morons, which just arrived at the Ahmanson Theatre after a Tony-nominated Broadway run, I have to admit that even though John Leguizamo has done something like seventy-five movies, I have seen only two of those films, and I don’t remember him from them at all. So this was a brand new experience for me. [Note: In Regarding Henry, he played “Liquor Store Gunman,” so of course I didn’t notice, and I basically fell asleep during Moulin Rouge, so I don’t remember any of that flick.] 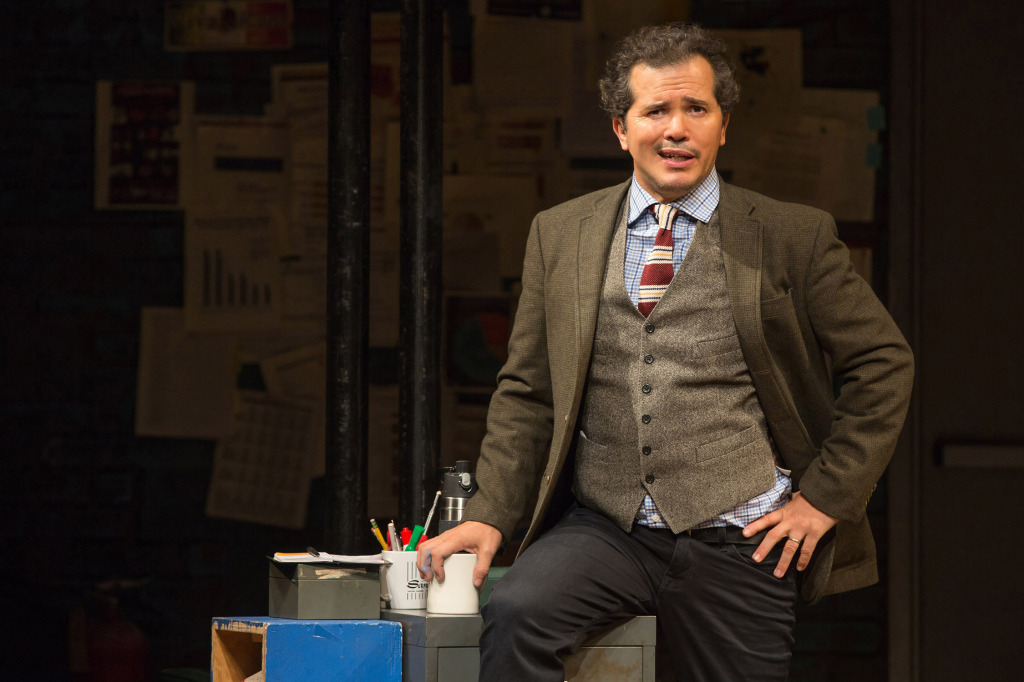 On top of that nescience, I usually shun one-person productions. But I’m such a fan of the Ahmanson Theatre that I never want to miss any of their presentations, so I had to see Latin History For Morons.  And I’m glad I did.  Even though I’m far from Latin, I sometimes am a moron!  So this was definitely for me. (On a side note about the theatre, I brought a friend who had never been there before. She was enchanted by the entire evening, from observing the impressive Music Center with virgin eyes, to seeing the many opening night celebrities so up-close and personal, to taking snaps of the lobby photo ops, to admiring the excellent sound system, to the show itself. So I thank the Ahmanson for making me look so good to my pal!)

I had been pondering how I was a tad familiar with John Leguizamo’s name and penchant for solo endeavors when I’ve never seen his work. And then I remembered–it’s because he won a Special Tony Award last year, (which is the same way I heard of James Corden before he became really famous.  It pays to be smart enough to watch the most under-viewed, and under-valued, awards telecast!)

In case you also are new to John Leguizamo’s wit, Latin History for Morons is presented as a lesson for the audience, complete with blackboard and colored chalk, (which you know I love!) A more fun time in a classroom I cannot imagine. He incorporates just about every type of humor imaginable–stand-up, skit, blue, impressions, accents, ethnic, performance art, even musical. And the guy can dance!!! How can one person be so talented?! 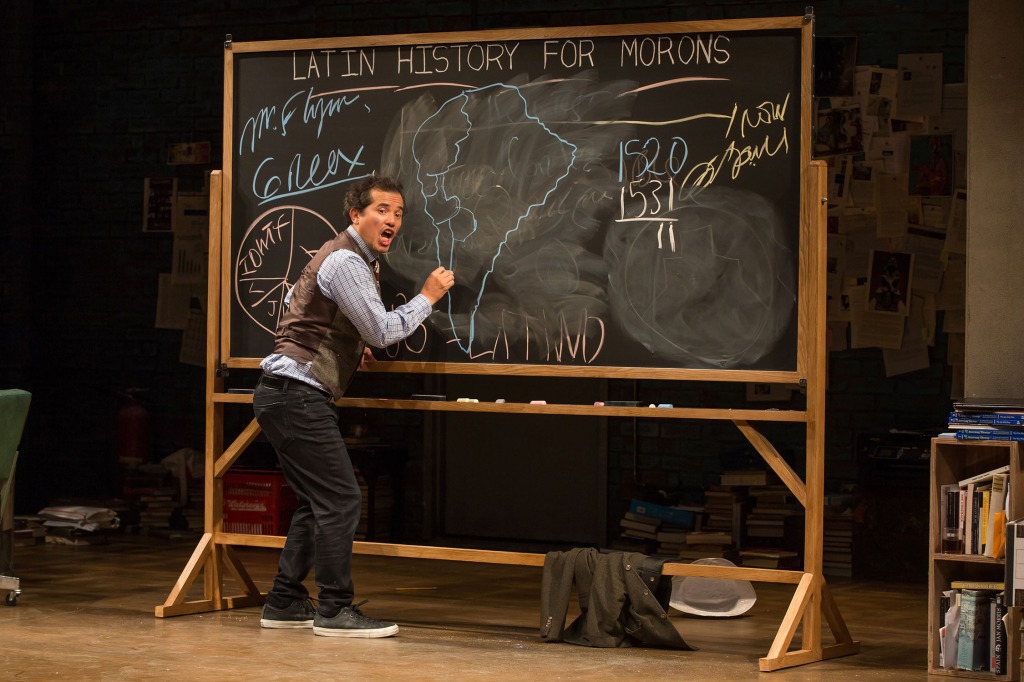 And, like few teachers I ever had in all four of my colleges, he makes it fun. (Duh—on Broadway, it was nominated for a Tony, so of course it’s fun!) The amazing thing is that he’s really giving us fascinating facts that have been, shamefully, left out of American history books. But I was laughing so hard that I didn’t get that upset about the world’s injustices when he was apprising us of them. And then it hit me later, big-time. I hope everyone who sees this show has that reaction. And keeps having it!

I’m ashamed to say that even with my 147IQ and two college degrees, I’ve learned the most about real American History not from school but from recent Los Angeles theatre! Last year, Allegiance taught me about Japanese internment camps, and just last week I was informed about the plight of Chinese-Americans in The Chinese Lady. And the very next night, John enlightened me about what the Latin people have gone through, including the Colombian Holocaust and the Indian Removal Act. God bless theatre, man! And, shockingly and appallingly, it’s all happening again now! We really do need to desperately try to stop the horrors that are being perpetrated upon yet another group of immigrants to this country by the unbelievably insane and unfit head of our government even as I write and you read. Shame on America, then and now! (Whew—I can understand why John gets so riled-up while discussing this topic!)

At the core of this two-hour monologue is a story of bullying, which always breaks my heart. John tells us up front about the bullying of his son, who he says is graduating from middle school, which would make him fifteen at the time. (Well, fourteen, if like me, he skipped a grade back then.) In real life, the son is nineteen now, so John most likely worked on this piece for at least two years before he first presented it! That’s true dedication. 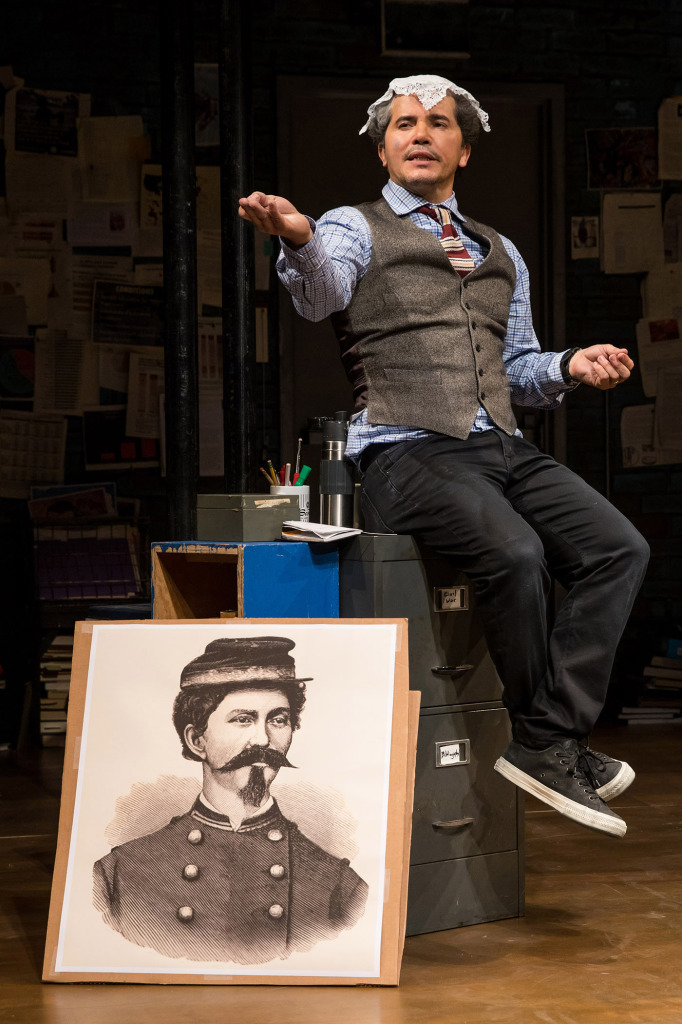 The narrative goes that, in trying to help his son choose a hero for a school project, John realizes that there are few Latin ones featured in existing history books. So he begins his own search for a Latin hero to share with his son. And with us. And the facts he comes up with are far from anything I’ve ever learned in school! I always dig into subjects I learn about in these shows, and John has given me at least a whole month’s worth of research to do! I never knew about any of it! (Also, I notoriously took my naps during history class, so I didn’t even know the Caucasian versions of these events. Just enough to run the category on Jeopardy!)

But to enjoy Latin History for Morons, you really do not need to have any knowledge on the subject. Or even a quest for knowledge. I’m sure he hopes you get some awareness out of this presentation, but it is a show, after all, so entertainment is the real goal. And that it totally delivers on.

On opening night, John got laughs from the get-go, (as I’m sure he does at every performance.) And I had been wondering how one guy was going to fill that gigantic Ahmanson stage—silly me!

He speaks so naturally that he’s a pleasure to listen to. It’s like he’s in my living room, just talking to me. John Leguizamo is one those people who are just naturally funny. Even when he’s just talking, without any schtick, he’s making us all laugh. Sometimes with just a word. (I’ve rarely seen anyone else be able to do that, outside of Dame Edna and Mr. X! It’s a true talent.)

Latin History for Morons features a ton of absolutely brilliant lines, but I was enjoying it all too much to spend time writing them down for you. But the one I will never forget is that he said the conquistadors were “like NBA players at a Kardashian pool party.” That one had people choking on their laughter.

Actually, the audience I saw it with was really raucous. That took me a bit by surprise because most of them were the regular opening night-ers, who are usually so staid and calm. I really enjoyed seeing them let their hair down like that. 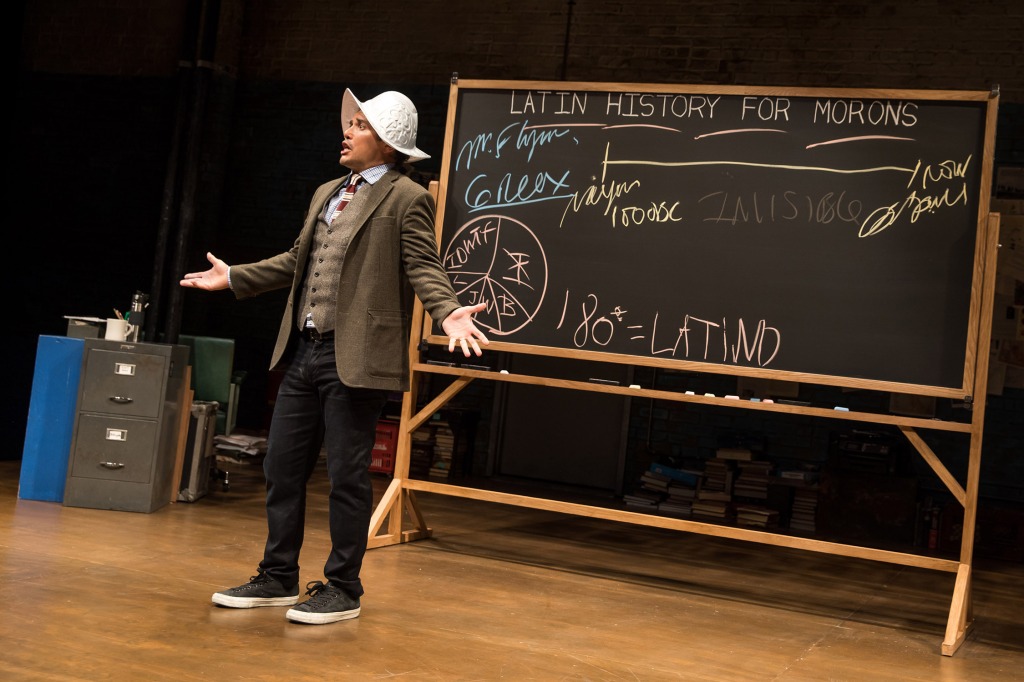 But I do have to say that the production is way too long. A good twenty minutes could easily be cut, and I think everyone would go home a little happier. Not to mention a little earlier. (The CTG website says that Latin History For Morons runs an hour and fifty minutes, but on opening night, it was over two hours! That’s too hard to sit through with no intermission.) [Note: This is not just my opinion, by the way. While totally praising the show as we exited, I heard many people expressing the same sentiment. Just most others are not brave enough to say it where it counts.]

The first hour went flying by. And then I began to look my watch. I was still fine when I thought there were only about twenty minutes left. And then the scenario seemed like it was coming to a natural conclusion when the tone got a bit quieter and more serious at his family’s Thanksgiving. And I got ready to jump to my feet and wildly applaud. But then it kept going and going and going. I’m sure John has enough material to do a twenty-four show. And energy enough to pull it off. But the audience does not. It was actually too much of a good thing. (Kind-of like this review. Don’t you wish it had ended about four paragraphs ago?)

And, in all honesty, I didn’t love every single second of it, (like when he imitated Stephen Hawking’s electronic speech, which was so not necessary, and I never understood how looking for a Latin hero for a school project would ward off bullying,) but he had me for about ninety-seven percent of it, which is pretty darn good for a one-person performance!

John has been doing Latin History For Morons for about two years now, which I wholeheartedly admire. I could never repeat even one of my stories for the entire run of my former TV show, Karen’s Restaurant Revue! John has been repeating the same anecdotes about eight times a week for about twenty-four months!!! I can’t even figure-out how he is able to do that! Perhaps hearing the guffaws of the audience give him that superpower.

I’ve learned that there’s a film version of Latin History For Morons, as well. But I one hundred percent advise anyone in the Southern California area to see the show live at the Ahmanson. There’s something so special about being a part of an appreciative and laughing audience that seeing it on TV in your home just cannot give you. And I have a feeling that each performance has a bit of a different vibe to it, especially because John speaks directly to certain members of the audience from time to time.

I can only hope that since his wife is Jewish, his next show will be Jewish History For Morons; I’d love to learn the truth about my people in John’s inimitably comedic way.

On one more very personal note, here’s something I really thank John for. In his interview in the program, he said, “I need to please me, because that’s who I write for, really, and if I can write for myself and please myself, then I know it’ll please somebody else.” That really got to me because I have always written for others, never for myself, And after reading that quote, I’m going to let myself off that hook a little bit. I actually did write one review just to entertain myself way back in the day, and it was so funny that I didn’t publish it because I thought it would upset someone. But now I’m telling you to keep an eye out for it one of these days, thanks to John Leguizamo.

So, to sum-up, here’s the surprising thing—in addition to having a wonderful time, I actually did learn some Latin history. New knowledge and exercising one’s abs from two hours of hard laughter—what more can one theatre experience provide?!