Trending
You are at:Home»THEATRE»THEATRE: LATE COMPANY
By Karen Salkin on January 25, 2017 · THEATRE

This riveting play was perhaps the best one I’ve seen at Theatre 40 in the two years that I’ve been a regular there. The writing is intelligent and this production of it unquestionably does justice to the script. 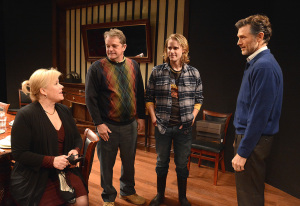 Jennifer Lynn Davis, Todd Johnson, Baker Chase Powell, and Grinnell Morris. Photo by Ed Krieger, as is the big one at the top of the page.

Unlike all the other critics who will ruin the story for you, I’m telling you to not know the plot-line of Late Company going in. It’s written so as to just let the narrative unfold, which is unequivocally how you should experience it.  I do need to give you a couple of clues, though, in case the topic is something that you need to avoid: it deals with familial loss.  And teen-age bullying, so it’s appropriate that a production of this important play is in a theatre that’s headquartered in a high school!  Every kid in there, and actually everyplace, should be made to see it.  It’s a powerful anti-bullying message, although I don’t ever know if anything would stop those people who are evil enough to behave that way to begin with. 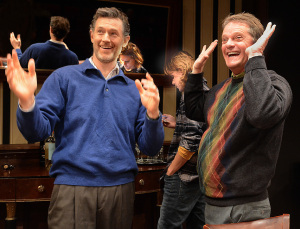 Grinnell Morris and Todd Johnson, with Baker Chase Powell in the background. Photo by Ed Krieger.

Late Company is not a comedy, although there are several laughs in the first third of the short ninety minute play. In a way, it reminded me a bit of Who’s Afraid of Virginia Wolff, although the stories themselves are not similar. And no one is imaginary.

The casting is excellent.  I totally believed that each actor was exactly who he or she was supposed to be. Baker Chase Powell, the youngest actor I’ve ever seen at this theatre, more than holds his own with the grown-ups. I had to keep reminding myself that he’s an actor because he really does seem like just some Canadian kid, especially one I’d perhaps run into in Whistler. (That’s a reference to that this play is a Canadian export.) [Note: I should have realized he’s in the biz, though, just by that moniker!] 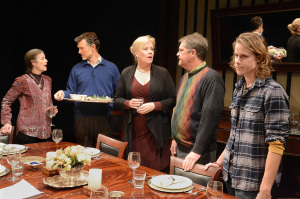 And the staging is interesting. (From my post-show research, I believe that was written right into the play.) Most of the action takes place during a sit-down dinner party, so, no matter where in the theatre you sit, you won’t be able to see every character’s full faces. They definitely do not rotate enough for you to catch a sufficient glimpse of them all, but again, I think that’s part of the planning. So, each audience member has a different experience of the show, depending on which character you are facing for the dinner.  I sat facing the mom whose house it is, (played perfectly by Ann Hearn,) and I absolutely recommend that you do that, as well. (In Theatre 40, it’s best to see her from the very far side section, and as close to the left in the row that you’re in. You will hardly see Grinnell Morris, who plays the handsome father, from that vantage point, but, to me, the star of the ensemble really is the mother.) Or maybe just see the play multiple times, sitting in different areas. If there’s any show in town that bears a repeat viewing, it’s this one. [Note: I learned later that there is a big mirror on the far wall of the dining room, so I’m sure that’s a benefit to the people in the main section of the audience. But I didn’t even notice it from the side area.] 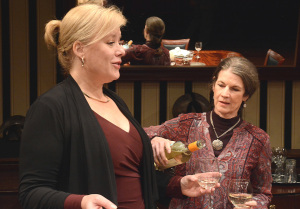 I have to give director Bruce Gray and the actors, especially Todd Johnson and Jennifer Lynn Davis (the two who were facing out,) extra props for what some may consider a small thing, but, trust me, it is not. During the dinner party, they actually eat! I cannot tell you how hard it is to eat and drink while acting; not fun. But they all kept it going with aplomb. Major kudos to them for that.

While watching the play, I could not figure out why it was set in Toronto, but then I found-out that the very young playwright is Canadian, so that made sense. But I did get distracted every time one of them said, “a-boot.” 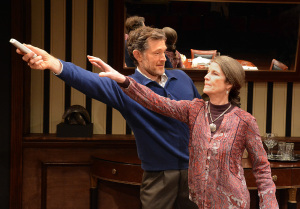 Other than that, I have not even one little issue with this show. Nor did anyone else on opening night. At the post-performance reception, all I heard were legitimate raves. Every single person there seemed to echo my sentiments that this was the best play Theatre 40 has ever produced. (And most of the others have been subscribers for decades!)

So, if I were you, I’d hightail it over to this interesting theatre in Beverly Hills High School to see Late Company. And if you bring a potential bully along, that would be even better. If this play changes even one person’s bad behavior, it would have done so much more than just entertain us.