Trending
You are at:Home»THEATRE»THEATRE: KINKY BOOTS
By Karen Salkin on April 15, 2016 · THEATRE

What a happy show this is! Believe it or not, I had never before seen Kinky Boots! I had almost done so a few times, but, unfortunately, I was always too time-constrained, on both coasts. I’m thrilled that I made the time to go to the wonderful Pantages Theatre in Hollywood for the opening night this go-round. (I was so excited that I even polished my nails a sparkly red to match the show’s logo, broke out the extreme glitter eyeshadow, and wore my own kinky boots! How’s that for dedication?!) 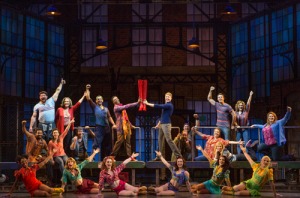 I’m sorry but this is the only photo I’m including with this review because I don’t have any of the cast at the Pantages, and I dont want to be misleading. But, trust me, the show is colorful! Photo by Matthew Murphy.

This musical is in Los Angeles for two weeks only, so I suggest you do the same. (Go see the show, not get all decked-out as I did, though if you’re fun, you could do that, too.) I’m not exaggerating about this—I’ve been having an awful headache for the past week, and am stewing about a super-stressful situation with horrible people, which is occupying much of my mind these days. But all of that just melted away during the show! I didn’t have one thought other than about what I was witnessing on the stage before me. What a wonderful gift that is for a musical to give! It’s so much more than is expected from any entertainment.

Seriously, when I got home and was telling Mr. X about it, I mentioned that my facial bones were hurting, and he, correctly, pointed-out that it was from smiling so much, which I did for just about the entire show.

If, like me, you’ve never seen the somewhat obscure 2005 British film on which the musical is based, (which, in turn, was inspired by a true story,) I suggest you research the premise for yourselves, because you know that I like to experience everything for myself, and I assume many of you feel the same way. So I don’t want to ruin the story here for potential audience members, as so many other critics feel the need to do.

It’s a basic fun “difficult journey with a happy ending” story, with twists, and some knock-out visuals, fantastic singing voices, and wonderfully inventive production numbers. This touring company features a very interesting, eclectic cast, too. It’s just about the most different-looking group of performers I’ve ever seen; not your typical Broadway types. That makes the show even more special.

I can see why the guy who played the drag queen shoe designer on Broadway won the Tony. I’m sure he was great, but, if performed right, the role itself is a star-maker. With all the hoopla about that guy, I wondered how this “Lola” would be. Well, fear not–I can’t imagine the original being any better than the beautiful J. Harrison Ghee, whom we’re lucky to have the pleasure of seeing in this touring company. I love his voice! (I’m not alone there—everyone went nuts for him on opening night!) Every time he sang, he gave me a great feeling, like the old school Motown voices did. I could have listened to just him all night.

But Adam Kaplan, the guy who plays the owner of the shoe factory, also had a bring-down-the-house turn with his solo, Soul of a Man, in the second act. It’s a powerful number, and he performed it perfectly.

And the main girl, Tiffany Engen, who combined an excellent voice with lots of visual humor, was an audience favorite, too. I’m usually not a fan of such over-the-top acting, but it’s what the role required, and I laughed as loudly as anyone.

There was seriously not a weak performer in the bunch, which is rare for me to think. They, along with the script by Harvey Fierstein, provided a wonderful time for all.

What made me happiest, though, was seeing old school sitcom actor Jim J. Bullock up there! I just wish we had gotten to hear him sing more than a few lines; he has a beautiful voice. I used to know him a bit back in the day. One of my pals had parties where people actually got up and sang, and I melted every time Jim (or “Jm,” as he was known back then) graced us with a song. So, when I saw his name in the program here, I was hoping for a similar experience. Sadly, his part was a non-solo one, but, if ever you get the chance to hear him in another venue, I suggest you take that opportunity.

Now, since you know I’m always honest, I do have to mention the very few shortcomings of Kinky Boots, but, I promise, they don’t take away from the overall enjoyment of the show. So, here they are: 1) I don’t know why they could not have just relocated the setting from England to a small town in America, so the cast wouldn’t have to struggle with fake English accents, and we could understand them a lot better. And, while we’re on that topic, 2) I could barely make-out any of the songs’ lyrics, so it was good that I don’t think they were there to advance the story, as with shows that are all songs, like Les Miz. And, 3) there don’t seem to be any memorable tunes among the Cyndi Lauper-penned ditties, so I had nothing to wake-up humming.

But go see Kinky Boots for the performances, the story, the voices, and the colors, which you know I loved! The drag queen costumes, and especially the shoes, by Gregg Barnes, made my mouth water!

And there are many great lines, as well. When Lola says of her impending audience, “There’s a room full of people waiting to feel normal by comparison,” it made me think that’s probably why my fans loved my TV show back in the day! I had never thought of it until now!