Trending
You are at:Home»THEATRE»THEATRE: HAIR
By Karen Salkin on January 11, 2011 · THEATRE

About a decade ago, Mr. X and I attended a private screening every Sunday. We watched the assemblage walk out grumbling each time, and felt the same, due to one heavy film after another. Then, after Toy Story 2, he pointed out the difference in the vibe in the screening room–everyone was alive and joyful! He said that this is the way people should be when leaving an entertainment event. That lesson stuck with me, and I always look for movies and shows that can produce that happiness. 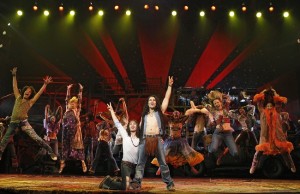 Well, that’s the way it was on opening night of Hair at the Pantages Theatre last week–in spades!!! The audience was abuzz with delight–no one even seemed to want to exit! (Especially when the actors invited anyone who wanted to to come onstage and join them for a reprise of the finale!) I always applaud a show that can do that for people.

In all honesty, Hair has never been my cup of tea. (I’ve seen at least two other productions of it over the years, and even chose to use its history for my first college term paper as a theatre major.) And, having just flown in from a month in New York about twenty hours before this opening night, (in time to celebrate my January 14th birthday, I might remind you all,) with very little sleep, I was way too jet-lagged to judge this production myself. So, I have to go with the opinion of the masses, and love it, they did, including my friend, Lucia, who contributed to this review.

For the handful of you who aren’t familiar with Hair, it’s about hippies not wanting to join the Vietnam War. (In truth, I’ve never understood what the heck is going on with the story, but I always have Google to help me out. Wish I had it in my college days!) I’ll leave all the political implications to other reviewers to discuss, except to say that, here we are, over forty years after this piece was written to protest the Vietnam War, and we’re still losing our citizens in yet another world conflict. What a supreme shame.

Since I couldn’t really follow the story line, I just went with the flow of the musical numbers. It’s high octane energy from the second the show opens with Aquarius to even after the curtain call with the aforementioned whole audience rendition of Let The Sun Shine In. And everyone in the cast has a wonderful voice, especially Paris Remillard as Claude, the boy from Queens who has the biggest draft dilemma, and Caren Lynn Tackett, the woman who played the pivotal female role of Sheila. I’ve heard her song, Easy To Be Hard, for seemingly my whole life, and had never even once enjoyed it before. Now, I can’t stop singing it around the house, much to Mr. X’s dismay.

Lucia added that “the music was upbeat and infectious,” and she thought “the pregnant chick (Kacie Sheik) was funny,” while I loved her singing voice. Lucia reminded me that the next night, at a screening, we kept noticing fashions that seemed to be influenced by Hair and we’d signal them to each other by saying things like, “That girl must have seen the show already.” Good times.

I do have a few tiny bones to pick, though. The first is that these are supposed to be all young people, (they even mention that the main guy gets kicked-out of high school!,) but they look more to be the age of the teachers. (I know, I know–dramatic license. But still…)

The main thing that really bothered me is that the lead guy, Berger (played by Steel Burkhardt, who apparently makes other girls swoon,) kept running around the stage in the Jack Black exaggerated style, only this guy wasn’t kidding. I don’t know if it was his choice or the director’s, (or the author’s, for that matter,) but it was really annoying. The whole production is full of energy–we don’t need any ADD-ing from the star.

And speaking of Berger, the staging made it seem like he and several of the guys were…having relations, shall we say, but I’ve always thought that the free love era was about everyone sleeping with multiple partners of the opposite sex. I can be wrong about this, but in all the other media I’ve seen about hippies over the years, except maybe for the film Milk, I really have never noticed so much male-on-male grabbing and touching as this production portrayed. (And the public had a problem with the incredible Adam Lambert’s performance on the American Music Awards last year? Those critics better not see these guys!) Again, hippies aren’t even close to my area of expertise, so I’m not sure about this one. It just didn’t ring true for me.

And, lastly in my druthers, I really wish that the program had listed these actors’ credits rather than some cutesy baloney from each that I guess is supposed to be evocative of the 60s. I had to spend way too much of my precious time researching each member of the cast because I like to give people their due.

Outside of those tiny criticisms, I have to re-iterate the happiness in the room after this show. And to me, that’s what theatre is supposed to be about.

[Note: I just noticed that I didn’t even mention the few seconds of “dimly-lit” nudity by just about the entire cast! My, how times have changed. It was not even shocking to me in the least nowadays. But, I thought I should mention it, for those it might bother, and to let parents know, so they can make their own decisions.]