Trending
You are at:Home»THEATRE»THEATRE: GOD OF CARNAGE
By Karen Salkin on April 15, 2011 · THEATRE

I attended the star-studded opening night of the excellent God Of Carnage at the Ahmanson Theatre, and, shockingly, I really have nothing profound to say about it. I’ve been wracking my brain for something clever to write, and have come up with nothing on that front. The play is clever enough–it doesn’t need my bon mots.

This Ahamanson production reunites the original Broadway cast, which I feel is quite the coup. How often does that happen? I think not too. You know how most people go to New York to see plays? Well, I even postponed my spring trip to NYC to see this one here in Los Angeles! 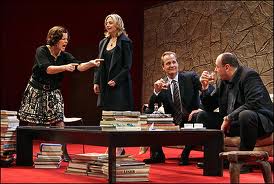 And I’m glad I did, especially with this cast. The play holds up on its own, though, so, as long as it features good enough actors, it probably doesn’t really need the star power of James Gandolfini, Marcia Gay Harden, Jeff Daniels, and Hope Davis, but they certainly bring their all to the stage, especially Ms. Harden, who won the Tony Award for this show. She was a revelation to me.

For some reason, I had always thought of her as an older woman, from the time I first became aware of her presence in films many years ago. I don’t know why. I thought of her as older, in charge, and kind-of chubby. But the only one of those concepts that holds-up in person is that she’s definitely in charge. I was surprised to see that she’s a tiny little thing, with skinny legs and giant feet. She’s really cute.

And what an actress! Some of her moves are brilliant. Don’t take your eyes off her for a second. All four of them come through in this play. I feel bad admitting this, but I’ve never been a fan of any of the quartet. I didn’t dislike them; I just never gave any of them a thought. They’re all talented, but just never appealed to me on any level. But they’re all so perfect in their clearly-defined characters that I now view each of them with a newfound admiration.

The play is short-ish, about an hour and a half with no intermission. You just have to sit back and let it unfold in front of your eyes. It takes awhile for it to get rolling, but to me, that’s part of the beauty of the design.

The show begins with two well-mannered, successful, grown-up couples discussing an altercation between their two young sons. That’s all I can tell you except to just trust the journey. There are lots of hearty laughs. And some brilliant lines, like when Gandolfini’s character states, “Children devour our lives and then they destroy them.” You have to hear him deliver it.

As the audience roared with laughter as the action got really rolling, I was knowingly bemused by it because it was just like an evening at home with Mr. X and me. (I’m basically kidding, but on more than one occasion I’ve had to tell the neighbors that we were rehearsing Who’s Afraid of Virginia Woolf. Fun times.)

And I loved the Mark Thompson-designed set! The first view of it was stunning. I’m so glad they kept it behind a curtain until the play started. [Sometimes theatres have the sets out in the open as the audience arrives. This one needed to be revealed as it was.] On the other hand, I didn’t love his “costumes,” per se, but I understand how they were designed to give us the measure of the characters, and to contrast with the set. I do applaud that concept.

[Of interest–the play takes place in Brooklyn, where I live about a quarter of the year, so I can totally envision the surroundings, but it’s written by French playwright Yasmina Reza, so I’m assuming the original was set somewhere in France. It was then produced in Zurich, London, and Ireland, so I’m curious to know how these different settings manifested themselves in those productions, if at all.]

My only slight problem with the play is that there’s no real ending. I don’t think it really matters, though; there’s really no resolution to be had, or needed, for that matter, in this situation. On opening night, it just kind-of ended, we gave a standing ovation, and then walked-out upbeat and happy. The body of the play is what we were buzzing about, not the lack of conclusion to the action. 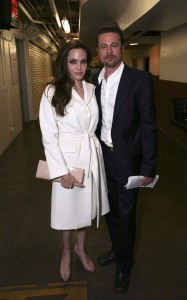 And on that night in particular, we got to move our attention over to the celebrity-laden assemblage. Unfortunately, once again, there was no opening night soiree, so we had to be satisfied with star-spotting just in the auditorium and outside the theater, but this one was the juiciest one ever because it boasted the two biggest stars around–Brad Pitt and Angelina Jolie!

Brad and Angelina–OMG!!! Just a few rows in front of me. Thank God they were off to the side of me a little or I might have been arrested for stalking. I just love them as a couple so much. I have so much respect for them as people.

Seriously, the guy who pointed them out to me always has a twinkle in his eye, so I thought he was pulling my leg. But there they were, quiet as can be, just enjoying each other and the surroundings. There’s something so regal about Angie. They were both rocking the same slicked-back long-ish hair, too. Very together of them. I have a strong feeling they’re the direct opposite of the couples portrayed onstage that night. I can’t picture them ever cursing each other out. (And, as the proud parents of six, they definitely wouldn’t agree with that line of Gandolfini’s that I quoted above.)

[Note: before the show begins, when the announcement is made to “locate your nearest exit,” I thought–“yeah, mine is wherever Brad and Angie are going;” if I’m going to be stuck someplace, it may as well be with them!]

I have one more celebrity sighting to tell you about, pre-show, and though I’m relating what I saw, I also want to admonish that you can’t always judge a person from one little incident, so keep that in mind.

After I picked-up my tickets, I saw Will Ferrell walk over to a woman who was probably his wife, and another companion, and they were talking about something. I don’t know what, maybe their tickets, but she was relaying information, not just greeting each other.

Pretty quickly, several of the usual fans surrounded him for autographs, which is to be expected at these openings. Some of them have so many pictures with Mr. X that I’m afraid they send them to their parents and say he’s their friend. Or worse–boyfriend. Sometimes it’s not fun, but I always feel that celebs have to accommodate their fans, as long as the number is a manageable one, which this was.

But Will ignored them and started walking away. When they begged for autographs, papers and pens in outstretched hands, he told them he had no time, even though the curtain was almost a half hour away. I was really surprised to see that. And again, it’s hard to judge his niceness, or lack thereof, by just one small situation. There was one time, back in the day, that it appeared that I ignored a fan, and it still haunts me, so I try to give people in show business the benefit of the doubt. Not that I ever had fans clamoring for my attention like a really famous person does, but this is what happened:

Once, I was at an event that was comprised of all celebrities and their dates. It was at the height of my show’s popularity, and people in the biz, in general, were really supportive of me. As I walked into the soiree, several actors walked up to me at the same time to give me props on the show. It was a little overwhelming, and, since I’ve always given anyone I’m talking to my complete attention, I couldn’t talk to everyone at once. I still feel bad that I told one actress I’d be right back to her, and then never found her again at the gargantuan event, though I really did try. Seriously, it always bothers me, and it was over a decade ago!

So, I never understand turning fans down, especially when it’s just a few of them, with no others in sight. It would have taken Will about twenty seconds to sign the ten autographs, and might have meant something to the fans. But, on the other hand, they may be the creepy ones who just procure the John Hancocks to sell, and maybe he knew that. When I told Mr. X the story, he suggested that perhaps Will was just rushing into the theatre to meet with Brangelina. It’s a possibility. (But even Brangelina were spotted giving autographs, in the parking structure, no less!!!)

So, I guess we didn’t really need an after-party for some fun Hollywood stories to share with you. There was enough star power on and off the stage at the Ahmanson that night to satisfy even the hungriest of celebrity-watchers.