Trending
You are at:Home»THEATRE»THEATRE: FRATERNITY
By Karen Salkin on October 10, 2012 · THEATRE

Not only was The Ebony Repertory Theatre’s production of Fraternity excellent, but the entire opening night experience was a winner. From the easy attached parking to the theatre itself to the play and performances to meeting my new favorite celebrity at the after-party, I couldn’t have asked for more.

Since this was my first time at this beautiful facility, I must begin with it. I was expecting yet another little Equity-waiver theatre, and was prepared for that. But this one seats almost four hundred guests! It’s beautiful and new-looking, with no bad sightline seats. We couldn’t have been comfortable in a theatre.

And there are big restrooms! No long lines at intermission. What a pleasure that was! And the lobby’s so big that they could put on another production right there. What a great place!

Next, it hit me pretty quickly that I’ve rarely seen such a well-dressed audience. That made the opening night feel as such, and I wish that every theatre-goer would follow suit. Please. (I’m talking to you, almost everyone who’s been to the Taper recently! 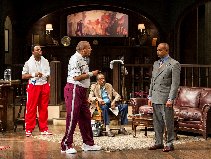 The set, designed by Edward E. Haynes, Jr. to portray a private men’s club in 1987, was perfect. It couldn’t have been better.

Now, here’s the deal with the play: it’s ostensibly about the politics of that time, a topic that, though so important, usually loses me. So, I missed a lot of what was happening in that area, so much so that I think I was rooting for the wrong candidate! (In my defense, I equated the race between the older gent incumbent and his younger protégé to All About Eve, a subject I’m much more familiar with. In cases like those, I’m always against the newbies.)

But it was really about the beginnings of the civil rights movement, as discussed and re-lived by seven black males, most of them with at least some semblance of friendship, and I just went with the humanity, and humor, of the situation. And those were great. We, the audience, laughed a lot, thought a lot, and definitely appreciated all the performances. All! That’s a rarity. The actors, indeed, held our attention. 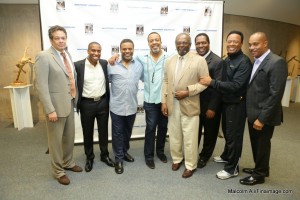 The all-male, seven-man cast is uber-accomplished. I was most familiar with Rocky Carroll. (I’ve never seen NCIS, the series he’s on, but we actually sat together at American Idol on Adam Lambert’s season, when it got down to the final three. So it was nice to finally see him work on-stage.)

I felt the most difficult task was assigned to Harvy Blanks as the reverend, who had to deliver two sermons; a gut-wrenching one in the first act, and a very humorous one in the second. He delivered them both with equal aplomb.

I loved that the story was unpredictable; I kept holding my breath, not knowing in which direction the action was going to go. (That’s why I’m not telling you more of the plot here; just take the journey with the characters.)

I often take notes during shows I’m reviewing. (Don’t worry–I don’t use even a pen light; I can write in the dark.) That way, I can remember just what I thought as it went along. But upon reviewing my notes for Fraternity, I realized that I just jotted down a bunch of the great lines, to share with Mr. X when I got home. (He’s crazy into politics.) There were so many memorable lines in this play; I just wish I could repeat them with the perfection that this cast did.

I hate that we never find-out which candidate wins, but that’s not the point of the play. And, on the one negative note, the show is a bit too long. I don’t know where it can be cut, but I’d say about ten minutes need to be shaved off it. [Note: It’s been around for over two decades, so I don’t think any trimming will be done at this point. I’m just saying.] 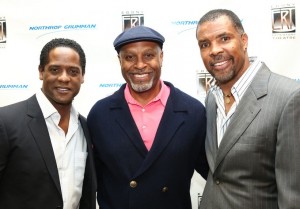 You all know I love an opening night that includes an after-party, and this one was right on-premises in the theatre’s adjacent ample party room. It was a catered affair; loved those meatballs! There were many celebs including Eriq La Salle, (of ER fame,) James Pickens (Grey’s Anatomy,) and Russell Hornsby from Grimm, (which I’m sheepish to say I watch; I just can’t help myself.)

So, every aspect of the evening was excellent. But the absolute highlight, for both my pal Vanessa and me, (yes, “me” is the correct usage; look it up if you don’t believe me,) was meeting Blair Underwood. I can’t tell you what a great guy he is!!! I had seen him on only two short-lived drama series (Dirty, Sexy, Money and The Event) so I saw him as an un-smiling grown-up. But, I’m here to tell you that he’s the most genuinely adorable guy ever! (Outside of Mr. X, of course. I mean that!) And, he looks about twenty years younger in person! He looks like a kid!

Blair couldn’t have been more charming and attentive. It was like talking to an old friend. (One I actually like.) And he did something so rare when we were leaving that I may actually have never seen this behavior before; he asked me to repeat my whole name! Who does that??? Can you see why we loved him?! Vanessa and I raved about him all the way home. (There will be more about him in my next Celeb Sightings column.)

Okay, so you may not get to eat meatballs and meet Blair Underwood, but seeing Fraternity should be a worthwhile experience for everyone.