Trending
You are at:Home»THEATRE»THEATRE: FIFTEEN MEN IN A SMOKE-FILLED ROOM
By Karen Salkin on December 5, 2019 · THEATRE

FIFTEEN MEN IN A SMOKE-FILLED ROOM

Not to brag, but there are very many categories I can run on Jeopardy.  But “US Presidents” is definitely not one of them.  So I especially enjoy learning about them when I can, and this very interesting play by Colin Speer Crowley afforded me one such opportunity.

Fifteen Men in a Smoke-Filled Room is about the presidential nomination of Warren G. Harding in 1920. All of the action takes place on the night of the nomination, with updates about the ensuing years given by radio notifications, done cleverly on-stage by having the “broadcaster” highlighted behind a transparent screen as he gives us the scoops. 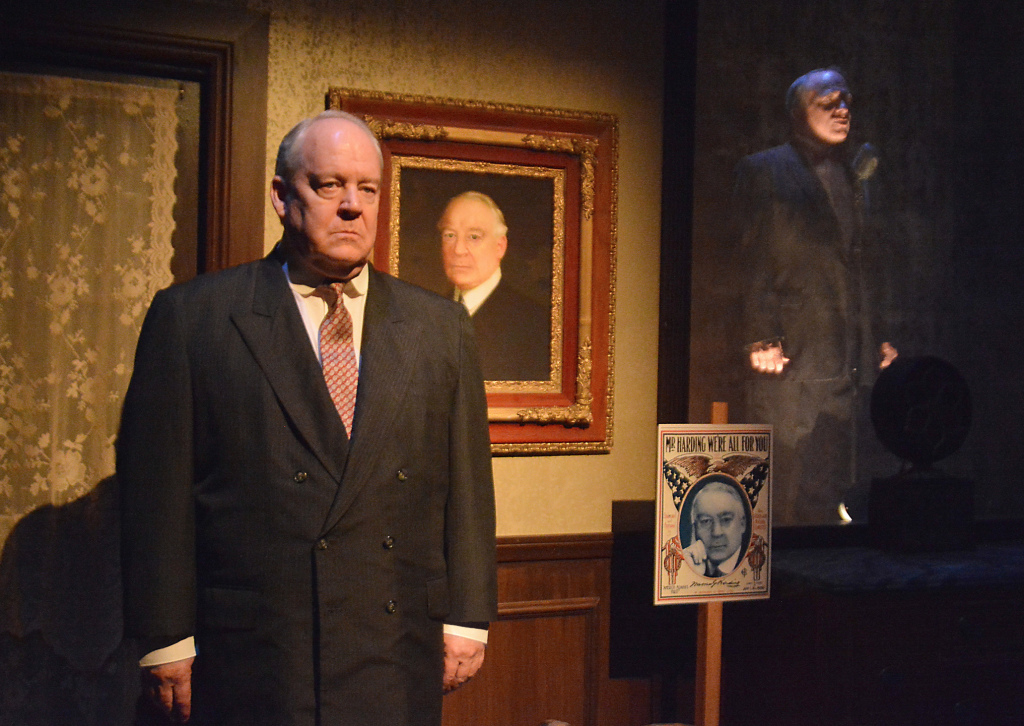 David Hunt Stafford and Roger K. Weiss (behind the screen.) Photo by Ed Krieger, as is the one at the top of this page.

I have to admit that the topic of politics has always bored me, but I was relieved to finally be learning about a different unpopular Republican Presidential nominee, even though the situation kept reminding me of the horrors this country has been enduring for the past few years.

The play is really short, at about only an hour and twenty minutes. I really appreciate when an entire scenario can be accomplished in a brief period of time like that. No more words were needed.

Speaking of words, this play is perhaps a tad too heavy with monologues. Even though my former TV show was one, I always prefer to hear dialogues. Yes, these monologues are within the context of conversations, and delivered superbly, but a bit more interaction between sentences would have better captured my interest.

As always, I had no idea what the show is about going in—I like to just go on the journey with each production. In this case, since political happenings are not my thing, when I realized Fifteen Men in a Smoke-Filled Room is about Warren G. Harding being nominated for President in 1920, I semi-tuned-out. But as soon as an extra-marital affair was brought into the narrative, I became all ears. (I have often admitted my shallowness in this e-zine, so don’t be surprised by which subject matter I prefer.) Actually, this time it was not just me–the energy of the whole show picked way up when newcomer-to-the-biz Sarah Walker showed-up as Harding’s mistress and baby mama. [Note: His paternity has never been proven, but is accepted as truth.] 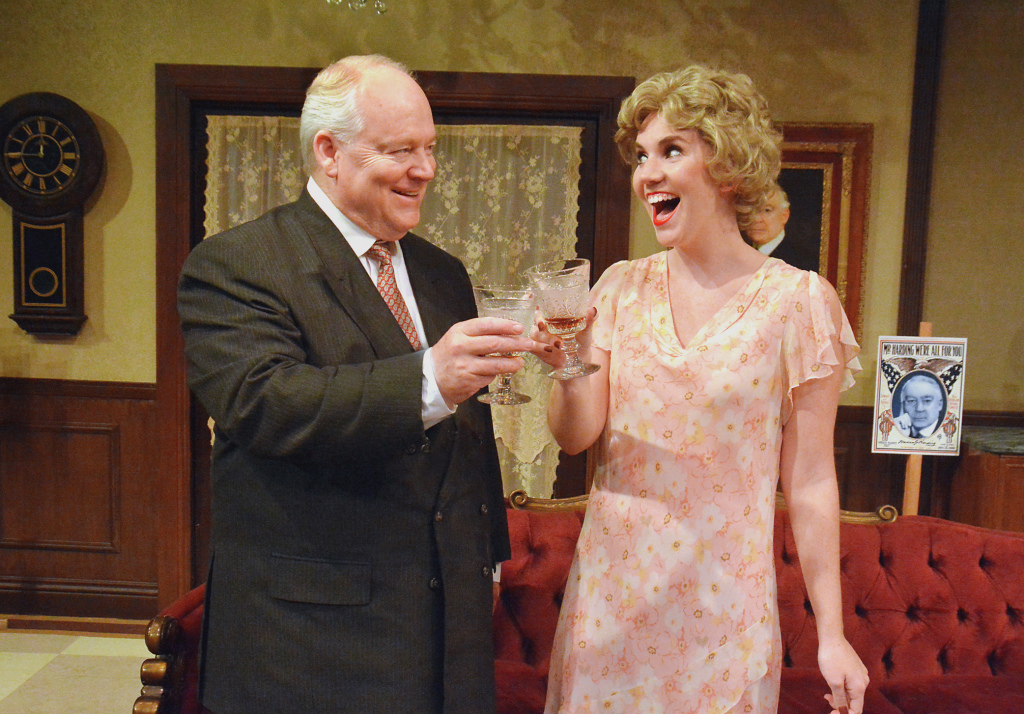 All six actors in this production do an admirable job, and are perfect for their roles. They make it feel like we’re watching a much bigger cast. (That is correct—there are only six actors. And only three, not fifteen, are men! And there’s no smoke, not even prop cigarettes, in the room, so no worries there. But a brief odorless cloud does waft up from the indicated convention floor at one point. You’ll just have to see the play to figure-out the significance of the title.) 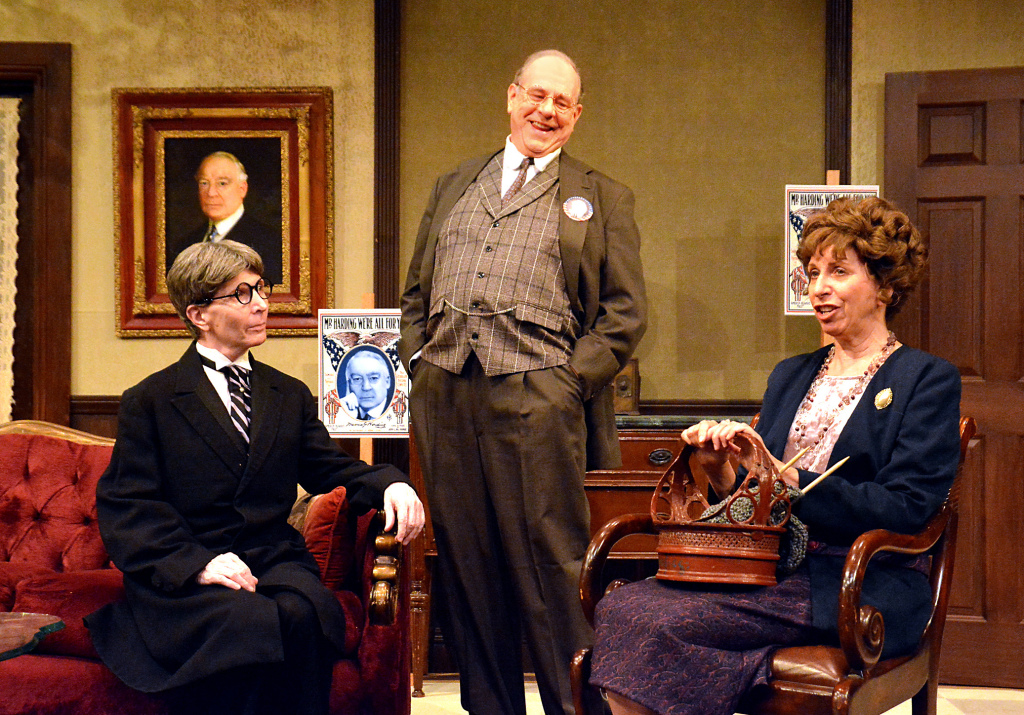 I have only one tiny complaint about this entire presentation, and that is with a bit of stage “business.” If the powers that be felt that knitting is an important action for the character of Mrs. Harding in a couple of scenes, Roslyn Cohn, (as excellent as she is in the role,) should have really learned how to do that craft before taking the stage! Knitters always work at a revved-up pace, no matter what else is happening in the room. When I saw the play, Roslyn barely did a stitch the entire time! She just sort-of held the needles and yarn still most of the time, and moved them around occasionally. Since that was the case, there seemed to be no need to have knitting be her busy work. I’m just sayin’. (One more nitpicky thing about her stage business is that she left the room with a purse and re-entered without it.) 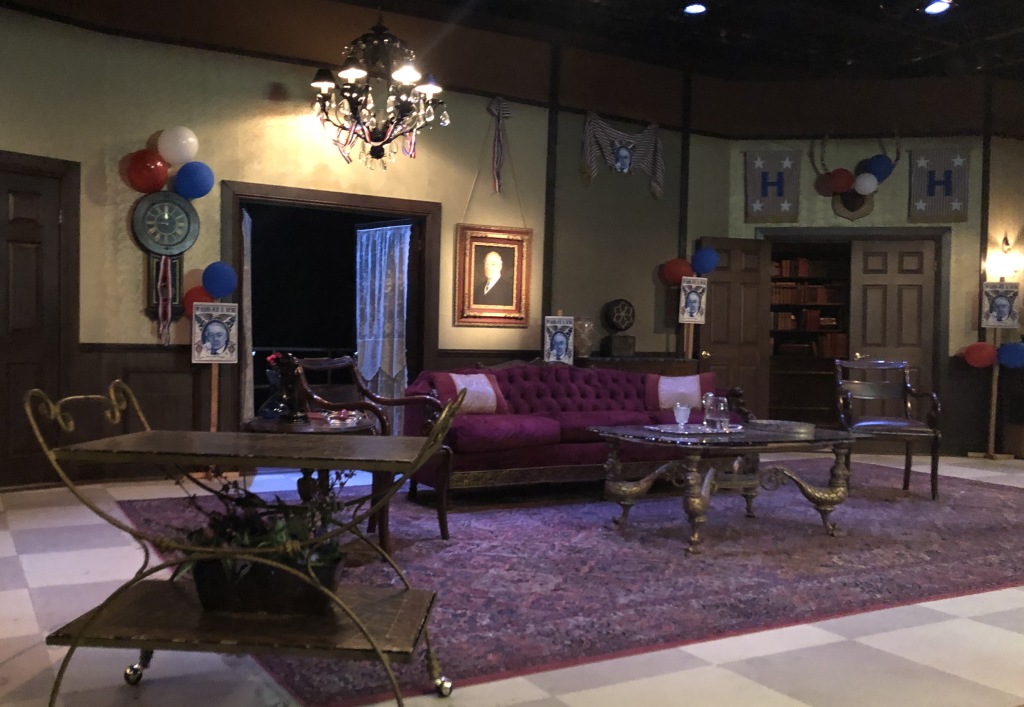 While I’m on the subject of creative arts, (which knitting is,) Fifteen Men in a Smoke-Filled Room featured yet another outstanding set by Jeff G. Rack. His designs always set every scene so beautifully, no matter the location or era. His work is one of the perks of seeing shows at Theatre 40. 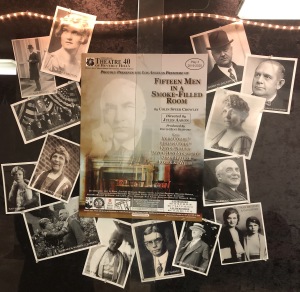 This company is also known for its ease of experience, along with little extras, and in this case, my friend and I were fascinated by the lobby display. It was filled with photos of all the real-life players, which were very educational. What a great idea that was!

On top of that, I had never been to Theatre 40 for a matinee before, so I was very pleasantly surprised to see such a packed house on a Sunday afternoon! But both the theatre and play deserve that respect.

I’ve never known even one thing about President Harding, but I researched him the second I got home. And when a play can inspire a thirst for knowledge, that’s a very good thing. So Jeopardy, bring on that “Warren G. Harding” category! I know I’ll run it now, thanks to Theatre 40.