Trending
You are at:Home»THEATRE»THEATRE: ETHEL MERMAN’S BROADWAY
By Karen Salkin on February 22, 2011 · THEATRE

I just realized this is a very limited engagement show, so I’m telling you up front that every student of musical theatre, and everyone who knows who Ethel Merman was, and every fan of an easy, entertaining evening must rush out and see it this week!

Here’s my background on it: when I attended opening night of Ballroom With A Twist recently, also at the historic El Portal Theatre, the show was almost starting when a woman needed to take her seat in the middle of my row. She was so nice about it–she didn’t want to make us move, and was trying to think of what to do. I insisted that it’s no big deal and made her go in, commenting to myself how rare it is to see someone that polite. 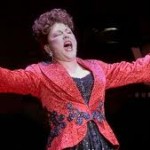 When the show began, they immediately introduced the star of their next production, sitting in the audience. It was that very same woman, Rita McKenzie, star of the upcoming one-woman show, Ethel Merman’s Broadway! She was playing a diva, but is far from acting like one in real life–how refreshing.

So, I knew this show had to be good, especially by the number of fans surrounding her at the opening night party for the former show. I looked forward to seeing her perform, and was not disappointed. I was so shocked that this tiny, pretty lady could transform herself into the larger-than-life, in every way, Ethel Merman! And her singing voice was spot-on! It knocked my socks off. She totally channeled La Merm. (Someone told me later that when Rita sings like herself, she sounds akin to Melissa Manchester.)

I usually hate one-person shows–I just can’t sit still for them. But this didn’t have that feel at all. There was so much going on, in addition to Ms. McKenzie’s amazing renditions of Ms. Merman’s show stoppers. (If I closed my eyes, I could hear all my parents’ old show tune albums.)

The glue in-between musical numbers was the personal Ethel Merman stories, of her career, love life, family. There was a big screen behind her the whole time that had exactly the appropriate number of slides, as visual aids to her yarns. There was even a cameo appearance by a standard poodle. Granted, this dog was no Clarence, especially in the singing department, (she didn’t even sing in this, a musical show!,) but even I loved seeing her.

Aside from the vocals as the obvious highlight of the show, I really enjoyed all the fun costumes. I assumed that Rita would wear one per act, but I was way wrong. She changed, with ease, for almost every number, courtesy of Eric Winterling, who also created the costumes for Wicked. Some of his touches were brilliant, even to my modern fashion sensibility. My favorite was how she made her cocktail dress into a hostess outfit, but you’ll have to see it for yourself.

Here’s an interesting (to me, anyway) long side note: I saw Ethel Merman’s Broadway just two nights after seeing Rock Of Ages last week. While I enjoyed them both, the juxtaposition boggled my mind–they were like night and day.

Besides the obvious differences–one person and a 7-man orchestra, as opposed to about 25 actors and a 4-man rock band, also, coincidentally on-stage–the best difference to me was that we could make-out ever single word of the Ethel Merman songs!!! That’s a feat I could not accomplish at the rock show. The only two things they had in common were talent and iconic songs, though of wholly different genres. And I guess that’s all they each needed to be a success.

A big bonus of being part of the opening night El Portal audience was getting to see the wonderful hostess of the show that night–Mitzi Gaynor! (For those of you who either aren’t old enough to know of her, or don’t watch old movies, like I do as much as possible, that’s what Google is for.) I was just watching her 1958 classic, South Pacific, with my mother, by phone. And, shockingly, she looks just the same! I guess not exactly, but pretty close. She was rocking a short skirt, fabulous turquoise jewelry, an ankle bracelet, and classic French-manicured nails. And telling some randy tales, to boot. We should all be like Mitzi at her age.

And, in case you missed it in my previous reviews of this actual theatre, I absolutely love it! It’s the most comfortable theatre, on every level. If I ever get around to doing my one-woman show (don’t worry–no singing on my part!,) that I’ve been promising to do since the second year of my TV show, this would be the place. The audience is close enough to be intimate, but far enough away to still feel like you’re on stage, if you’re the performer. I even love the lobby!

The opening night party was once again at the new Federal bar across the street, only now they’re open for business, so the whole shindig was in the back. It’s a perfect party venue.

And it was a who’s who of old school celebs, who’ve all been around since before the current crop of young nobodies (like reality stars,) were even born. That’s staying power! I saw my old pal, Richard Sherman, (who wrote most of the old-time Disney classics, such as Mary Poppins and It’s a Small World,) Doris Roberts, Hal Linden, Earl Holliman, (who was on Police Woman with my good friend Angie Dickinson back in the day,) Renee Taylor, Joe Bologna, Jane Withers,  Mary Jo Catlett, George Chakiris, Tippi Hedren, and the still-more-beautiful-than-anyone Stefanie Powers. (She’s pictured at left, with George Chakiris.) I got to finally tell her that her cute mother used to call me after many of my telecasts to discuss my wardrobe! She was very gracious about my sharing that story with her, which is exactly how I pictured her to be.

But even without the extras of a party and show business folk, seeing Rita McKenzie as Ethel Merman is a delightful way to spend an evening. And you better catch her before Broadway scoops her up, which I can see happening any time now.