Trending
You are at:Home»THEATRE»THEATRE: ELEVATOR
By Karen Salkin on April 4, 2017 · THEATRE

This is perhaps the perfect play! Elevator is definitely the best one I can remember seeing at a smaller theatre in LA. It’s extremely funny, touching at times, short enough, has wonderful defined casting, and thank goodness, there’s none of the pushing type of acting that seems to be the hallmark of ninety-nine seat (and under) theatres. For the first time ever, I could actually see it again! [Note: Before the show began, I heard a girl telling someone this was her second time seeing it, and that she’ll be back again. I thought, “She must be a friend of a cast member because who sees a play twice, let alone one at a little theatre?!” Five minuets into the show, I understood the repeat viewings.] 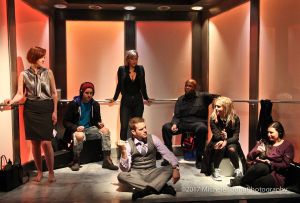 Photo by Michele Young, as is the big one at the top of the page.

I don’t want to tell you too much, because you just have to experience every second of it for yourselves, (and I suggest not bringing a pal who keeps trying to guess what’s going to happen, as mine did—OMG!,) but I will tell you that the action takes place in—guess where?–an elevator! Duh. (And duh to my duh!) [Note: The Coast Playhouse is undergoing renovations right now, so I thought that all the plastic covering and exposed wood on the weird interior path to the actual theatre was perhaps part of the show. It’s not. I don’t think. Actually, I’m still not sure!]

Elevator had a previous run in LA, seven years ago, and shockingly, even though I was already reviewing plays for many years at that point, I had never heard of it! I know—how is that even possible?! Perhaps even more surprising is that several of the cast members from that run are back in it now. That says to me that the play is as much fun to be in as it is to see it!

Seriously, it’s a joy! I don’t have too much to say about it because I so don’t want to ruin it for you. There’s surprise after surprise. I honestly don’t know how writer/director Michael Leoni came up with it all; there are so many clever and creative touches in such a brief time. There’s even a small section like Stomp!

I’m extremely claustrophobic, so I was worried that the show would be hard to watch, but the on-stage elevator depiction is great. It’s big enough for them to move around in, but small enough to feel their pain, without it intruding into our own psyches. And it’s flared-out at the sides, to make it easier for the audience’s viewing pleasure.

There’s excellent music, both before the play even begins, (which sets the tone,) and throughout. Some of it is even live. And the live numbers are fabulous!

It’s sort-of fun for the audience members to try to figure-out which of the seven characters they are each most akin to, both on the surface and underneath. I hadn’t realized I was doing that myself during the show; it hit me after. But it just seems like a natural thing to do with this scenario. The funny thing is that I am like none of them. Fans of my former show, Karen’s Restaurant Revue, know that if I was stuck in an elevator with six other people for a few hours, we would not know the stories of any of their lives because—I would have done a monologue for the entire time!!! (And you know I’m not really kidding about that: “It all started back in a little house in Brooklyn…”) 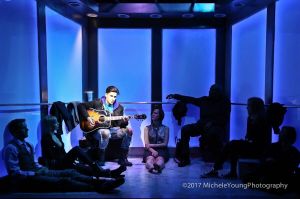 The whole cast is truly excellent, with nary a weak actor in the bunch. But, on a very, very shallow note, I was happy to see such a cute guy in there. That always makes a show better for me. [Note: Actually, the entire cast is attractive. It’s just that Devon Werkheiser is cute and young. And can sing and play guitar! Who wouldn’t like him? (Except for another cute, young guy who can do the same things, but didn’t get the part in the play.)]

So, I loved the writing, directing, casting, acting, wardrobe, and even the very-basic-yet-creative set. I have only two teensy tiny complaints: The first is that the floor in front of the elevator should not be so shiny. Yes, it does depict the floor of an office building, but seeing the mirror images of the actors the whole time is pretty distracting. For once, I was glad that some heads in the seats in front of me were blocking much of that view. And the other is that a few of the actors came very close to putting a hand or foot over the line of the demarcation of the elevator, which took me out of the action several times. (They may even do it on purpose, to make us squirm just a little bit more.) But that is it for even the slightest bit of negativity.

So, Angelenos and visitors to our fair city, before you do any other social events here, run right out and see Elevator at the Coast Playhouse. Just don’t get stuck in one on your rush to get there!