Trending
You are at:Home»THEATRE»THEATRE: DR. DU BOIS AND MISS OVINGTON
By Karen Salkin on April 26, 2017 · THEATRE

There’s so much to say about this worthwhile Robey Theatre Company play that just opened at LATC in downtown LA this past week-end. It takes place in 1915, five years after the beginning of the NAACP, (National Association for the Advancement of Colored People,) and is based on two of the founders of that organization. 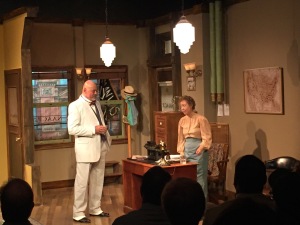 Dr. Du Bois and Miss Ovington depicts a fictional conversation between Dr. W.E.B. Du Bois, who was a black* man, and Mary White Ovington, a white woman, who are both at the forefront of trying to “advance colored people,” as the NAACP’s title states. The topic is fascinating to me—I had no idea that there were more white people who founded that organization than black ones! That was a positive revelation for me–that some white people actually cared about the plight of the oppressed so early on. [*Note: I never know the correct term for people of color these days. I don’t love “African-American” because that pertains to just Americans and leaves out black people from other countries. Most people of color I’ve consulted with tell me to stop worrying about it and just use “black,” as I do “white,” so that’s what I’m doing in this piece.]

There’s so much to say on this entire subject; I went home and researched these two under-written-about visionaries, the NAACP itself, and even Frederick Douglass, (who is briefly mentioned in the show,) for hours! I even looked into Rachel Dolezal, who is a whole confusing topic unto herself. (You can do that one for yourself; my feelings on her are totally mixed.) 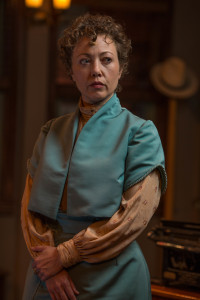 Melanie Cruz. Photo by Matthew Leland, as is the big one at the top of the page.

As a white woman myself, who was brought up in large part by a black woman, (who was my best friend and biggest childhood and teen-age influence,) and who had a long-term black boyfriend, (whose family I’m still closer to than my own,) and just a human being, race relations have always been very important to me, so I was especially interested in this play by Clare Coss. I knew it had been very well-received when it was done in New York a few years ago. Especially in light of one of the wonderful lines in the script, “White indifference is the crime of crimes,” I was happy to find-out that there were at least several white people who did the right thing over a century ago.

The play is also about female oppression. (At one point May asks Du Bois to answer something before she does, telling him it’s because he’s the male in the relationship!) The entire dialogue is so relevant today. We’ve come such a long way in this past century, but it’s far from enough. And now with Orange Hitler helming our country, I’m worried that we’re going in all the wrong directions. So a theatre piece such as this is especially pertinent nowadays.

As to this actual production of it, I’m grateful that this company has brought it to an LA audience, but it lacks a bit of power. And it’s way too slow. On opening night, it got cooking after about a half hour, but then slowed down again pretty soon. I think that was all due mainly to it being a super-wordy script, and also to it being opening night, so Ben Guillory, as Du Bois, was not quite secure with the dialogue yet. He’s an excellent actor who was doing double duty as the director, so perhaps he had a lot on his mind. 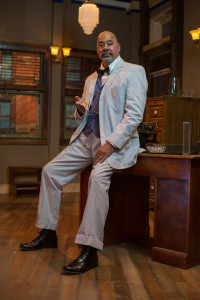 Since Dr. Du Bois and Miss Ovington is really just one long conversation, staging it presents a tricky situation. The choices in this production make it seem like the two actors didn’t really know what to do with themselves. What the play has to say is so interesting and important that perhaps they should have done it as a staged reading instead, so that the audience would be able concentrate on their words, rather than their lack of movement.

And, towards the end, there were a few weird lighting changes. I’m not sure what they were going for, but, whatever it was, it should have been made clearer.

My last tiny complaint is that the program should let us know the time and place of what we’re about to see. If I had not studied the topic a bit beforehand, I would have been a bit confused.

But back to the positives. Melanie Cruz, as Miss Ovington, sounds just like the old classic movie actresses, which is a major compliment from me—I love those voices and speech! I’ve always wished I could speak just like Gene Tierney, who had the greatest way of talking ever! So, Melanie is perfect for this role. 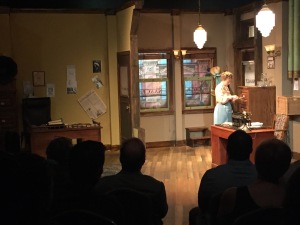 I also admired the cute, thoughtfully-designed set, by Thomas Meleck, which is perfect for such a small space. It totally conveys the scene. I adored the old typewriter, telephone, dictaphone, and other props, (chosen by Jasmine-Joy Singleton,) which are things of the past. Too bad that racism is not!

The play opens well with brief back-and-forth monologues; they help set the atmosphere of the time period, and make use of the sides of the stage.

I perked-up when Du Bois made a brief reference to Rocky Point in Rhode Island. I used to live in Providence, and that now-departed amusement park is one of the first venues I visited in that state with my then-boyfriend (whom I mentioned above,) Omar. This play about a man and woman of different races, who are attracted to each other, reminded me of an amusing experience we had there, based on that we were an inter-racial couple, which we really didn’t think about much. We both ordered cones that day—his vanilla, mine chocolate. When the guy went to hand them to us, he asked who gets which. When I kiddingly answered, “Isn’t it obvious?,” (meaning I like chocolate and Omar likes vanilla,) he didn’t know what to do, but Omar and I got a big chuckle out of it.

The biggest positive of all is that Dr. Du Bois and Miss Ovington inspires thought and reflection. And when an evening of theatre can encourage you to look into an age-old universal problem, and hopefully add your voice to the solution, that’s time well-spent.