Trending
You are at:Home»THEATRE»THEATRE: DISNEY’S WINNIE THE POOH: THE NEW MUSICAL STAGE ADAPTATION
By Karen Salkin on December 2, 2022 · THEATRE

Attention all Winnie the Pooh lovers, no matter your age: This show is wonderful! And it’s just what I expected because I had the recent pleasure of chatting with Jonathan Rockefeller, the creator and director of it, and he told me, “It’s all about joy; we’re here to create joy.” That’s exactly what he and his team did with Disney’s Winnie the Pooh: The New Musical Stage Adaptation.

There’s so much to say about this production, and I promise to get to it all. In case you couldn’t tell by my many Winnie and gang pix in this e-zine over the years, (including an adorable one in my recent Thanksgiving column,) I’m in love with Winnie and especially Piglet, and absolutely everything about that entire crew. (Christopher Robin I could live without, though, because he’s living my life!) 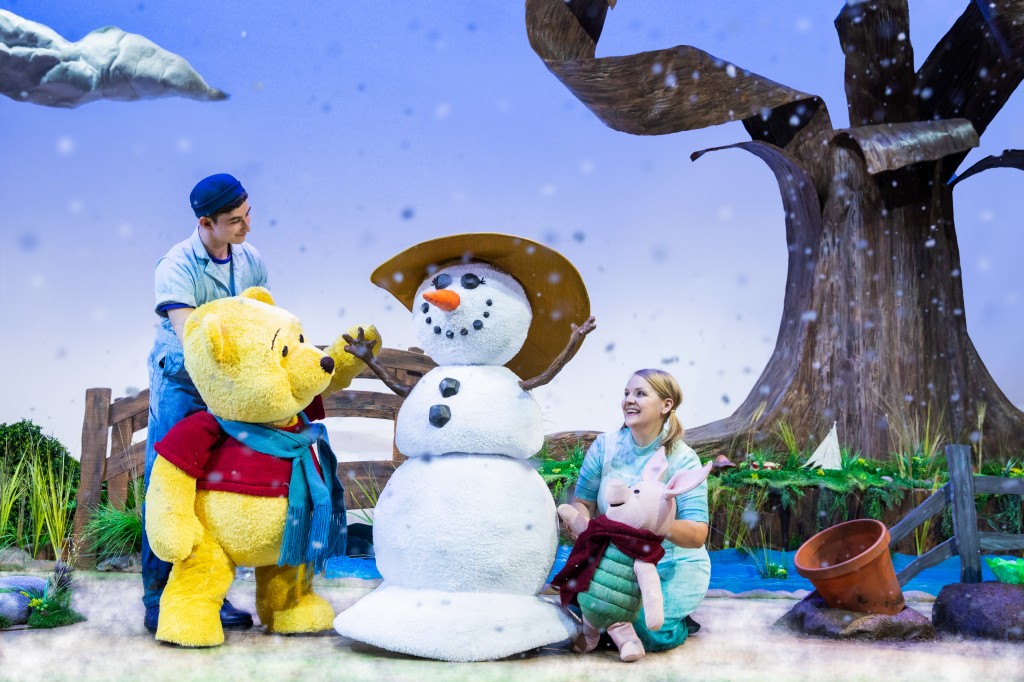 Photo courtesy of Rockefeller Productions, as is the one at the top of this review, (with different puppeteers than the ones at the Douglas.)

When I told Mr. X that I’m going to the opening night of this Winnie the Pooh show, he asked me where it was, which I found strange because he’s never asked that. Then, while I was gathering myself to answer, he continued, “Hundred Acre Wood?” I’m so proud of him for knowing that’s where Winnie lives!!!

But, in actuality, it’s at the Kirk Douglas Theatre in Culver City. After a three-year pandemic-induced hiatus from that very easy-going venue, it was great to be back there. But, let’s face it, I would have gone anywhere to see this show!

I was so excited about seeing Winnie and the gang, especially in such an intimate theatre, that I chose to speak with Jonathan, a man after my own heart, before I even saw the show, because I just knew that I’d be a blubbering, mascara-dripping mess after it. And how right I was. I had to hold myself back from running the few steps to the on-the-floor stage to hug Piglet and Pooh!!! OMG! They are soooo adorable!

This Winnie the Pooh features life-size puppets of the characters with talented puppeteers doing all the work. (But, of course, I had eyes for only the animals, who are real to me.) The humans are all so good, in fact, that I’m going to laud the entire cast we saw here, (they change from city to city,) which I don’t think I’ve ever done before!: Coldin Grundmeyer, Josh Bernaski, Luke Dombroski, Melissa Xiaolan Warren, Blake Rushing, Eshan Lyall, and Hannah Lauren Wilson as Piglet, whose voice Lula said is “impressive.” Those actors work so hard that I imagine they must lose ten pounds a show! (Hmmm—maybe I should take-up puppeteering!) 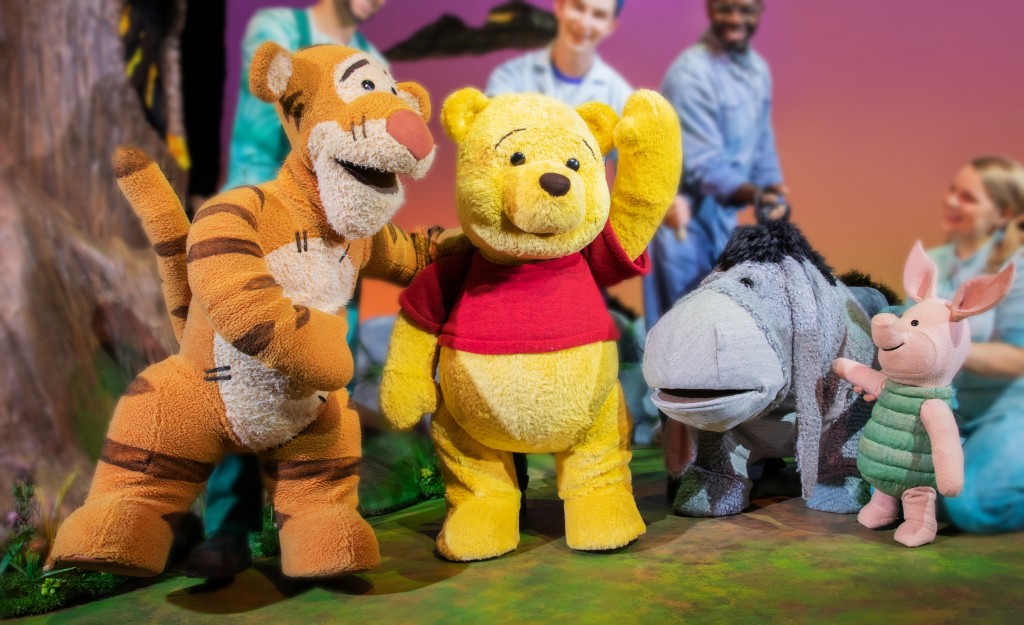 I’m someone who is easily distracted, but I was able to mostly concentrate on the characters themselves, as opposed to the humans behind them. My friend Laura, (who joined me with her nine-year-old daughter, and my Junior Reviewer, Lula,) elaborated on that by saying, “When you see giant puppets like that, you can’t help but notice the actors. And this is a good blend of puppets and performers because the actors’ faces really convey what the characters are feeling and showing.”

The whole very happy show is absolutely charming; we all loved it, as did the entire opening night assemblage, including audience members who were there without children! And it was really fun to hear the reactions of the kids in attendance; that made me laugh even more.

It might help to be at least a little familiar with Winnie and company before you go, but this show is also a really perfect introduction to them. Even with my knowing soooo much about these characters, I had forgotten what a riot Eeyore is and just how much energy Tigger has.

It’s also lovely that all seats in the Douglas are good for this production. The stage is actually just flat on the floor, which makes the front row the best in some ways. None of the three of us like sitting too close-up, but we all really enjoyed being this close to Winnie and friends. That proximity to the colorful set, (which young Lula noted is “great!,”) made it extra spectacular. 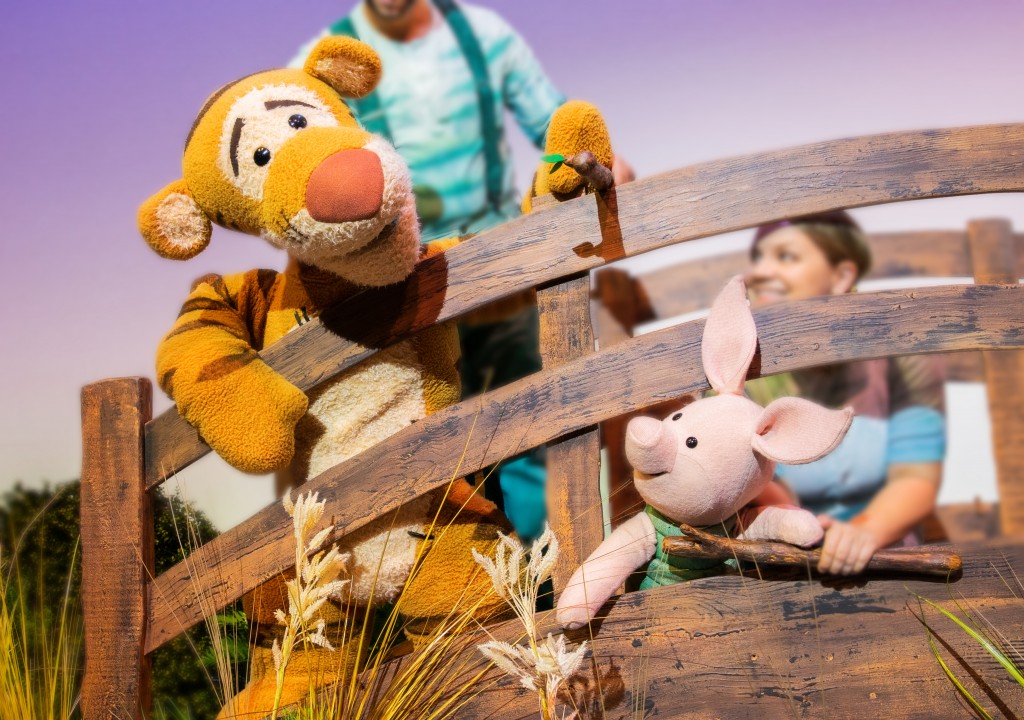 Lula advises to keep your eyes on a contest with sticks between Piglet and Tigger about halfway through. We all enjoyed that little bit. And she also says the “jokes are very understandable for kids,” which is really important, in my book.

I found myself laughing and smiling the whole time. Until the end, that is, when, of course, I got all choked-up from the happiness of it all.

The show features a few songs culled from the Disney Winnie the Pooh films, all by the prolific Disney composers, the Sherman Brothers. I’ve been fortunate enough to be friends with Richard Sherman for a long time, and every time I see him, I can’t stop singing their It’s a Small World for weeks afterwards. And now that I’ve seen Disney’s Winnie the Pooh: The New Musical Stage Adaptation, the same thing is happening with their iconic Winnie the Pooh theme song, (even though it’s not in this production.) But that’s actually a fun thing.

And, at just an hour long, the show is perfect for little ones. (Just please remind them to not kick the seat in front of them the whole time, as the adorable toddler behind me did!)

You can add a Meet and Greet with some of the cast and characters onto your tickets. We did that, and Lula got to ask them some good questions, including how heavy the puppets are, (Winnie is forty pounds!,) and how the actors decided the characters’ voices, which they said they did by watching the Disney shows over and over. 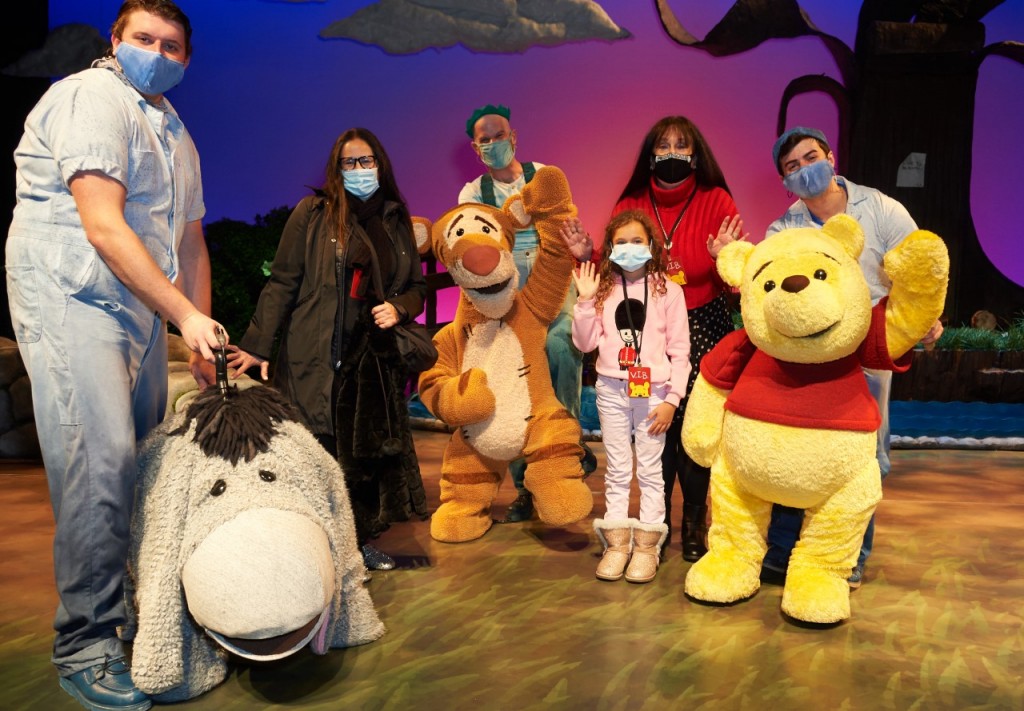 To let you guys in on my convo with the creator/director I mentioned earlier, Jonathan Rockefeller, (who’s from Australia but lives in New York now, and, by the end of our phone call, had won the coveted title of My New Best Friend,) I first had to tell him my most shameful-but-honest personal Winnie The Pooh story, which I’ll also share with you at the end of the review.

And then since, as the title of this e-zine states, It’s Not About Me, I asked how he had become as Winnie-obsessed as I am, and he told me that he grew up watching the 1980s cartoons on Aussie TV, which then got him interested in the actual books. He said, “Winnie the Pooh is so imbued in our culture–he’s been around for ninety-five years! The character transcends generations.” 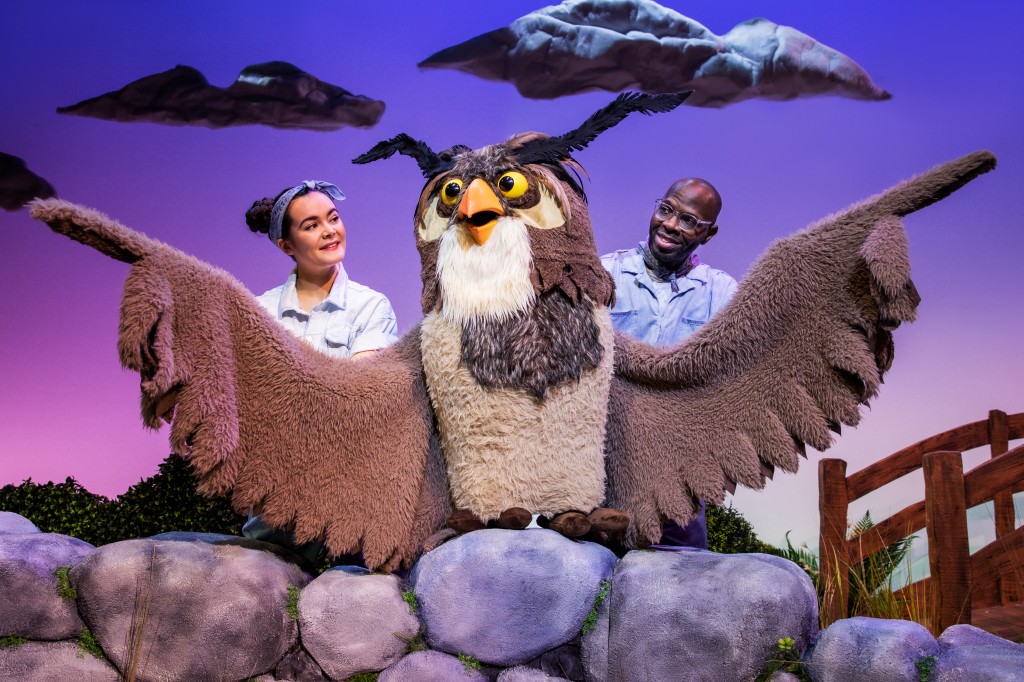 Later on, Jonathan expressed that “we care about the audience; we want to make sure they have an authentic and wonderful experience. We love to educate,” noting that his show is “for adults, as well.”

I told him that Piglet is my fave and he said that Winnie is his. He said he identifies with him because, as Pooh does, he himself is “surrounded by a little bit of chaos,” and tries to “make sense of the world around me.”

Actually, there’s only one thing Jonathan and I disagree on! I asked why the Piglet in the show is wearing a green onesie, as opposed to the popular pink one, and he said the green is straight out of the original A. A. Milne books. So, as a former teacher, I can’t really fault him for that. 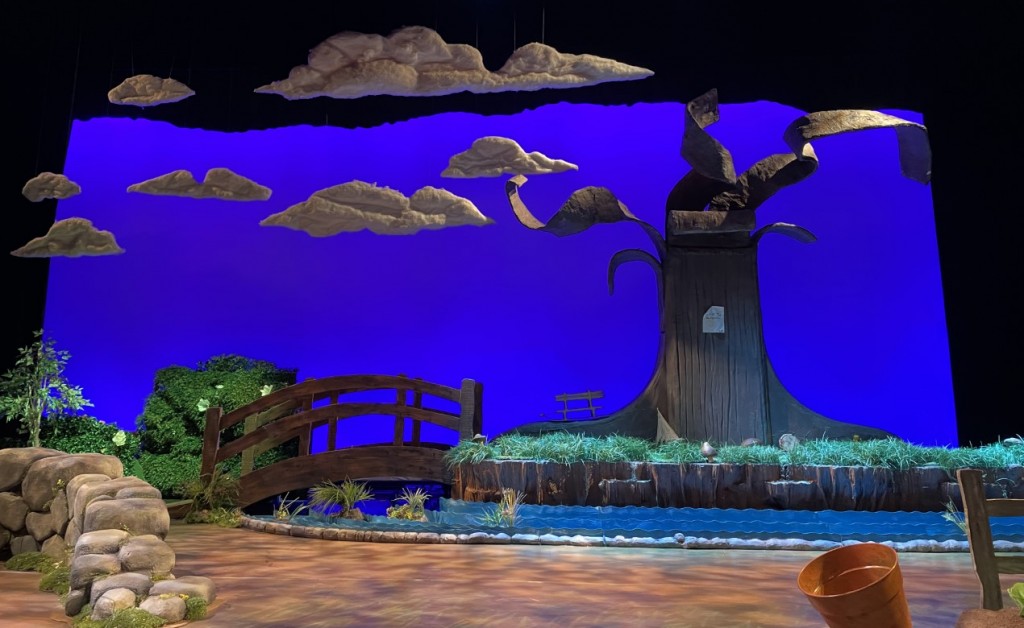 Just part of the set, pre-show. Photo by Karen Salkin.

And happily for all my readers not just here in Los Angeles, (for whom it’s the perfect holiday entertainment,) but around the country, and even the UK, you will all get your chance to see it in 2023!

Now, here are just a couple of good suggestions from me: When you go to Disney’s Winnie the Pooh: The New Musical Stage Adaptation, no matter where, dress up! Either in festive attire or wear any Winnie items you have. (Mine was all underwear and socks, so I wore a short red sweater to be in sync with Pooh Bear himself!) And bring your own Winnies. I saw even grown ladies carrying their plushies, and looking very happy to do so.

But my very best suggestion is—do not miss this show!

Okay, here’s my shameful-but-fun personal Winnie story: Mr. X knows how much I love Winnie and friends, of course, and he’s always given me a zillion Christmas presents. 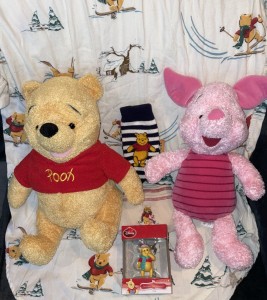 Just a few of my Winnie the Pooh gifts from Mr. X. (And Clarence!) Photo by Karen Salkin.

Both of us also gave Clarence, our late precious toy poodle, many gifts. So one Christmas, at the end of the gift-opening, Mr. X gave Clarence one last present, which I opened for him, of course, and there was…an adorable little stuffed Piglet! I almost fainted–he gave Piglet to Clarence instead of to me?! And that particular year, he gave me a lot of grown-up gifts, such as sterling silver serving utensils from Neiman. I’m ashamed to admit this, but I kept harping on that topic and letting him know just how upset I was over the Piglet debacle. (But no worries–Clarence re-gifted it to me right away.)

So the next Christmas, just about every gift I opened–ornaments, stuffed animals, cookie jar, little cutlery items, socks, salt and pepper shakers, birthday party teapot, flannel nightshirt, even underwear–was all Winnie the Pooh and friends! And let me tell you, as funny as it was, I was thrilled! I still have it all. Of course!

And now I added to that collection with a plush toy from the concession stand in the lobby of this production. But you’ll just have to guess for yourselves which character I chose. Here’s a hint: I wanted them all!!!