Trending
You are at:Home»THEATRE»THEATRE: DANGEROUS BEAUTY
By Karen Salkin on March 7, 2011 · THEATRE

I unfortunately had to miss the Dangerous Beauty opening several weeks ago because of my overbooked life. (What else is new?) But I was so happy to see the Pasadena Playhouse back in action this year that I had to go see the show this past week-end, with just one week left on its extension. I’m recommending that you do the same.

Seeing a big musical production in this semi-intimate setting (for a bigger theater, if you can picture what I mean,) is a treat, no matter what the show. But, for some reason, this one seemed even more special to me. Perhaps it was the great sets or colorful costumes. Or the bopping head of the conductor. I can’t quite put my finger on it.

Or perhaps it was because, since I was in the audience on just a regular night, (as opposed to the opening, when I know a quarter of the people there,) I got to concentrate more on the actual show. Whatever it was, I was glued to the action on the stage. 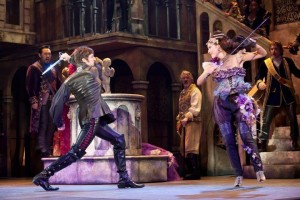 Dangerous Beauty is a fictional account of a real-life sixteenth-century Venetian courtesan, which was the term for “high-priced call girl” way back in the day. First it was a non-fiction book, then a 1998 movie, and now a musical. I had never read the book nor seen the movie (I believe no one did, actually,) so I went in blind, which is the way I like to approach any story, and enjoyed it immensely. 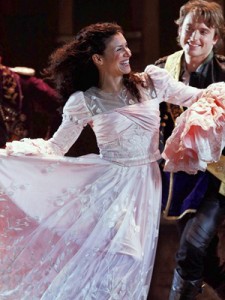 The evening made me realize that I watch way too much television, though, because as each actor came on stage, I thought to myself, “Oh–she/he looks like [blank.]” In order of appearance, I made comparisons to Julianna Margulies, Carol Kane, John Schneider/Patrick Cassidy, and Jane Lynch! It was crazy!

The quick review is that everyone was talented, the set by Tom Buderwitz worked on every level, we could understand the lyrics of the many songs, the play itself was equal parts comedy and pain, and Soyon An’s costumes were colorful, and sexy when necessary. Those of the back-up girls were infinitely clever. They captured my attention the first time they were moved around by the actresses, who went from courtesans to respectable townswomen with just three quick on-stage adjustments! Very impressive.

Even though the musical portion of his role wasn’t that big, I really enjoyed hearing Michael Rupert sing again, no matter how briefly. He originated the role of the professor in one of my all-time favorite shows, Legally Blonde, and I absolutely love the quality of his voice. (More mature L.A. audiences probably know him as the star of March of the Falsettos back in the ’80s, which I understand was an iconic role.)

On a possibly-shallow note, I’m so jealous of the perfectly-toned arms of Jenny Powers, who stars as Veronica. The girl is pretty and can definitely sing and act, but it’s her arm muscles I couldn’t take my eyes off, wondering just how many years I would have to work to win-up with biceps like that. You go, girl!

I have only one small complaint about the show. I didn’t mind all the sexual references, or even the one bedroom scene, because that’s the whole topic of the show. Well, that, and the crazy life that females back then had to lead, especially brainy ones. But I do think that many would be offended by one too-graphic song about sex. I even cringed, and was hoping that there were no kids in the audience, which had not even occurred to me prior to hearing it. (The mother sings it, and I believe it’s the third one in, if you want to look out for it.) 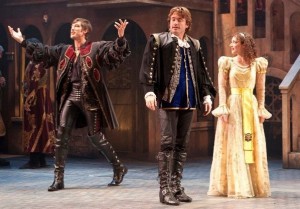 Other than that one tiny note, Dangerous Beauty was admirable. There was a line I loved and made note of: “God made sin so that we may know his mercy.” Amen to that brother! It made me feel a whole lot better about my life, I’ll tell ya!

Actually, shows like this make me feel better about my life in general because, even though it’s fictionalized, I’m always amazed by just how hard women have had it forever, until now. We ladies take our lives for granted nowadays, I think, and stories like this remind me to be even more grateful than I really am. I could not imagine having to sleep with strange men, especially ones with hairy backs and beards, (as I imagine many of them looked back then,) just to gain access to a library! (Courtesans were allowed to study, while regular women were not. It’s a fascinating topic–Google it.)

So, whether you’re into the history of it or just want to see an excellent new musical, or even just love walking into the Pasadena Playhouse with all its own history, Dangerous Beauty will be here for just one more week, so I suggest you make it a destination.