Trending
You are at:Home»THEATRE»THEATRE: CRIME AND PUNISHMENT
By Karen Salkin on April 30, 2019 · THEATRE

How often do I get to include Dostoyevsky’s Crime and Punishment and The CW’s Roswell, New Mexico in the same sentence??? (This is the first, and I’m sure only, time, of course.)

And just what do they have in common, you might ask? (And should.) Cute actor Michael Trevino. (Come on now, do you think I would review a downer like this story without an attractive guy to look at?) I give him tons of props for doing this stage version of the classic novel, Crime and Punishment, at this point in his career; if I was starring on a TV show, I would not want to spend my hiatus doing something this heavy. I actually wouldn’t want to do it under any circumstances! But that’s just me. 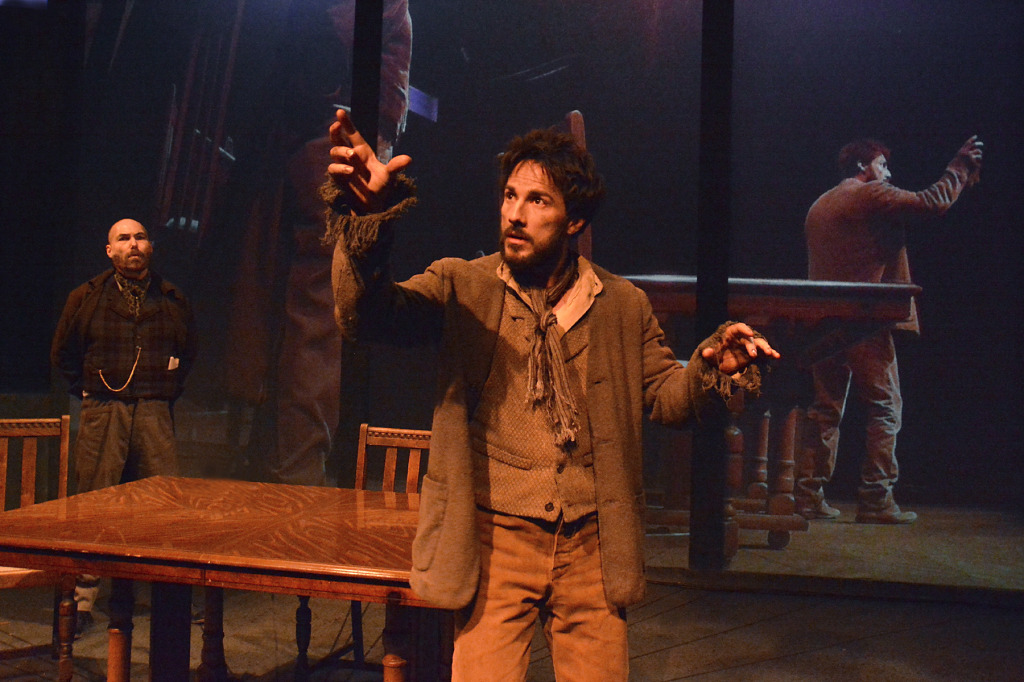 Brian Wallace and Michael Trevino. Photo by Ed Krieger, as is the one at the top of this page. (And for the record, the actual presentation is far from as colorful as these pix; it’s mainly just gray and ecru, even their faces!)

Just in case I’m the only person who watches Roswell, New Mexico, (like they needed to add the state to that title, right?,) it’s basically a show about good-looking aliens in their late twenties. And the humans who love them, of course. (It is on The CW!) And Michael plays a doctor on it, who loved the smart girl in high school, and now she loves someone else. (Again—CW.) And at the after-party for Crime and Punishment, he told me that the series got renewed for next year. So, yay to that.

Now let’s get to what I thought of this play that’s currently running at the Edgemar Center in Santa Monica. There’s a reason I never read the book—it’s way too depressing.  And long.  Five hundred forty-five pages long, to be exact! Even with my 147IQ, there’s no way I could ever get through it.

So I thank Working Barn Productions for finally filling this gap in my literary education. And for making it sort-of the CliffsNotes version of Crime and Punishment. I give the play’s adapters, Marilyn Campbell and Curt Columbus, a lot of credit for this hour and a half uber-condensed presentation of the saga because I couldn’t even unravel the characters on the novel’s Wikipedia page in just ninety minutes!!! They cut an incredibly complicated roster of over twenty-two characters down to just seven. 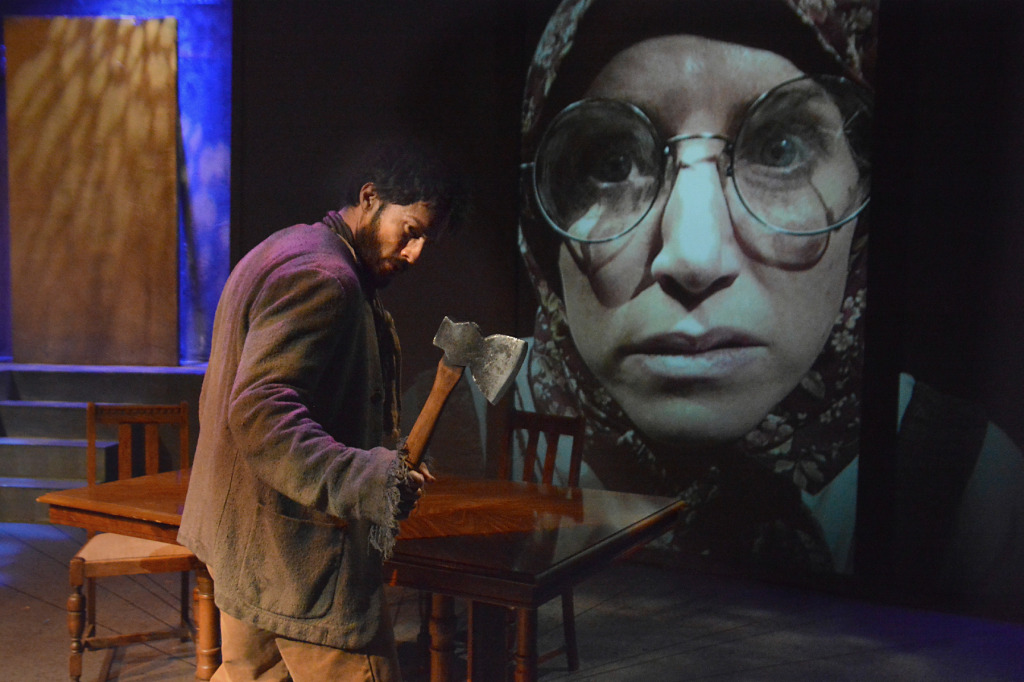 But that means that this brief adaptation shed no light on the tale for me, although it is an interesting enough character study. What they narrowed the entire narrative down to is akin to saying Gone With The Wind is the story of a selfish girl who never goes hungry. But it does work on some levels, especially for people who have read the book or seen any of the dozen of old film versions of Crime and Punishment. I think it would definitely help to know the scenario going in. I did not, and I was really lost. I had no idea what was going on for at least half of the show, especially because the production seemed to begin in the middle of the tragedy. (And I was correct about that.)

But I do appreciate that they made this play much less complicated than it could have been by having it all be acted by just three actors, even though two of them play multiple characters.  (Good thing that period of history and location of very old school Russia were not colorful ones, so there are no big costume changes required. A different shawl or head scarf pretty much does the trick.) 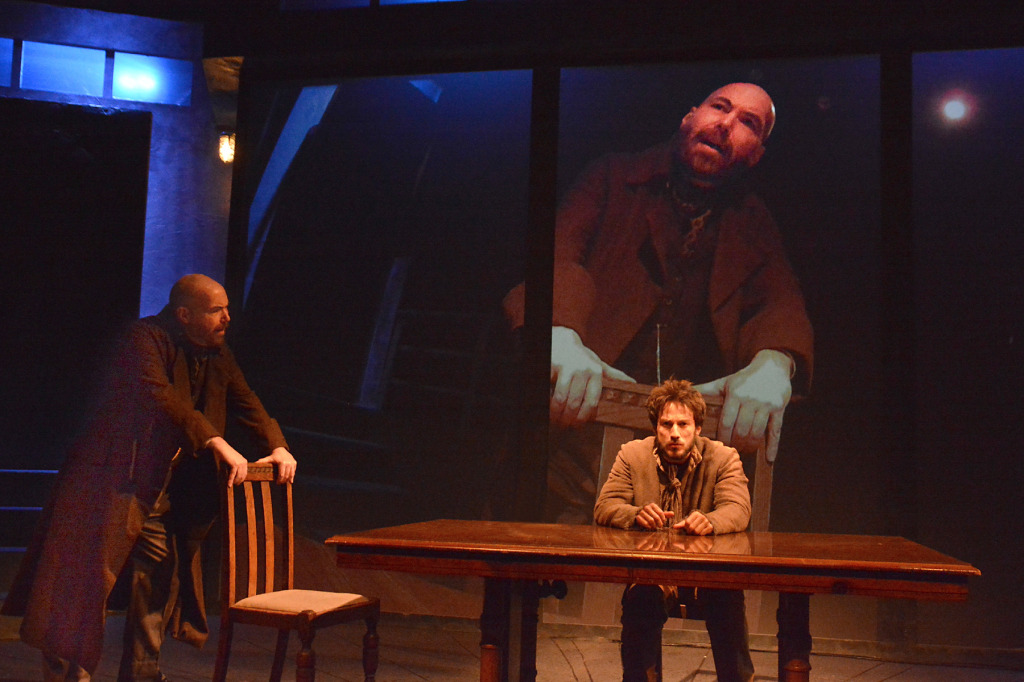 It’s apparent that Brian Wallace, who plays the police investigator, (or something like that,) is the most accomplished stage actor of the trio. Lola Kelly, the lone female, is a redhead, and you know I always support my fellow gingers.

One big bonus of this presentation is giant projections of the actors’ faces from time to time, provided by small, unobtrusive cameras right on the sparse set; they are not only helpful, but interesting. There’s most likely an artsy reason for that theatrical device, bit it escaped me. Beyond that, the Edgemar is not a big theatre, so I’m sure the audience members in the further back rows really appreciate being able to see the facial expressions so magnified, especially in such a psychological drama. 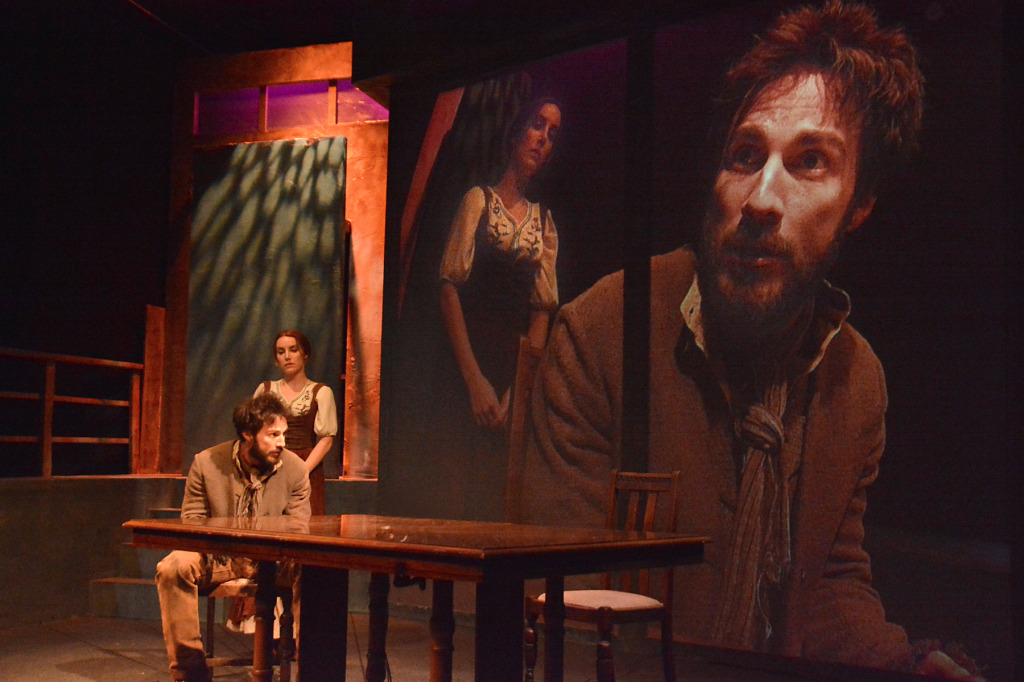 The bottom line for this version of Crime and Punishment is that the people who I believe will enjoy it most are intellectuals. Or more likely in this town, pseudo-intellectuals. Or fans of The CW.  No judgment from me, either way.

I especially give this company props for throwing a lovely opening night post-show reception. Not every theatre does that anymore, which is a shame for the actors and crew to not be able to be feted after so much work. Everyone was in a festive mood, added to by the lovely assortment of treats on offer. And whoever put the table together was even thoughtful enough to put signs on each dish, telling us just what they were. I really appreciated that.

Even though you won’t get a post-show reception when you see Crime and Punishment, there are so many possibilities of activities to add to your theatre experience at this site. Not only is the Edgemar an interesting, intimate theatre, but its Main Street location in Santa Monica is a great area to explore before or after the show. There are all kinds of eateries, from upscale to just snacks, and even many of the stores stay open late. And you can gear up for the show, or cheer yourselves up after it, with drinks at one of the many hip bars on that one street.

Just brush-up on the tale beforehand, so you’ll be up to speed from the get-go.