Trending
You are at:Home»THEATRE»THEATRE: CLYDE’S
By Karen Salkin on November 21, 2022 · THEATRE

What a perfect theatrical presentation Clyde’s is!

As both a theatre and restaurant critic, and lover of laughter, this is exactly my kind of show—funny to the max, short and easy-to-watch, and…full of food!!! 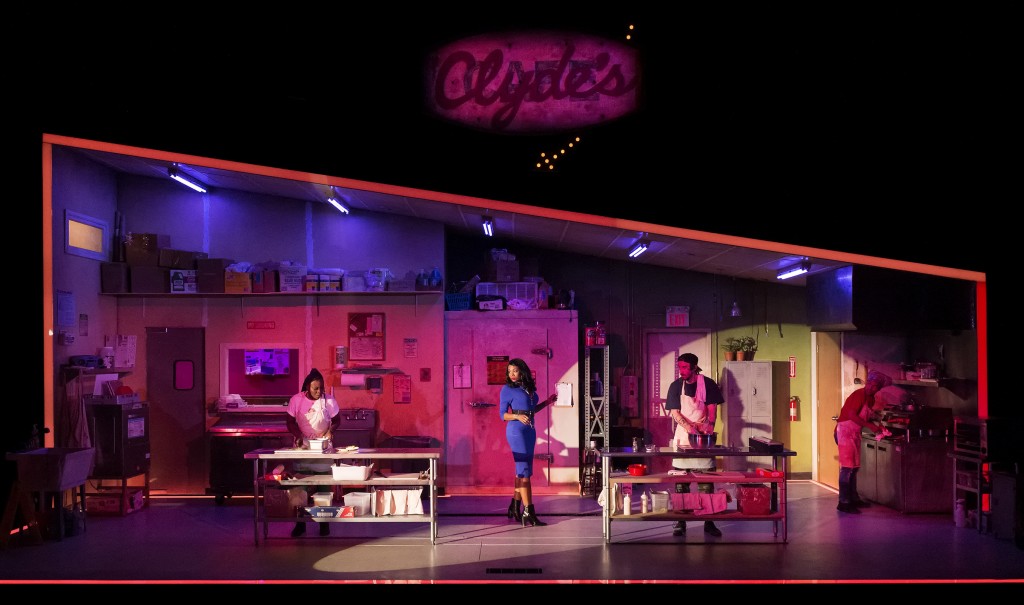 Photo by Craig Schwartz, as is the one above.

Written by Pulitzer Prize-winning playwright Lynn Nottage, and presented now at the Mark Taper Forum in downtown LA, Clyde’s takes place in what the program tells us is a “truck stop sandwich stop” owned by a woman named Clyde. (I don’t get why she has a man’s name, but it’s of no import to the plot. Nor is that it’s a “sandwich stop”; perhaps it’s just a typo, and they meant “shop.”) [Note: After that location assignation, the program states, “A liminal space.” I, a writer, didn’t know that word, nor did any audience members around me, so I had to look it up. I love learning new vocabulary! So I’ll leave it to you to do the same.]

The basic premise of the play is that a quartet of ex-cons work in the kitchen of a truck stop eatery, owned and run by a fancy, mean woman, who was also in the joint at one point. That’s all you need to know about it.

It reminded me that almost a decade ago, I had read about a local Los Angeles eatery, Redemption Food, that employed mainly people who had served time in prison, and I thought, “What a lovely idea!” I pictured it to be all happiness for them. But Clyde’s, while an absolute laugh riot, was also serious enough to set me straight about that fanciful and misguided notion. However, I loved that the manager at Redemption told a local news outlet back then, “We don’t want to teach them how to work in a restaurant. We want them to get better at the skills, [and] what they want to do in their life.” Clyde obviously didn’t get that memo. 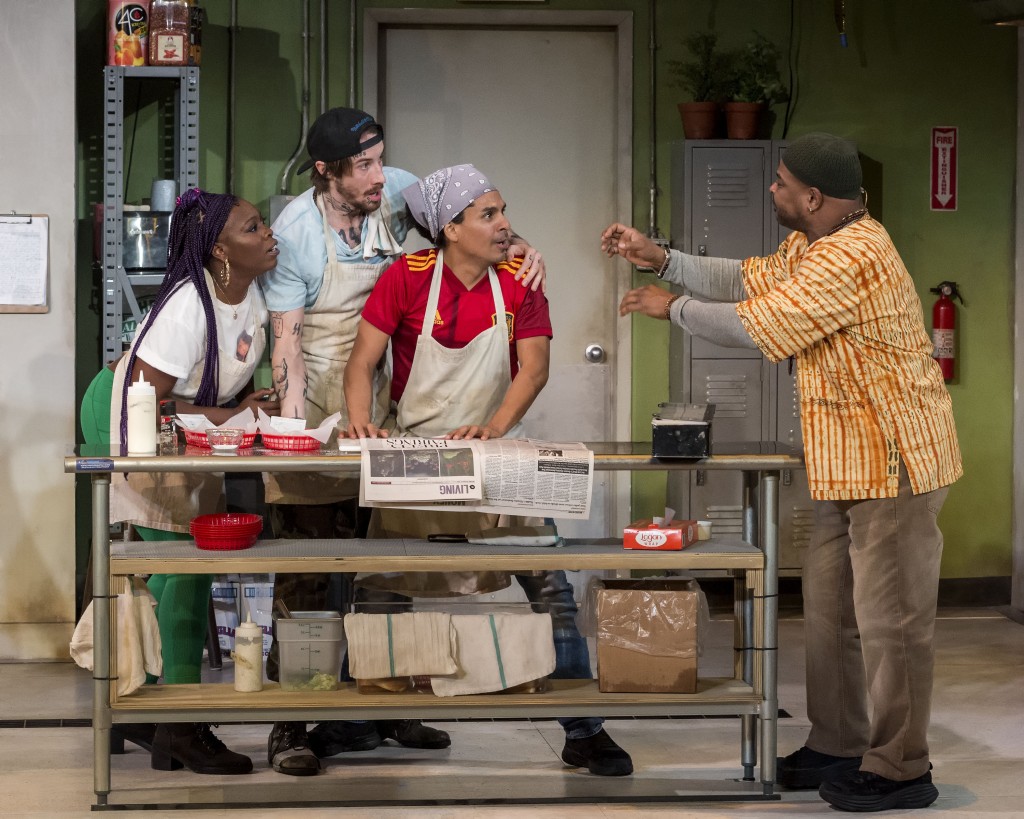 For those of you who are concerned, as I always am, about an entertainment’s true genre before seeing it, let me assure you that Clyde’s is a comedy. (As opposed to other plays by Ms. Nottage; I’ve seen only her Sweat four years ago, also here at the Taper, which has a lot of humor, as well, but is basically a very painful slice of life.) Of course, as the premise involves previously incarcerated people for whom we’re rooting, there are some sad tales within it, but nothing to dread. (Many a comedy with a dreary premise has a tragic ending, but, thankfully, this one does not.)

So just be prepared to have a good time. You can analyze it all later, if that’s your thing, because like just about every theatre presentation, I’m sure there’s a deeper meaning. (I’ll address that shortly.)

The casting is perfection. I rarely mention the people who do that job, but I must laud Rachel Jimenez here. Despite the production having already been on Broadway with four out of the five actors being different, (only the hilarious Reza Salazar reprises his part as Rafael here,) I cannot picture anyone else in each role—the portrayals are all so real. Perhaps the fact that I wasn’t familiar with any of the quintet helped me see them as only their characters. I totally believed they’re all exactly those former inmates. 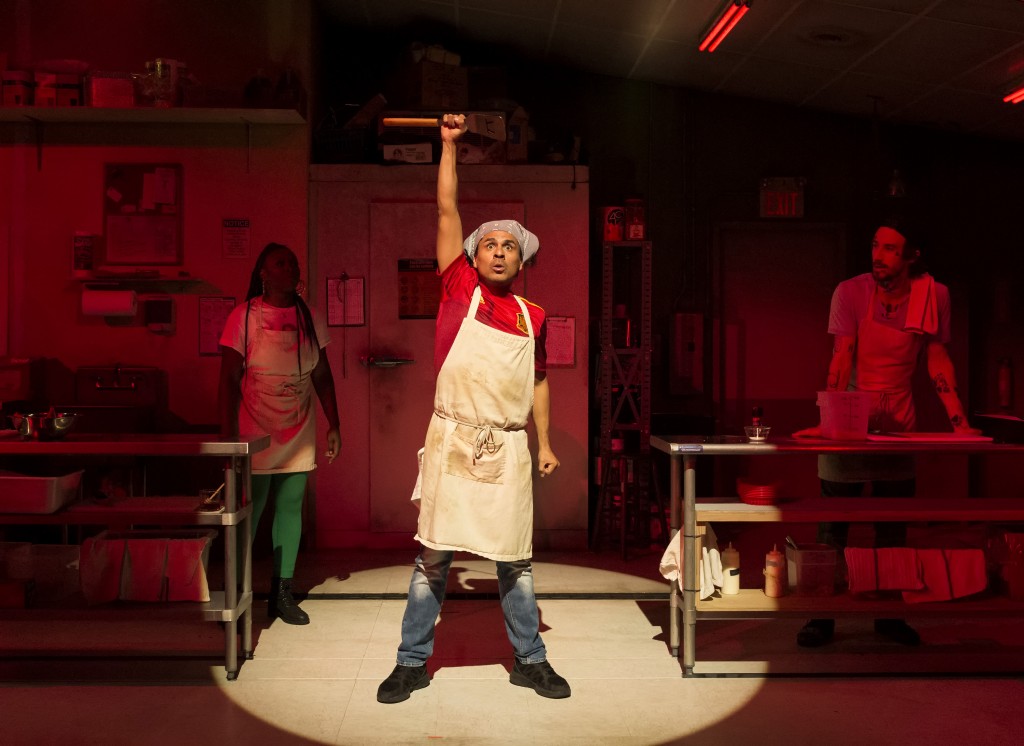 Just as I had jotted-down the note, “The grown-up man is so authentic,” (referring to Kevin Kennerly as Montrellous, the senior member, and guru, of sorts, of the kitchen staff,) one character asked him, “Are you this smooth all the time?” My thoughts exactly! (As you can tell, my fellow Brooklynite, Lynn Nottage, is a much better writer than yours truly!)

Tamberla Perry, the actress who plays Clyde herself, is the perfect-looking woman, and so funny, to boot. She really needs to be on a sitcom–she’d be a hoot on Abbott Elementary as the sister of the vain Principal! (Do I get credit if the show listens to me?) And I adored her plethora of glamorous outfits, by costume designer Jennifer Moeller, her wigs, by the fabulously-monikered Cookie Jordan, and more than anything on that stage, (even the creative sandwiches,) her blinged-out fingernails. Although sitting in sublime* seats in the first section of the Taper, I shamefully used binoculars to get a sharper gander at them! *[I copped that adjective from the script!] 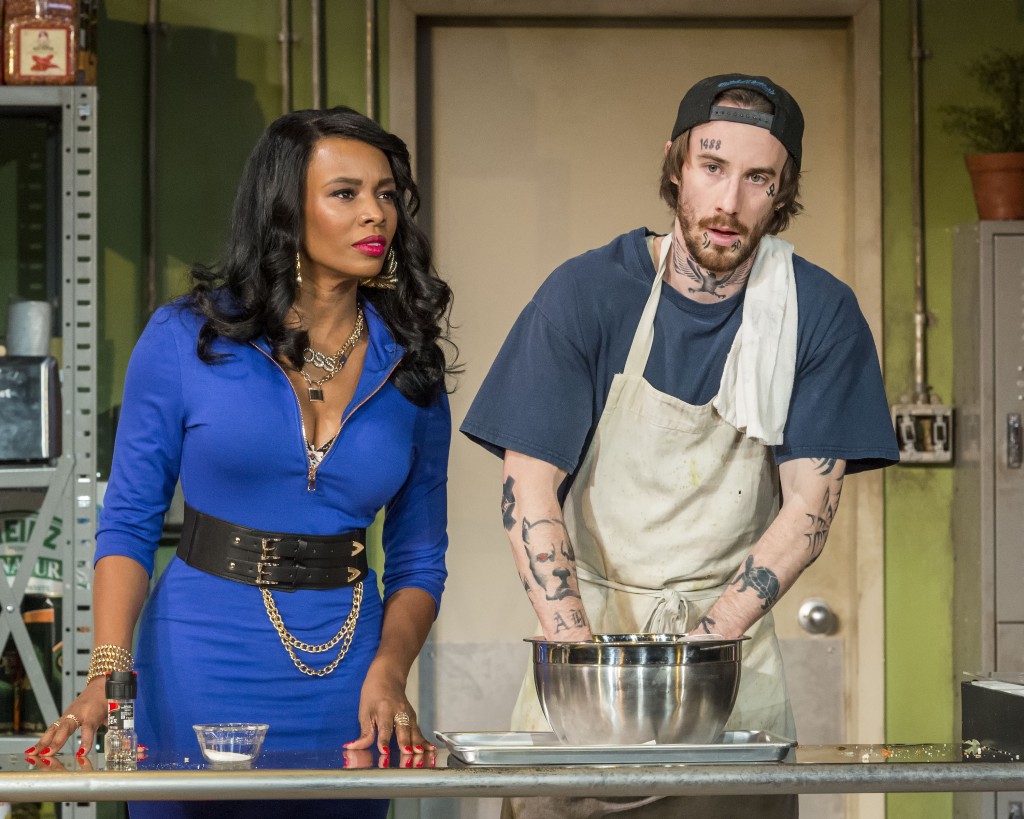 Tamberla Perry, (minus the jeweled nails,)  and Garrett Young. Photo by Craig Schwartz.

Nedra Snipes, as Letitia, the young girl who always seems happy despite her problems at home, is so genuine that I kept forgetting she’s an actress.

And Garrett Young, as Jason, the only white ex-con, brings a major shot of life and humor to the proceedings when he shows up.

Getting back to the wardrobe for a second, I love that the outfits change from time to time within the continuous action on the part of all the cast. That’s genius.

Speaking of the continuous action, my friend Jeanine and I felt bad for the actors for having to prepare food just about the entire time. I started cooking during the pandemic, and I can’t tell you how much I detest chopping now. So I definitely could never be in this play–I’m not that good an actress. (Wow—what a loss to the theatre world to not get to watch me chop on stage!)

On the way home, Jeanine pondered how all that “business” could even be written into the script. I’m assuming it was all conjured-up by the director, Kate Whoriskey, unless a professional chef came in and trained them. So, great job on that front to everyone involved. 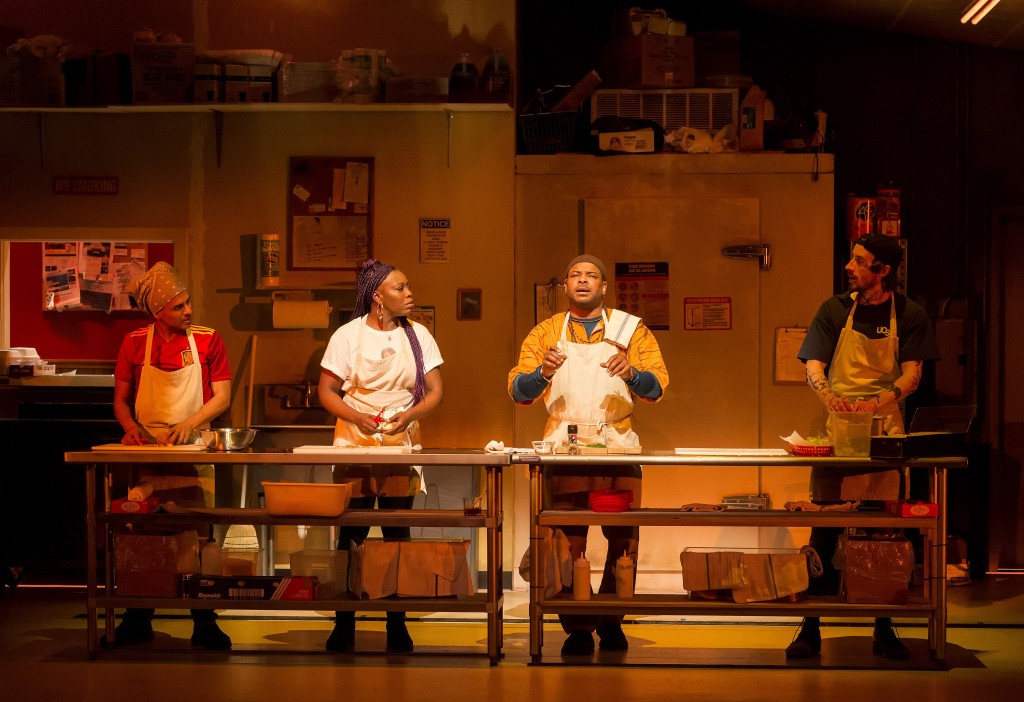 But two things made me worry about all the chopping-while-talking, especially when a character is angry. One is that I kept wondering what would happen if one of them chopped-off a finger during the production, and if there’s a medic standing by. The other is that, as I think you all know, I can’t bear food being wasted, so that part was really hard for me. I know it’s necessary to the action here, but I kept hoping it’s all fake food. (As “impossible” burgers are! Just sayin’.)

The not-quite sanitary habits of kitchen staff are a riot in Clyde’s, but in real life, no one wants to know how disgusting the people who prepare their food are. They may never be able to eat in a restaurant again after seeing this show! As a matter of fact, the first time I was on The Tonight Show, Johnny Carson asked me if I ever go into kitchens to check them out when I’m reviewing restaurants. I had never thought to do so until he mentioned it, but I’m glad I didn’t inspect the kitchens back then because I would have never dined out again. (Actually, seeing the iffy preparations should be my policy now, at least until I lose a bunch of pounds.)

As for Lynn Nottage’s writing, I couldn’t copy down her brilliant lines fast enough. Three I loved are, “I can taste your impatience,” “Over-complication obscures the truth,” and especially, “This world is mean. I’m just in it.” I hear ya, honey!

On a deeper level, (which is far from what I’m known for exploring—that’s what college was for,) all of this can be applied to so much else in life—the tyrannical boss (or establishment,) the lowly demeaned workers who are trying to better themselves and be creative to achieve something higher, the getting told to stay in your place, etc. But, rather than analyzing possible messages in the script, I prefer to just enjoy the ride and laugh a lot. 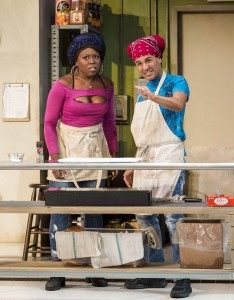 The show is so funny, in fact, that it made me forget about not having any lip balm with me that night, (which I panicked about the whole way to the theatre,) and that, just as it was about to begin, I got a deep paper cut…from the program! And let me tell you, I never forget a paper cut!

So, of course, I’m highly recommending Clyde’s! I cannot imagine anyone not loving it.

Here are two major tips for when you see the play: Firstly, don’t look away for even one second or you might miss a really funny visual! There are soooo many of them!

And, perhaps even more importantly, definitely eat before you go; otherwise, you’ll be so distracted by all the food discussions and preparations that you won’t be able to concentrate on the clever script and wonderful performances!

One final quote I have to share, uttered by Montrellous, is, “I crave the perfect harmony of ingredients.” (Don’t we all.)

And the perfect harmony of ingredients is exactly what Clyde’s provides their audiences.

Do not miss this one! But get your tickets now–it’s at the Taper for only four more weeks!