Trending
You are at:Home»THEATRE»THEATRE: CHICAGO
By Karen Salkin on April 28, 2010 · THEATRE

Chicago is back at Hollywood’s Pantages Theatre, for at least the fourth time, and it just never gets old. It doesn’t seem to matter much who’s in it–the music, and especially the choreography, hold it up no matter what. It’s just one of those entertaining shows that’s goof-proof.

There’s really not much to say about it; if you’ve seen any production of it, you already know it’s a fun show, and one that’s worth re-viewing. If you’ve never seen it before, and shockingly, there are still some of you out there, I suggest that you see it now. It’s almost like Musical Theatre 101–it’s a must in any theatre education. 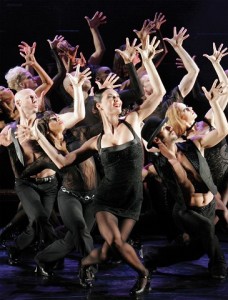 The best part always, for me, is Bob Fosse’s iconic choreography. It look so easy, but trust me, as a former dancer, it’s far from it. And the show always features the best bodies ever, even when the dancers are much older than expected. (Which I applaud. We don’t always have to see 20-year-olds when the originals are still in great shape.) People who specialize in Fosse Technique just keep those muscles forever!

Speaking of bodies, although former Destiny’s Child member, Michelle Williams, who stars as murderess Roxie Hart, is fine in the part, they should have redesigned her costume to cover up those skinny pins of hers! I know the wardrobe has been the same in every production from the beginning, but a pair of pants would have gone a long way to keep the audience from being distracted by her way-under-developed gams.

I’m not just being picky–when she’s dancing next to those real dancers, who are absolute specimens of physical fitness, it really detracts from the big picture, which is what Bob Fosse was all about. For a singer, who’s not really a dancer, she holds her own; I’m just suggesting a pair of loose slacks would have been helpful to the viewer’s eye. Especially in the final number with Roxie’s arch-nemesis, Velma Kelly, played to perfection by Terra C. MacLeod.

Other than that, I have no complaints. As always, it was a fun evening of theatre, one that I suggest you all go see while you have the chance. (Mother’s Day gift, anyone?)

(Note: I’ve seen Brent Barrett play Billy Flynn a few times over the years, and I’m happy to report that he gives it the same gusto as the first time, without getting extra campy about it. I imagine that must be hard to do, so good for him.)

There is one thing that makes this run different from the previous ones. That’s the fact that there’s a new W Hotel across the street, so we all have someplace hip to go to before or after. Even if you don’t go there at all, it kind-of lends an air of glamour to the whole evening. (Matinees, too, of course!)

Luckily for those of us who haven’t had the time to visit there yet, that’s where the opening night party was held, in what’s entitled The Great Room. (I wish it had a better handle, though. Kind-of self-aggrandizing, if you can attribute that to a hotel.) The hotel was fabulous, the food, especially the Caesar salad was excellent, and the service was pleasant. It was the perfect happy ending to a whole happy evening.