Trending
You are at:Home»THEATRE»THEATRE: CAGNEY, THE MUSICAL
By Karen Salkin on October 24, 2017 · THEATRE

Everyone in Southern California must see this musical! It’s the last week to do so—it cannot be extended. Robert Creighton doesn’t play James Cagney–he is James Cagney!!! I’ve rarely seen such a complete embodiment of an icon before.  So do not miss this one! 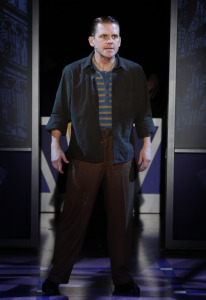 Robert Creighton. Photo by Carol Rosegg, as is the big one at the top of the page.

I don’t often read my program before I see a show, so I kept wondering where they found such an absolutely perfect guy for the role—an energetic, shall I say height-challenged, not-old-not-young guy, who can act, sing, tap dance, and totally command the stage! (Someone who looks just like Cagney and can tap dance as well is what I think would be the most difficult.) But when I noticed that Robert Creighton wrote many of the songs, I realized that it must be the Broadway vet’s own project. (I found-out later that it is! I guess I should have been a detective.)

I give Robert so much credit for doing that! I always joke that I should do a show of Cher’s life story (since I’ve always been told that I look like her ever since I was a kid, even by several of her friends,) but I can’t sing.  And then I add…neither can she!  (Ba-dum-bump.) [Note: But now someone actually is!!! On Broadway! They should come to me for authentic wardrobe, since I own so much of her old stuff. (I always got invited to her private garage sales, when I could fit into her old attire. Actually, when she and I both could!)] 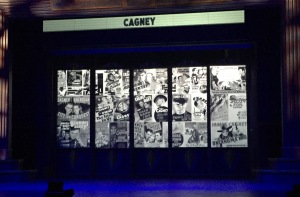 Since I always seem to be double-and-triple-booked every night nowadays, and I really, really wanted to see this show, I chose to do something I’ve never done before in LA—I went to a matinee!  Seeing it that way made me feel like I was in New York! What a fun feeling that was. I’m going to try to repeat that experience whenever I can, and I suggest you do the same, if you have time during the day.

Now I have to get back to raving about Cagney, The Musical. It comes to LA straight from New York, where Robert Creighton won a Fred Astaire Award for his wonderful dancing. The show was a hit off-Broadway for over a year, so we Angelenos are just lucky that this talented cast had the stamina to continue it out here, no matter how brief the stay. 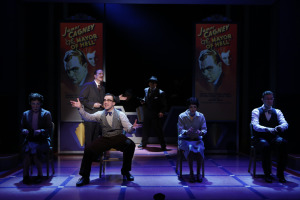 In addition to all the musical aspects of this show, (which I’ll get to in a minute,) I was thrilled to learn so much about James Cagney! I never knew most of his story, like that he was called in to the House Un-American Activities Committee back in the day. Or just how philanthropic he was, which is a topic so relevant to our current celebrities. (But, when I did my research later, it turns-out that not all of these details are the same, like that his wife’s name was really “Billie,” while in the show they called her “Willie.” And the play showed Cagney getting a SAG Award in 1978, but those awards didn’t begin until 1995; I know that date for sure because I was on the second Nominating Committee. I have a feeling that latter part was distracting for no one else but me, but, as with just about every biopic I’ve ever seen, I don’t really know what the truth of all of those situations is, which frustrates me a bit.) 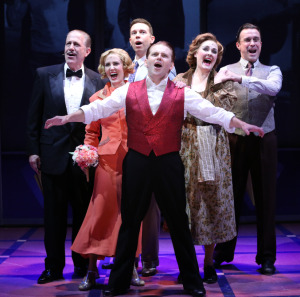 Even though, outside of Robert, (who is on stage almost the entire time,) it’s a totally ensemble production, there are two others I must single out. I absolutely adored the light-as-air dancing of Josh Walden, who plays Jimmy’s brother, (and looks just like a dancing Stephen Colbert.) And the day I saw it, understudy Karen Hyland played the role of Cagney’s wife as though she goes on for every performance; I can’t imagine anyone doing it better. We didn’t even think she was an understudy! [Note: A different guy than the one I saw plays Bob Hope for the rest of the run.] 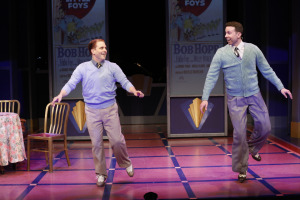 Best yet is that every single member of the six-person cast can really tap dance! (Duh. That’s why they were cast to begin with!) I’m always so amazed when tappers have other talents, as well, like singing and acting. Tap is not just any kind of dance—it’s harder, and certainly can not be faked, as some other types can, by just pointing toes and waving arms. So working on that is hard enough in life without also singing, acting, or playing instruments. This is a very talented cast!

And Cagney features my kind of tap dance. I appreciate all forms of that art, but when I recently saw a show of a more innovative type of tapping, I found myself longing for the good old-fashioned kind, which this is. I love it! I wish there was even more of it in the musical! 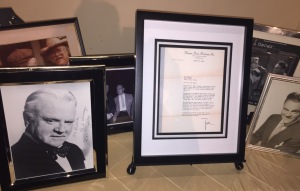 I actually went in expecting Cagney to be mainly a big tap musical, but this show is so much more than that. It’s really a biographical musical, with tapping! The song duet, Falling In Love, is adorable.

And I appreciated that the musicians are on stage for the whole show, behind a trio of movable screens, so they’re occasionally visible. I feel like the sound is richer to have them up there. 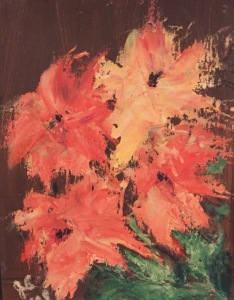 One piece of the artwork painted by James Cagney that is on display in the lobby. What a multi-talented man he was! Photo by Karen Salkin.

The show goes by really fast, and is filled with humor, rather than the angst which usually comes with stories of famous people. At one point, after saying, “What do they know,” about bad reviews by film critics, a character added, “Nobody ever erected a statue to a critic!” That made me laugh, even though I once won a Marvy Award! (It was awarded to people who are marvelous in their field.) It’s not exactly a statue, but close enough for me.

Cagney, The Musical made me want to see all of James Cagney’s films, and right away! (If only I ever had time for even one of them!) The show brought to mind this change in our times—back then, audiences didn’t want to see Cagney do any roles other than tough guys. But nowadays, show biz demands that you keep reinventing yourself!  I think I liked it better the old way, because I’ve been the same since I was born! 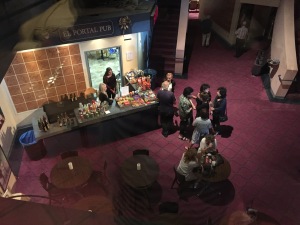 Besides loving this show, I’m a fan of the venue it’s playing in. The El Portal holds a special place in my heart because the lobby is where I first met Adam Lambert. (Every time we run into each other now, we hark back to that moment, when I told him that hearing him sing is a religious experience!) The lobby won’t have him in it now, of course, (although you never know in this town,) but there’s some beautiful unique art work by Marjorie Sarnat on the walls. And there’s also a display of paintings by none other than…James Cagney himself! Please don’t miss any of it. 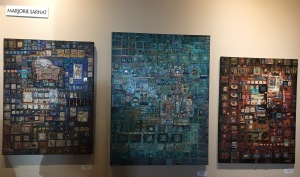 Some of the artwork in the lobby. Photo by Karen Salkin.

A bonus is that all the seats there have great sightlines. [Note: But they do tend to be a tad uncomfortable, (heck—the place is ninety-one years old!,) so maybe bring something to prop-up behind your back.]

Just be warned that you’re going to leave there singing songs like You’re A Grand Old Flag and Yankee Doodle Dandy. So you might want to wear some red, white, and blue.