Trending
You are at:Home»THEATRE»THEATRE: BORN FOR THIS
By Karen Salkin on July 26, 2017 · THEATRE

The opening night of Born For This, the musical about gospel music’s great Winans family, at the Broad Stage in Santa Monica, goes into my pantheon of all-time favorite events! The entire evening was magical. 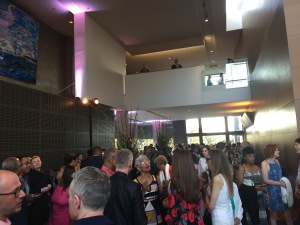 The opening night crowd at The Broad Stage. Notice how appropriately everyone is dressed for the occasion! Photo by Karen Salkin, as is the big one at the top of this page.

I just spent half of the last week raving about this show to anyone who would listen, and the other half reliving every second of its opening night for myself. And now that my brain has spent so much time thinking about what I just experienced, I can finally put my thoughts into words to share with all of you. (At least I hope I can!) I actually don’t even know where to begin; this was such a perfect evening, from top to bottom.

As a fan of Motown, The Musical, I was especially interested in seeing this new musical because it was co-written and directed by Charles Randolph-Wright, who did the honors for that previous one. And I wound-up loving Born For This even more! This is how good it is—I even forgot all about my evil back pain that has been distracting me from enjoying most everything else right about now. But I didn’t even know I have a back during the opening night at The Broad Stage! 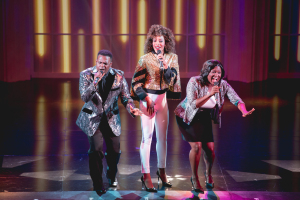 Born For This is the true story of gospel music’s now-very-famous brother and sister singers, BeBe and CeCe Winans. It tells of how they rose from teen-agers in Detroit to become televangical singing stars on, of all places, Jim and Tammy Faye Bakker’s Praise The Lord Network! I still can’t believe it—it seems that I’ve always known of the Bakkers and of the Winans, but I never ever knew of their connection! Wow, what a story! (I was never aware that the Bakkers were this nice and normal in some areas. Good to finally know.)

It would be an interesting tale even if it wasn’t the truth about real-life famous people. Trust me–you don’t have to know a thing about any of these characters in order to enjoy this musical. It speaks for itself.

Born For This is the perfect combo of great music, (which is mostly written by BeBe Winans,) spot-on comedy, pathos, a true very human story, fabulous costumes, and utilitarian and attractive sets. There are also so many clever touches. 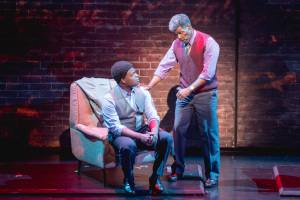 And some of the lines are just brilliant! Here are a couple of examples: “You have to learn to make friends with the rejection,” which was said to young BeBe, and, “You can’t have on the same thing the audience is wearing,” which Whitney Houston told the naive up-and-coming Winans kids. I love that one!!! (And I’ve totally lived the first one!)

One of the fun parts is that BeBe and CeCe’s real-life nephew and niece, Juan Winans and Deborah Joy Winans, play them here! Better casting than that you cannot find anywhere!

While we’re on that area of the production, you know that I rarely laud the casting, but I must this time because there is not one weakness in the group of actors. So, big kudos to Tara Rubin Casting for a perfect job, in every role! And also to the big cast for doing such wonderful jobs of keeping us entertained. All the voices are superb, (duh—it’s a gospel music show!,) especially those of the quartet (Brad Raymond, J. Daughtry, Desmond Sean Ellington, and Jonathan Burke) who play the older Winans brothers. 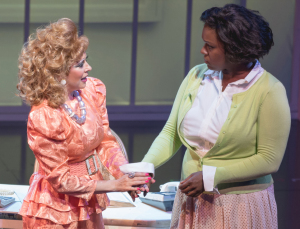 While I’m on that topic, I know that this entertainment is about gospel music performers, but the real star of it is definitely Kirsten Wyatt as Tammy Faye Bakker. As soon as she and Chaz Pofahl (as Jim Bakker) first walked out on stage, I wrote, “The people who play the Bakkers are perfect.” But it got so much better than even that first moment! Kirsten is a riot who totally captures the essence of Tammy Faye without making it look like a Saturday Night Live sketch. And she does it with heart. And she can sing, too! That was a surprise. Where has this girl been hiding?! She really needs to win every award available for this work.

Another stand-out is Nita Whitaker as Mrs. Winans, the family Matriarch. She so reminded me of Mrs. Emma Hazel, my college boyfriend’s mother who told me to mind my “Ps-and-Qs” when her son and I spent a week-end away. So I know first-hand just how perfect Nita’s portrayal is. 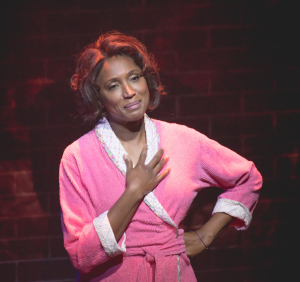 I had actually met Nita many years ago, when Adam Lambert introduced us shortly after they had been in an awful musical together, (The Ten Commandants—don’t ask,) which I was crazy enough to see…twice! (Because of Adam.) That meant that I already knew she can really sing. So, I was getting a bit frustrated that Nita’s supporting character had no songs. Until the middle of the second act, when she performed Seventh Son. I was a sobbing mess by the middle of that number, as I’m sure at least half the audience was, as well. She got a standing ovation right in the middle of the act, which is highly unusual in any theater piece. (So I’m warning my fellow girly-girls—wear waterproof mascara to this Born For This!!!)

I was also absolutely and madly in love with the costumes by Tony-winner William Ivey Long, especially Tammy Faye’s fabulous wardrobe! Each piece was better than the one before. My favorite was turquoise-themed outfits on the entire PTL group of singers. I found myself looking forward to each next scene, just to see what the actors would be wearing. You will not want to miss Whitney Houston’s’ quick change!

Since this was only my second time at this theatre, I was happy to discover that the Broad Stage is an outstanding venue for music like this! It all sounded great. And I don’t think there’s a bad seat in the house.

On a crazy personal note, I was especially tickled by the kooky make-up job on the Tammy Faye Bakker character because of a crazy acting job that I had. The description of one of my film roles was listed as a “Tammy Faye Bakker” type of “fancy lady,” in a western, of all genres!!!  So, my make-up guy and I studied her for a bit, to make sure we captured her whacky look onto my face.  I really did not know a lot about her prior to that gig, and still didn’t, until I saw this show. But I do know one thing—after studying her make-up so much, the Born For This team definitely got that part right!

And now, I have to give major props to the entire opening night experience. It began with a sumptuous food and drink reception in the theatre’s classy lobby. But way better than even the luscious spread was discovering some of my fellow audience members. As I was sitting there, about to bite into a lovely grilled red pepper, someone walked right by me, and I almost dropped my plate. It was none other than Stevie Wonder!!! A national treasure just two feet in front of me! You know that I rarely get starstruck because I know sooooo many famous people, but this was a million degrees different. It was music royalty! Stevie Frickin’ Wonder!!! OMG! 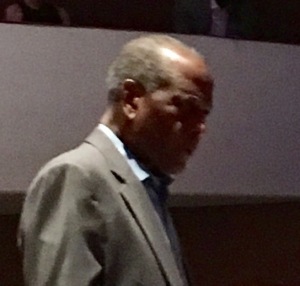 As the evening went on, I also spotted Cicely Tyson, Debbie Allen, Motown founder Berry Gordy, Jr., married couple Marilyn McCoo and Billy Davis of the singing Fifth Dimension, (who I was happy to see are still together for all these years!,) and basketball star, Tyson Chandler. And, best of all, the fabulous Sidney Poitier, right in the row in front of me, who would have been the main attraction for me, had I not already met him last year, (which I told you about here: itsnotaboutme.tv/news/charityevent-brigitte-and-bobby-sherman-childrens-foundation-christmas-gala-and-fundraiser.) My head was spinning from all that. 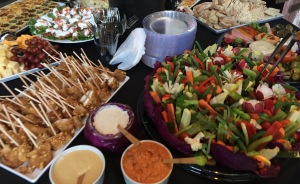 As far as the reception went, I was thrilled to have so many healthful food choices, and didn’t have to take even one bite of anything that’s not good for me. But, as we walked into the auditorium for the start of the show, I did lament a bit that there had been no dessert, because I always have to end my meals with something sweet. (To match my personality, of course. Just in case you were wondering.) 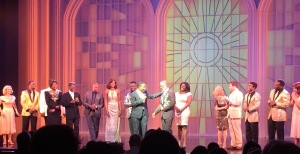 The curtain call, with Charles Randolph- Wright and the real BeBe Winans in the middle. Photo by Karen Salkin.

So, you can imagine my surprise and delight when we entered the lobby again for intermission, and there on the tables were now trays of…cookies! All kinds! And all giant! What a thoughtful presentation! I really laud the organizers of the evening for doing that! (Mr. X was laughing when I got home because I had called him during that period, and while we were talking, I noticed that some new flavors had been brought out. So he heard, “I’m having an incredible time, and…new cookies!!!” Click. I had hung-up on him to grab another snack! I know–nice girlfriend, right?) 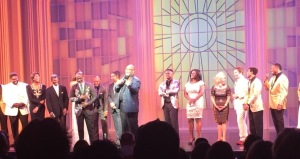 Marvin Winans, in the center, taking us to church! Photo by Karen Salkin.

And it all ended with a bang, too. At the curtain call, after all the bows and wild applause, BeBe Winans and Charles Randolph-Wright came up on stage and spoke for quite awhile, to everyone’s delight. They thanked all the people involved with the show, and singled-out some cast members, (even telling us that the role of Tammy Faye had already just about been decided upon when Kirsten Wyatt arrived, and one of the casting people said, “Tammy Faye Bakker has just walked through the door.”) BeBe also introduced some of the glitterati in the assemblage. But the highlight of all that to me was when BeBe’s big brother, Marvin, sang for us a bit. That was something else!

All in all, this was the most upbeat event ever, and the group of guests could not have been happier.

I really hope that Born For This is headed to Broadway, especially with this entire cast, so that more people can experience the joy that we all did that night.

And my fellow Angelenos, please take your opportunity to see it right here while you can. You may not get Stevie in your audience, but the show will bring you enough joy on its own.