Trending
You are at:Home»THEATRE»THEATRE: BLINK & YOU MIGHT MISS ME
By Karen Salkin on April 11, 2011 · THEATRE

On Friday night, I had a theatre experience so delightful, so devoid of pain or serious thinking, so entertaining, so mirthful, that I have to tell you about it to make sure you save an upcoming Friday night to go see it yourself. I absolutely loved Larry Blum’s one-man show, Blink & You Might Miss Me at The Asylum Lab in Hollywood. 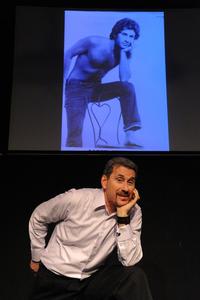 Larry Blum, then and now.

I had stopped going to smaller theater shows a few years ago because they were all either trying to be profound (translation: depressing,) or they were just vanity projects, with no thought whatsoever to entertaining the paying audiences. But this one I had a good feeling about because I’ve known Larry personally, though just to say hi to, for several years now.

Usually, I know exactly how I know people, but in Larry’s case, though I have some idea, it seems like he’s always just been around. I bump into him at opening nights and other fun events, and see him on awards shows, escorting the female celebs up to the stage, but never really know much about him, other than that he was one person I was happy to see. (Trust me, that’s not a big list he’s on nowadays.)

But, this autobiographical show explained his whole life…and in just over an hour! Usually at shows, I take lots of notes, so I know what to write about them. (Or, on more than one occasion, my notes consist of my to-do lists, if you get my drift.) But, though I had my pad and pen out, I seriously did not want to take even one second away from what Larry was saying to jot down what he had just said! His whole act was riveting.

And, of extra interest to me, which it might also be to other people who have been in and around the biz for many years, I shared so many of his experiences and acquaintances (Cher’s garage sales, Kenny Sacha, Lily Tomlin, etc.) that I kept thinking, “Oh, that’s where I met him!” It was a really fascinating walk down memory lane for the whole audience, judging from the hearty, often knowing, laughter from the crowd.

As my guest that night said afterwards, “Larry’s quite the showman.” And he did it so simply. It was a pleasure. He just told his story, from growing up in New York, Jewish and gay, to learning to dance at age twenty-two, (which I’m so impressed with, I can’t tell you,) to his very many show business jobs. His stories include so many really famous people, (Bette Midler, Bob Hope, Lucille Ball, Olivia Newton-John,) it made my head spin. What a life this guy has had!

And Larry tells it all with not one whit of phoniness or self-aggrandizement. Rather, it comes off as just a funny friend telling you about his eclectic career in a nutshell. And, the clips he shows of his many dance and acting jobs are icing on the cake. I don’t know how he even archived TV shows that far back.

And, best of all, he somehow cheered me up over my career! He made me realize that all these accumulated gigs make us a success, even though we didn’t reach the pinnacle. (Yet. Knock on wood.) If a performer can have a few entertaining stories over the years, it’s all good. (Though I doubt many can put them together and present them as well as Larry does.)

One thing that amazes me about the show is that he can tell the same stories week after week with the same sense of fun and joy. I did well over three hundred episodes of my television show, Karen’s Restaurant Revue, and couldn’t repeat even one story! I did occasionally at parties, but I felt like I was copying from myself. It’s crazy, I know. But, it makes me admire Larry even more because he’s able to pull it off.

The biggest compliment I can give any raconteur is that he left us wanting more. And that’s just what Larry Blum does with Blink & You Might Miss Me. I can only hope that he does a sequel down the road because such funny, happy, uplifting, cheerful, charming, dishy, well-written, and well-presented evenings in the theatre are few and far-between.