Trending
You are at:Home»THEATRE»THEATRE: BILLY ELLIOT, THE MUSICAL
By Karen Salkin on April 17, 2012 · THEATRE

Mr. X and I attended the opening night of Billy Elliot, The Musical at Hollywood’s Pantages Theatre, and it turned-out to be one of the best dates Mr. X and I ever had! (A middle-of-the-night visit, way back in the day, to a twenty-four hour complete Italian restaurant in the Marina, was the best ever, if you were wondering.) The whole evening was excellent, from our great seats, to the curtain rising on time, to the celebs surrounding us, to the show itself. 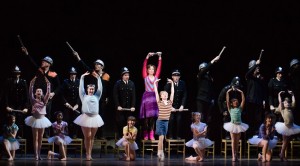 This experience also re-enforced for me my theory about expectations; when I first saw the show on Broadway, shortly after it opened to rave reviews, I was let-down, big-time. I had loved the movie, and even with house seats, the musical, (except for the dance numbers, of course!,) just didn’t cut it for me. But, going in with that previous opinion, which meant I wasn’t expecting much this time, I enjoyed this production at the Pantages so much more! And now I can even recommend it.

[And after the review itself, read on for a great ticket deal and the juicy opening night gossip!]

For those of you who haven’t been paying attention to musicals, or movies for that matter, for years, Billy Elliot is the story of young boy in a financially-depressed mining town in Northern England, circa 1985, who just wants to do ballet, for which he has a wonderful gift. It goes from there. 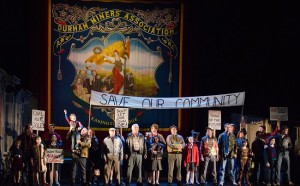 And therein lies the problem with making this story into a musical; it’s perfect for dancing and light comedy, but the mining strike storyline, which is essential, is just too depressing to lend itself to music easily. And big lugs have to be cast as the townsmen, not guys who can really show off their dance abilities. (The fun exception was Job Christenson, as dance class piano player Mr. Braithwaite, whose chunky physique made his number that much more wonderful.) So, most of the songs and dance have to come from Billy, which is a lot to ask from a kid, no matter how talented. (Four different child actors rotate in the title role.) But the dance numbers alone are worth the price of admission. 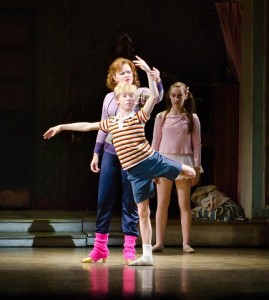 Mr. X said something to the effect that the many children in the cast, mainly in the form of ballet school girls, added so much light to the show, with which I agree. I know that having that many children in the cast turned-out to be a problem for the powers-that-be at the show’s headquarters, but we believe that they were necessary to balance-out the darkness of the mine workers. [Note of secret info: I actually have it on good authority, from a couple of people involved with the Broadway production which closed on January 8, that the producers apologized to the assemblage for the closing, saying that, even though it was still a box office success, they made a mistake by casting so many children, who, along with their teachers and guardians, had taken up too much of the allotted revenue. But you didn’t hear it from me.]

The good news about the kids is that I think that they’re the reason the show starts exactly on time; they have certain restrictions on the hours they can spend working, or something like that. And, at three hours, everyone has already been in the theatre long enough–company, workers, and audience alike. So, we’re ready to stand-up, which, by the way, is exactly what everyone does at the end of the show. That much hard work has got to be rewarded with a standing ovation! 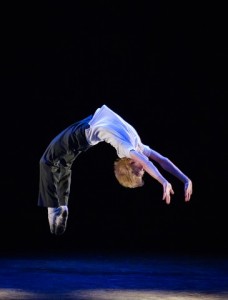 I don’t think I’m alone in my opinion that the actual music itself, although composed by Elton John, is nothing to write home about. There’s seriously not one memorable number, musically. It’s all about the dancing, and that’s pretty excellent, especially by the title dancer we saw on opening night, Ty Forhan. It’s truly amazing that they can find so many young boys who can fill this bill! That means that they all had to start on this path in life long before there was such a show for them to be in! Kudos to their parents for beginning the journey for them.

Okay, there was one show-stopping number, Expressing Yourself, but I still don’t remember the music or lyrics; just the performance of it by Cameron Clifford as Michael. When I first saw the show in New York, I was floored by the performance of Frank Dolce, (the boy who got screwed-out of a Tony nomination because, in that role, as opposed to the three “Billy”s, who got to share the award for Best Actor in a Leading Role, only the kid who played Michael on opening night got the nod.) I really couldn’t imagine any other child actor living up to that level of excellence. But Cameron played it with as much charm and personality and talent as Frank did, and he absolutely stole the show. We didn’t want the number to end! Where do they find these kids???

Another plus for the show is that, although every actor has to effect a heavy lower-class British accent, they can all be mostly understood. At first, we were really hoping for sub-titles, (I’ve seen it done in opera, actually,) but then we relaxed into their rhythms and missed nary a word. [Note: it’s strange to see them sing with the accents, though, because real singers from oversees don’t have them when they sing! (Think Tom Jones. Or Adele.] I guess the thinking heads who put the show together thought that the audience wasn’t smart enough to know that, and actually, I agree!]

Now to the good news for those of you who want to see Billy Elliot, The Musical, but funds are low; there’s a day-of-show lottery for a limited number of seats that go for just $25! This is how it works: Each day, two and half hours prior to show time, just go to the Pantages box office and place your name in a lottery drum. A half hour later, names will be drawn for those $25 seats. The rules are cash only, up to two tickets per person, and ID is required to purchase the tickets. What a deal, eh? Then, rather than going back home, why not use your saved money to go to dinner in the interesting area?

Now, here’s the dish on the Dancing With The Stars dancers in attendance, some of whom sat a few rows behind us, and with whom we exited the theatre. (Judges Carrie Anne Inaba and Bruno Tonioli were seated elsewhere, perhaps to not fraternize so much with the people they have to give marks to.) Anna Trebunskaya sat with Louis Van Amstel, and their camaraderie must have added to the wonderful samba they danced to Santana a few nights later on the Monday night performance show. There was also Chelsie Hightower and someone who just had to be her mother. [See some more gossip on them in yesterday’s Celeb Sightings column, here: www.itsnotaboutme.tv/news/2012/04/14/celeb-sightings-celeb-sightings-16]

I’ve seen Anna and Louis in person before, but not Chelsie. My big question is: why never Maks??? Maybe because I wouldn’t have been able to concentrate on the show if he was behind me. Or in front of me or to my side, etc.

We three girls had on about the same height heels, and Mr. X said that I wasn’t towering over them!!! I’m 5’6″, and I thought for sure that Chelsie was at least five inches shorter than I, but no. Now I think she’s about 5’4″ and Anna’s about 5’5”. No big whoop, either way, but it’s interesting to see how your perceptions of people on TV differ from reality. (When I did my TV for all those years, people always told me they were surprised that I was “prettier in person.” At first, I was insulted by that, but then I realized that I’d rather my reality be better than on the tube!)

So, on the way out, after Chelsie searched for her earring she had lost, (and found, in about a second, something that never happens to me!,) and then looked on the floor for an extra program, (I love that she did such a regular person thing!,) she made a wonderful observation. She told her pals, “I love that everybody in the cast has basic training,” which is exactly what I was thinking during the entertaining, uplifting tap number, by the entire ensemble, as the curtain call.

Some fans came up to Louis and asked if he was going to be back on DWTS next season, and he answered, “I hope so.” And I loved that Anna, with her thick Russian accent, was explaining the movie to her pals! So cute. So, there you have the up-to-the-minute DWTS gossip.

A night of excellent theatre, fun celebs I admire, and being out with Mr. X. It was the best time I’ve had all year!