Trending
You are at:Home»THEATRE»THEATRE: BEAUTY AND THE BEAST–A CHRISTMAS ROSE
By Karen Salkin on December 19, 2017 · THEATRE

BEAUTY AND THE BEAST–A CHRISTMAS ROSE

One of the best things you can do this holiday season is see a Lythgoe Family Panto in one of the four cities (three in Cali, one in Houston) they’re playing in. We in LA are lucky enough to have the brand new Beauty and the Beast—A Christmas Rose at the Pasadena Civic this year. (But that new gigantic venue means there are far fewer performances than usual, so you really need to hurry because it ends on Christmas Eve!) 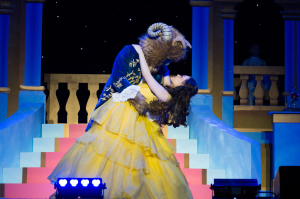 Jonah Platt and Kelli Berglund. Photo by Philicia Endelman, as is the big one at the top of the page.

Here’s a quick primer on just what a “panto” is: It’s a tradition from England which is usually performed around the December holidays. It’s a show based on a well-known fairy tale, but is not the exact story.  It features singing, dancing, some slapstick comedy, a male actor obviously playing a woman, a bunch of double entendres, and a lot of audience participation, often by loudly booing the villain.  And if done right, as it always is with the Lythgoes in charge, it’s tons of fun.

I honestly don’t know how Kris Lythgoe, who writes them all, keeps coming up with all this clever-ness! No two pantos are ever the same, and they’re all delightful. And funny! When Mr. X is yucking it up, you know that it’s a winner! 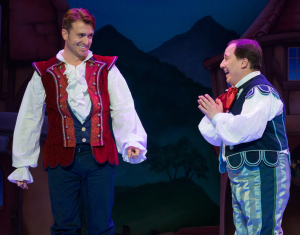 And this Christmas take on Beauty and the Beast is outstanding. There’s sooo much to laud here, but far and away the best thing about this show is the performance of James Snyder as “Gus,” the “Gaston” character. I’ve seen his work before, so I knew going in that he sings great, and has good looks to match, but I had no idea that this guy is a laugh riot!!! I was actually sad every time one of his scenes was over! He really commands the stage.

Jared Gertner, as Gus’ sidekick, Pierre, is no slouch, either. Besides how good he is in his actual role, he has the double-task of “interviewing” the kids who have the “Golden Tickets” to come up on stage for a sing-along. They do this bit towards the end of every panto, and it can be either very amusing or a snoozefest, depending on which actor that role falls to. And Jared is great at it. He makes that whole experience very humorous, without making the kids look bad. The night we saw the show, he had fourteen kids to interview, (which just might be a record,) but I actually found myself wishing that he had even more! Jared and James are the perfect panto duo, and I hope to see them both in one next year! 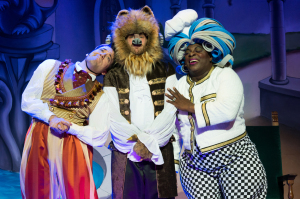 I was also thrilled when John Tartaglia, (who was nominated for a Tony for his role in Avenue Q,) broke-out his puppets for one little way-too-quick-for-me bit. What a treat to see a famous puppeteer ply his trade right in the middle of an already-fabulous show!!! I just hope that audiences recognize their good fortune to be seeing him work!!!

And we absolutely adored Gedde Watanabe as Belle’s father. As Mr. X noted, “Gedde invested himself into his character more than you usually see in a panto. What he was saying mattered to him.” His singing is so charming that I didn’t want his one solo song to stop! He’s the definition of adorable. 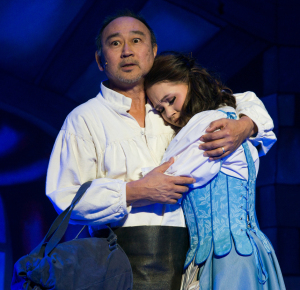 Jonah Platt, in the male title role, was appropriately scary as the Beast and handsome as the Prince. And the action was all kept moving along under the able leadership of director Sheldon Epps, a man I’ve long admired.

We LA theatre-goers have an extra-special surprise with this one—the choreography of multiple-award winner, Mandy Moore. She seems to be the most sought-after choreographer these days, so for her to choose to work on this show says something about how highly regarded in the business these Lythgoe Family Pantos are. And you can tell right away how superior the dance numbers are. Two of them feature the wolves that surround the Beast’s castle, and they are so realistic that they actually gave me chills. But I calmed right down as soon as I spied the eye-popping abs on the male dancers!!! And I think that Mandy struck gold with the casting of one of the little girl dancers, Madison Han. I could not take my eyes off her. Talk about giving something your all! (I’d love to see Madison dance sometime with my favorite young dancer, JT Church. Choreographed by Mandy, of course!)

The stage before the show begins. Photo by Karen Salkin.

And, as always with these pantos, I loved their usual colorful sets by Ian Wilson. I want to live in those magical designs!!!

I must give a big shout-out to Musical Director Michael Orland and his merry band of two other musicians, (Doug Peck and Brian Boyce,) who sounded like an entire orchestra! 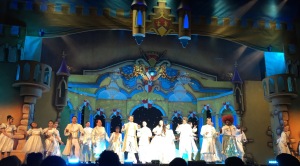 Such a happy ending! Photo by Karen Salkin.

Even though Kelli Berglund, who plays Belle, is not the strongest singer, she is super-pretty, and has a beautiful, graceful, confident stage presence, without being full-of-herself. The kids in the audience seemed to love her.

Harrison White, who fills the “male actor obviously playing a woman” requirement of a panto, has the most challenging job in this one. The guys in that position usually get to play a nutty mother or a Fairy Godmother or a wicked stepsister, but there’s no role like those in this tale, so he plays multiple characters that we’ve never heard of before, that we’re told are really one, which is a bit confusing, (even to Belle!) So, I have to forgive him for sort-of overplaying his campy role without being amusing enough for me. But he does bring a juicy spark to the proceedings, so it all works-out in the end. (And his sparkly lipstick is a thing of beauty!) 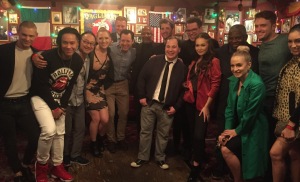 The happy cast and crew at the opening night fete. Photo by Karen Salkin.

We actually loved the whole production! Ever since Mr. X attended his Lythgoe Family Panto with me about three years ago, this is one entertainment that I don’t have to drag him to—he comes willingly, which is one of the the best endorsements a production can ever receive! He even said of this one, “It’s the kind of show where, however you feel when you walk in, you’ll feel better when you walk out.” (Wait—that sounds strange, but we all know what he means—that you will leave on a high note! So high, in fact, that he and I kept the fun going by sharing an ice cream sundae at the most Christmas-y place in all of LA—Fair Oaks Pharmacy and Soda Fountain! OMG—You have got to go see that place!!! It’s second only to Rolf’s in New York City for holiday spirit!!!) 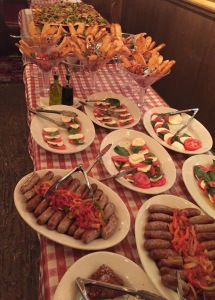 Just some of the food at the Buca di Beppo party! Photo by Karen Salkin.

On a side note, the opening night party could not have been more fun and festive! (Yes, I went to that fete, too, because I wanted to congratulate everyone.) It was at Pasadena’s Buca di Beppo, and was just perfect! The food was plentiful and delish, and the set-up was uber-conducive to mingling and sitting down to eat; as a total party girl, I can assure you just what a rarity it is to combine those two activities.

But you won’t even need a soiree yourselves when you see Beauty and the Beast—A Christmas Rose because the show is a party unto itself! Whether you’re a Beauty or a Beast, a child or a grown-up, (or, like moi–both,) or have children, the one thing you Angelenos must do this week is see this show! It will ensure that your holiday will be a truly happy one!