Trending
You are at:Home»THEATRE»THEATRE: BEAUTY AND THE BEAST
By Karen Salkin on July 23, 2018 · THEATRE

BEAUTY AND THE BEAST

Any time you get a chance to see a professional production of Beauty and the Beast, you should take it. But when Susan Egan, Broadway’s original Belle, is reprising the role, you should grab it! 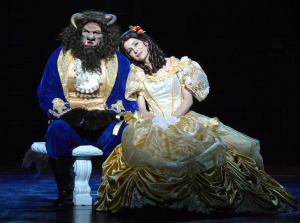 Jason Chacon and Susan Egan. Photo by Ed Krieger, as is the big one at the top of this page.

And 5-Star Theatricals, at Thousand Oaks Art Plaza, is giving us just that opportunity!  (But for a very limited run, so do not miss out! Go right to their website, at the bottom of this page, for tickets. And then come back up here and read the rest of the review, of course!)

Beauty and the Beast is one of my three favorite Broadway shows ever, right behind The Drowsy Chaperone, and my number one of all time, (perhaps because it’s about me,) Peter Pan! I’ve seen Beauty and the Beast several times over the years, so I loved sharing this magical experience with my young friend, Nina, who was seeing it for the first time. And she was as thrilled with it as I was with my first time. And her being a major fan of Susan Egan made this particular presentation that much more special. 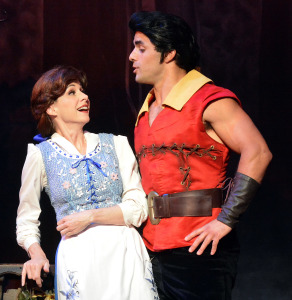 Speaking of Susan, I realized that I had seen her play Belle in the original Los Angeles production, twenty-three years ago, when she and I were both just young ’uns! So I was a tad concerned about how it would work to have her play an ingenue this many years on. But she’s so phenomenal that I forgot all about the age issue right away. And, anyway, young guys love older women, don’t they?

Susan Egan appears to be ageless; she still looks like a young girl, with her tiny little body. And her beautiful voice sounds exactly the same as it did back then, if not even better, since she does many concerts these days. And, boy, can she high-kick! And even more important to the portrayal than her musical talent–this is not some little naif, trying to find her way into the character; this is someone who’s lived the role! It’s like seeing Mary Martin in Peter Pan in person, something I only wish I could have witnessed! It was gratifying to see just how much the opening night audience really appreciated Susan. [Note: She should have been afforded a major bow by herself, though, so we could have properly shown her our admiration. She comes out at the end with the guy who plays Beast, and then they each take a brief solo bow. But she totally should have come out last, all by her lonesome! Just sayin’.] 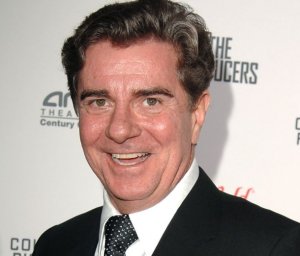 Just paying a bit of tribute to the late great Gary Beach.

I have to digress a minute to say that seeing Beauty and the Beast this week was a tad bittersweet for me, and I’m sure for many others there that night, because the original Lumiere, the vibrant Gary Beach, who was absolutely the best man to ever light-up his hands, had just passed away three days before, so I could not help thinking of him several times during the show.

Getting back to the review, I was too enthralled with the whole shebang to take notes during it, so I don’t have anything in-depth to say. The main ingredients–songs, music, charm, wit, colors—are built into the script, so seeing Beauty and the Beast can be a wonderful experience if the presenting company delivers, and this one did exactly that. 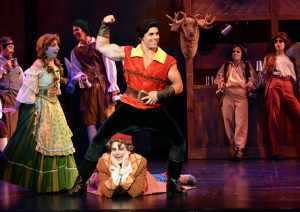 This is an excellent production, with every cast member contributing to the overall enjoyment. The singing and dancing is spot-on, and the humor, especially where Adam Hollick as Gaston is concerned, puts it all over the top. The audience I saw it with reacted with glee to every nuance. And the performance of Jason Chacon, as the Beast, grew on me (as the character does on Belle,) because I loved his voice.

When I saw this show originally, all those years ago, the friend who was with me on opening night said that, even more than the show itself, he loved watching my face light up during it. He said that I looked like a little kid seeing fireworks! So I thank 5-Star Theatricals for giving me his experience this time for myself, to look around at all the people enjoying this show for the first time, especially Nina, and seeing what I looked like back then. That was a blast. 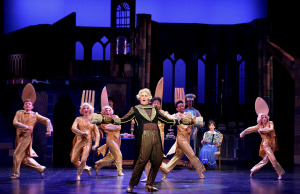 Marc Ginsburg and the Company. . Photo by Ed Krieger.

And there’s something new to discover with each viewing. I can’t believe that this insight never hit me before, but, as a writer and former teacher, I love that books is what brings the couple together! So, yay, literature!

Now let’s discuss the score. That people can write such beautiful music, which truly stands the test of time, is magical to me. Having previously seen the show, I was, of course, looking forward to the big numbers, such as Be Our Guest and Gaston.  But I was pleasantly surprised and thrilled to rediscover charming ditties like Something There and Human Again. 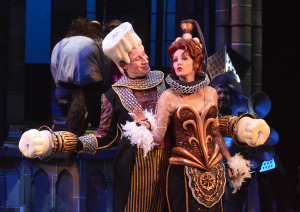 There were a couple of glitches along the way on opening night, (like when Belle exclaims that she’s never seen “so many books before,” but the panel with the books painted on them did not light up to show us the tomes!) And the very simple set of the castle leaves something to be desired. But this is a regional theatre company, after all, (no matter how big and beautiful it is,) so those are in the “unimportant” category.

I actually have only one real complaint about the entire presentation. It’s this: The orchestra conductor’s spot-lit head was so distracting! The audience is not there to see an orchestra concert; we’re there to see a suspension-of-belief cartoon tale, for goodness sake!!! We don’t need to be reminded that it’s only a stage presentation, and not something we can entirely lose ourselves in! 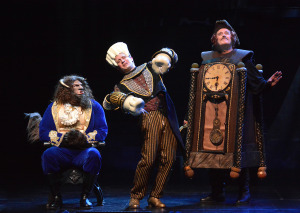 I grew up in New York in a very cultured family, so I’ve been seeing Broadway shows since I was about two! And besides that I’ve been reviewing musicals for a very long time now, my brother has been a Broadway musician ever since he graduated from college many years ago, and Mr. X starred in a major National Tour. So, trust me, I’ve been in many an orchestra pit, and still now, often lean over to see the musicians play as others exit the theatre. And I have very rarely, if ever, seen the conductor’s distracting pate (and shoulders, arms, hands, and baton) not only sticking way up there (for anything past the overture,) but being spotlighted!!! Wanting to be fair to this company, I looked behind me to see if perhaps they did not have monitors facing the stage, which the actors use to see the conductor, (as they do on Broadway,) which would mean that they need him showing, to help them with their song cues. But this theatre does have the monitors! So there is absolutely no need for the man to be seen!

But, just in case I was incorrect about any of that, (which I’m sure would have been a first,) I ran that situation by several Broadway-related pals, (musicians, producers, writers, frequent theatre-goers, etc.,) and they all confirmed what I said. So, this company really needs to re-think that practice. 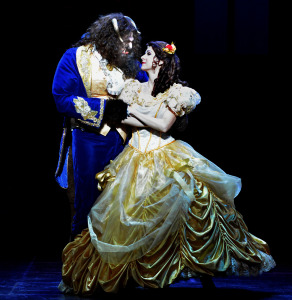 Speaking of this company, Patrick Cassidy (of the famous Jones-Cassidy acting family) is their new artistic director! I rarely say this about an older man with gray hair, (because I’m shallow,) but he’s gorgeous now! (He probably always was, but I was not very familiar with him before.) And as he addressed the crowd, I noticed that his pants bottoms were just perfect, so he’s stylish, as well. So, bravo to my fellow Capricorn, all the way around!

Getting Susan Egan to reprise her Broadway role as Belle was quite the coup for this organization, so now I look forward to seeing all the shows that 5-Star Theatricals has to offer. Two of the musicals next season are ones that I’ve never seen before, (which is a shock,) so I really can’t wait for Shrek and Matilda. (And, by the way, for my traffic-challenged Westside readers, Thousand Oaks is not really that far from us. Nina and I made it there from near UCLA in under forty minutes, and that was even on a Friday night! So take heart and go forth.) I hope to see you all there.