Trending
You are at:Home»THEATRE»THEATRE: ART
By Karen Salkin on January 31, 2012 · THEATRE

I love a show with a three-letter title! I hate typing, so the name already had me in a good mood when I arrived at the Pasadena Playhouse. (Knowing the after-party was at Bistro 45 didn’t hurt, either.) 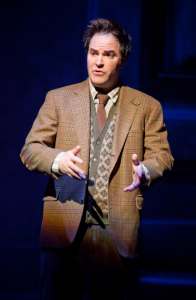 After a month filled with seeing tons of mostly-depressing films, (to vote for the SAG Awards,) it was a pleasure to see a comedy! Especially one starring Roger Bart. That man knows his craft! I had never even heard of him until I saw him in the title role in Young Frankenstein at the Pantages a year and a half ago, but when I researched him, I found-out that he’s been working in the biz for twenty-five years! Wow. And deservedly so.

The other two actors, Michael O’Keefe and Bradley Whitford, are famous-ish also; I had heard both names, but wasn’t familiar with them, although I’m sure most other audience members were. [Note: I researched them, as well. And was shocked by just how many credits they have, and I’ve never seen their work before! My bad.)

I had first seen Art thirteen years ago, almost to the day. (Thirteen years and eleven days ago, to be exact.) I enjoyed it more this time, I’m sure because of Mr. Bart. He brought such life to the role.

The short play, which won the 1998 Tony Award, is about three male friends in Paris, arguing about an expensive all-white painting that one of them bought. The location isn’t important; as a matter of fact, I’m surprised that the producers kept it as the location. I had reasoned that its French playwright, Yasmina Reza, had dictated that Paris was non-negotiable, but she also wrote God of Carnage, and that site was transferred to Brooklyn when it was produced on Broadway, so I don’t get it. The talk of “euros,” as opposed to “dollars,” was just distracting. If you don’t know the story, you can think that the location will come into play somehow, and it does not. 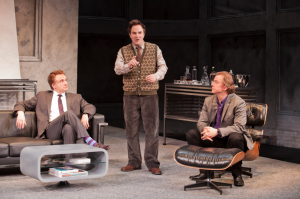 I enjoyed the show, although the long scene near the end does get a tad wordy. And I really do think it should end a few minutes earlier than it does, because the last little bit seems superfluous. But I always love a short one-acter. And, I know I’m probably alone in this opinion, but I liked the controversial painting that’s the centerpiece of the show, twhich I’m assuming is really about friendship. Ms. Reza seems to like to write about friendly conflict that in real life would not be resolved.

The best part about a short play at the Pasadena Playhouse is that there are so many cool eateries to try before or after! I was jumping out of my skin to return to Bistro 45 for the opening night party, a restaurant I had reviewed more-than-favorably many years ago. At the time of the review, they featured chocolate crème brûlée for dessert and my taste buds have never been the same. I dream of that stuff!!!

I have to laud them for the most super-generous hors d’oeuvres and buffet that I’ve ever seen at party—including mine, where I’m always proud to have way more food than necessary. But Bistro 45 surpassed even moi. (There–I threw-in un peu de Francais pour vous, parce que le play et du cette cite. Or something like that.)

The assemblage mingled on the cozy patio while imbibing several wines, which were constantly replenished by the always-on-top-of-it staff. I loved every hors d’oeuvres I tried, but especially the pork loin on crunchy toast and the chicken dumplings. OMG to those two! 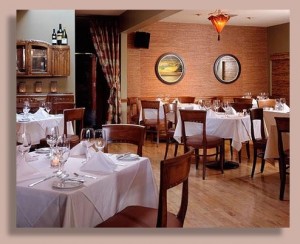 Then we moved into the dining room to dine on a sumptuous buffet of French delicacies, like lamb and seafood cassoulet. As many of you know, I don’t eat either one of those, so even though I could barely eat another bite, I was happy to see that the efficient staff still passed the appetizers for the patio gang. (Some peeps could just not tear themselves away from that lovely area.)

Just when I thought it couldn’t get any better, they came around with trays of desserts, which were all perfect and delicious, especially the chocolate-caramel squares and dark chocolate truffles. I was so busy enjoying the fare that I totally forgot to take pictures of it!!! I guess you’ll just have to go there and see the food for yourself.

As if all that wasn’t enough, at dinner I sat with Pasadena Playhouse Artistic Director Sheldon Epps, which I wasn’t afraid to do because I could honestly give him props for this production, and old acquaintance Mike Stoller, who wrote many of the iconic songs of our lives, such as Stand By Me and On Broadway, with his partner Jerry Leiber. Pretty good dinner companions.

What a completely satisfying evening! I think I need more of those this year! Please!