Trending
You are at:Home»THEATRE»THEATRE: ARCHDUKE
By Karen Salkin on May 11, 2017 · THEATRE

Having seen this revered playwright’s previous play, Bengal Tiger at the Baghdad Zoo, at the Taper several years ago, with it definitely not being my cup of tea, I was loathe to return to the scene of the crime to see his current offering, Archduke. But after recently seeing another play in town that’s also based in reality and takes place in 1915, and coming out unscathed, I decided to risk this one that’s set in 1914. 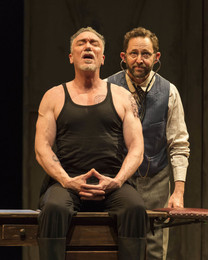 Patrick Page and Todd Weeks. Photo by Craig Schwartz, as is the big one at the top of this page.

And I’m glad I did. Archduke is a riot! I don’t even really remember Rajiv Joseph’s other play, but I know it was not at all like this one. (I just re-read that review of mine, and in an attempt to not say anything bad about the show—this was years ago—the body of my assessment of the evening was about seeing The OC’s Ben McKenzie in the lobby! My how I’ve grown. Yeah, right.)

This is a topic, (the assassination of Archduke Ferdinand,) that I was not at all familiar with. (World History class was when I took some of my best naps.) So I have to share the official description with you: “Archduke follows the unlikely path to terrorism as three strangers, already struggling to get by, receive a death sentence in the form of a tuberculosis diagnosis. But being young men with nothing to lose in Belgrade, 1914, makes them the perfect recruits for a secret organization looking to strike a blow in the name of Serbian nationalism. [The play] explores the short journey from individual hardship to public harm as personal desperation is cultivated into an act with international significance, and a few average men spark World War I.” 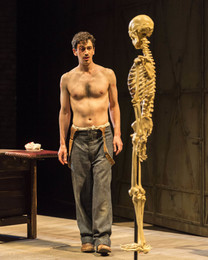 Seriously, I’m grateful that the SATs contained just English and Math, my two best subjects. My 147IQ has always seemed to go into hiding when the conversation turns to Science and Social Studies. So, while I was far from lost watching Archduke, I, perhaps shamefully, had no idea that it was based on the real assassination of Archduke Franz Ferdinand! (Had it been about the death of a beauty queen, you know I would have been all over it.)

But let me tell you, this play is very easy to follow, history knowledge or not. While it’s about at least three real people, (the Archduke, his beloved wife, and their young assassin,) the scenario leading up to that dreadful, seriously earth-shattering event is imagined by the playwright.

And it’s uber-funny, which Bengal Tiger at the Baghdad Zoo definitely is not. I had no idea that Archduke would be even the least bit amusing, let alone this hilarious! The opening night audience laughed up until the very last minute or two. (When—duh–the assassination occurred.) 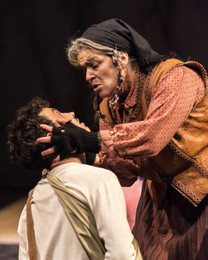 I actually almost cancelled seeing the play because, with all the depressing national news, I just did not want to see anything heavy right now. But despite the seriousness of the overall topic, the writing and execution are far from dismal. No fooling, at times I felt like I was watching the Bowery Boys! Or a trio of dueling Woody Allens. (The three young-ish guys all seemed to speak with Brooklyn accents, though I know not why. Being from there myself, that just added to the fun, though.)

Speaking of their speech, I really enjoyed the very modern dialogue. At first I was like, “What??? No one spoke with those idioms back in the day, especially in another country,” but, once I got used to it, I loved it.

The entire cast is outstanding, so I have to laud them all: Stephen Stocking, Josiah Bania, Ramiz Monsef, Todd Weeks, Joanne McGee, and especially Patrick Page and his incredible booming baritone speaking voice! I bet he could play a mean Captain Hook. I have a feeling that even the people who use hearing devices at the theatre can hear him without the assistance! (I also doubt that anyone will ever have to ask his or her seat-mate, “What did he say?,” about Patrick’s lines.) 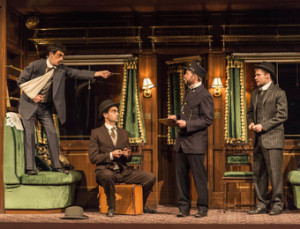 And, although the set is somewhat bare at times, it’s perfect. I loved the giant map in the first act, and I led the applause for the depiction of the train in the second, which is a beautiful bit of scenic design by Tim Mackabee.

Even though, unlike other critics who feel their readers need to be told the full story before they see a play for themselves, I like to let you have the full experience on your own, I do have to tell you about something that I really appreciated about the writing in Archduke. It opens with a young half-naked guy holding a bloody white lace handkerchief. (My first note was that I’m giving the play a good review because he has great abs! I’m telling you the truth! But that’s a bit off-topic here. A bit?!) And, although I’m not a fan of the ending, (which is real life, so what can you do?,) my breath was sort-of taken away when I realized that the scenario had come full circle—he was left standing there holding a different bloody handkerchief. And, though he seems like the same simple guy, the difference in his level of caring and human decency from beginning to end is the essence of this imagined story for me. 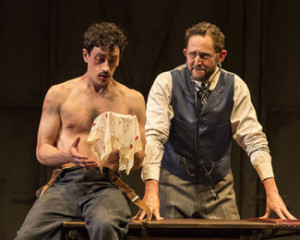 I have to tell you that I did research the entire topic for days, post-show. It’s pretty fascinating. So, if you’re a bit nescient yourself, I suggest you do so before you head out to the Taper. But it’s really no big deal if you don’t—Archduke stands on its own as a totally fun evening of theatre. (If you don’t count those last few seconds. But I say, “Oh well,” to the inevitable end.)

And on a shallow note, this must have been “TV Night” at the Taper—I spied at least four guys with current series on the tube (although I had to look up their names): Thomas Sadoski (Life In Pieces,) Peter Krause (Catch,) Harry Ford (Code Black,) and Jack Falahee (How To Get Away With Murder.) It’s always nice to see members of the show biz community supporting their own.