Trending
You are at:Home»THEATRE»THEATRE: A WORD OR TWO
By Karen Salkin on January 23, 2014 · THEATRE

A WORD OR TWO

I realized the other night that all the columns this week have pertained to talent! I love that! And what better way to continue that trend than with a review of this one-man show written, arranged, and performed by the great Christopher Plummer?!

I have so much more than a word or two to say about A Word or Two, but since Mr. Plummer made his show brief, (eighty minutes, to be exact, with no intermission,) I’ll follow suit, and simply let you know that if you’re a person of any intelligence whatsoever, (which, sadly, does not include many people I know,) please go see it. For last night’s opening, I brought perhaps my most cultured pal, an author and actress herself, and she was positively bowled-over by the performance. She said it was the “most remarkable thing” she’d ever seen, and “exquisite.” I’m leaving it at that because I wouldn’t even try to top those descriptions myself, (though, for one brief moment, I did think of using them as my own!) 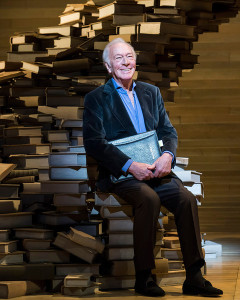 I have to confess that I didn’t know much about Christopher Plummer back in the day, (except that I had an interesting palship with his eccentric ex-wife, Tammy Grimes, when she did a play in Toronto with Mr. X; and I was also acquainted with their actress daughter Amanda, when I was just starting-out in show biz,) but when I saw Mr. Plummer do the also one-man show, Barrymore, (which, coincidentally, was at the Ahmanson, as well,) I became on instant fan. (But I’m not a fan of that long run-on sentence I just wrote!!!) That performance captivated me! It’s one I wish were on tape somewhere because I could watch it over and over. All actors should see it before they choose the profession; it will give them something to aspire to.

In A Word or Two, Christopher Plummer regales us with brief anecdotes of the earlier parts of his life, but the eighty minutes are packed with so much more than that. Each one is punctuated with limericks or bits of some famous fiction. It’s amazing how Mr. Plummer, a true actor, can slip in and out of complete characters. What a gift to have. And, at eighty-four, this Academy Award, Tony Award and Emmy Award winner has more energy than people half his age, nay, a quarter of his age!!!

I also have to give quick kudos to the crisp Robert Brill-designed set. It gives us something to look at, (because most audiences don’t want to see a blank stage,) but it doesn’t overpower or interfere with the performance at all. And the oft-changing backdrop enhances the words and mood.

I’ve never done this before, but since I feel that far too few audience members actually read the whole program, I want to share a little bit of what Mr. Plummer has written about this show. He says, “The purpose of A Word or Two is simply to celebrate language which seems to be fast vanishing from our midst.” And, “If there must be a ‘theme,’ let it be my eternal gratitude to a family who, from the moment I formed my first sentence, made me aware of the joy and magic of language which, after all, is our heritage to hold on to for dear life while we can.” Amen to that, sir!

He and I share that familial experience, so I can really relate. And you know what a stickler I am for correct language and usage. Mr. X finds it increasingly hard to watch television with me because I can’t help but correct every grammar, pronunciation, and definition mistake I hear, (sometimes under my breath, but usually out loud,) which takes up much of my viewing time! Nowadays, even supposedly intelligent people are known to say “me and my friend,” which is like nails on a chalkboard to me!

So, if you want to hear every syllable uttered correctly, and of course, entertainingly, you need to act fast because A Word or Two is in town for sixteen performances only. I wish that every school would make this show required viewing. And then I can have a modicum of hope for the next generation.