Trending
You are at:Home»THEATRE»THEATRE: 2:22 A GHOST STORY
By Karen Salkin on November 7, 2022 · THEATRE

Because “thriller” is totally my genre, I was soooo looking forward to seeing 2:22 A Ghost Story at the Ahmanson last week. And guess what? I loved every second of it!!! Yay! I’m happy to report that, for once, something lived up to my high expectations. 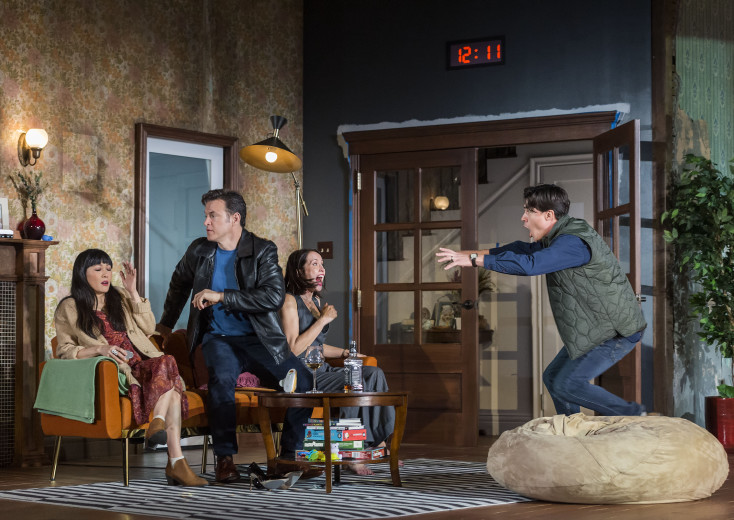 (L-R) Constance Wu, Adam Rothenberg, Anna Camp, and Finn Wittrock. Photo by Craig Schwartz, as is the one at the top of this review.

But I didn’t know exactly what to expect, actually. I went in with zero preconceived notions, so that’s what I’m affording you, too, except to laud the production. (I chuckled on opening night when the Press people handed each reviewer a note asking us not to divulge certain plot points, because, as most of you know, I never do that. I don’t feel the need to ruin anything for potential audience members just to prove that I understood what I had just witnessed!)

But let me tell you everything else about the show.

2:22 A Ghost Story is billed as a “supernatural thriller,” but it’s really more of a comedy, with a soupçon of drama in there, and a bit of terror involved at times. And it pertains to a possible ghost. Duh.

The scenario is a four-person dinner party in the new Boston home of one of the couples, where the wife thinks she’s heard a ghost in her baby’s room. That’s basically all the knowledge you need going in. And then just watch the story unfold. It’s a good one! 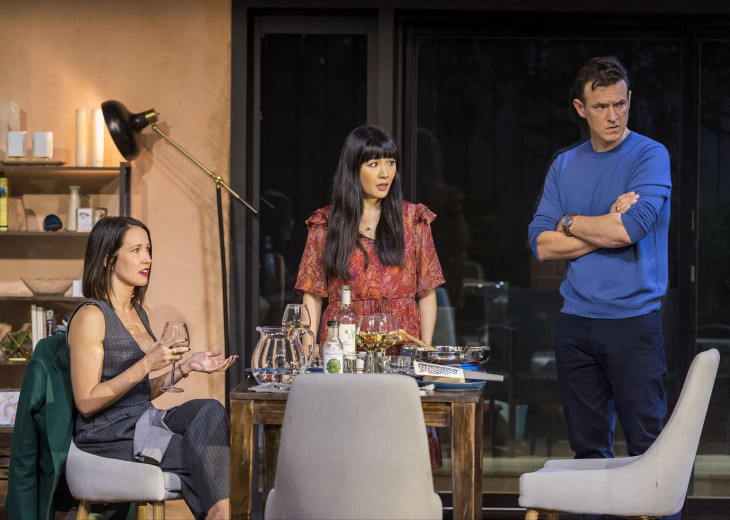 I was scared from one minute in! So I heavily suggest that you visit the restroom before you take your seat. Or better yet, wear Depends. Just in case.

About halfway through, I was worried that I’d never sleep again. But, because 2:22 A Ghost Story is such a satisfying theatrical experience, I actually fell right asleep that night, reflecting on the cleverness of it all.

Adding to the fun are the little “scene-changers”; they’re a hoot and half. They somehow made me feel a bigger part of the audience than usual because it seemed like we all had the same reaction to them.

Anna Fleischle’s gigantic set, (the space of which the production makes great use,) is perfection! But I’m a tad worried that when the actors do parts of scenes upstage, people in the back rows of the theatre won’t be able to see them well enough. (I know, I know—I’m an Empath.) The actors do keep moving, though, so hopefully, it’s not much of an issue. 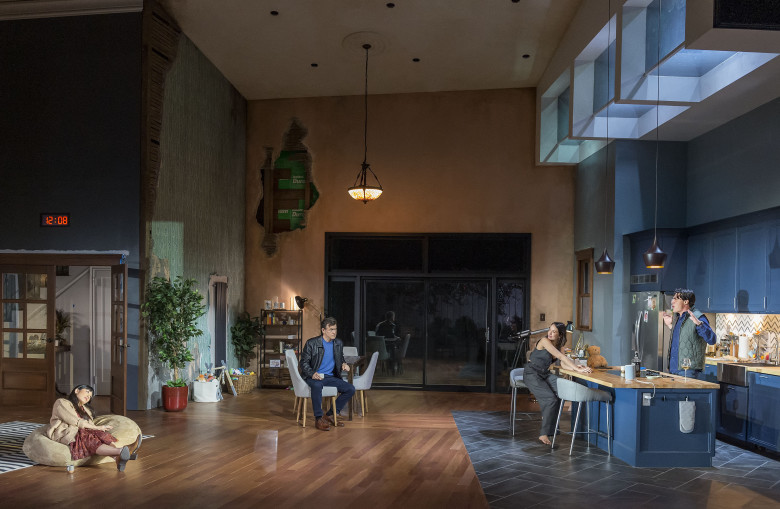 I lived in New England for a few years while attending my final college, so I can attest to that the hint of the hallway looks exactly like that area, (with the basement door and the stairway to the second floor,) in old houses in that neck of the woods. I loved that feeling coming back to me every time one of the characters went offstage that way.

In addition to that perfect set, wonderful script by Danny Robins, and excellent direction by Matthew Dunster, the cast members are all excellent. And, I’m happy to report, attractive. (Especially Zachary Mooren, an understudy I caught a gander of.) Three of the quartet of stars are somewhat famous, (Constance Wu, Finn Wittrock, and Anna Camp,) but luckily for me, I’m not familiar enough with them for that to be distracting. I got to just watch them as their characters, which I really appreciated.

My fave, though, was Adam Rothenberg as the outsider of the group, who grew-up in that area of Boston, complete with the perfect accent. He made me laugh with just about every line.

The first act flew by for me, the second act not as much. But, especially at just about two hours long, it’s all enjoyable throughout.

Little bits of 2:22 A Ghost Story elicited interesting memories for me. When the wife briefly mentions that she had called the police after first hearing a ghost, it made me hark back to a summer in Aspen when I called the fuzz because I heard a strange noise in my cabin, which turned out to be…a mouse! They thought I was nuts, especially because I was standing on a couch when they arrived. (But no worries there–it all worked out; the cute cops became my good friends, and I hung-out with them every summer after that one. When I wasn’t hanging-out with the cowboys or club guys, that is. But those are my own ghost stories.) 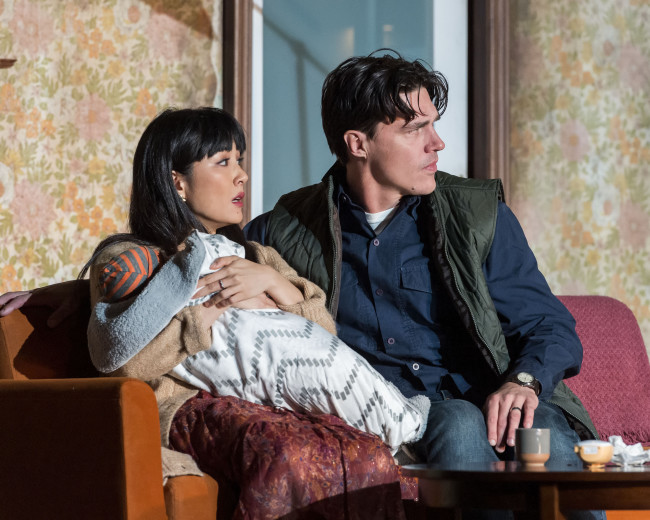 And then at one point in the narrative, the characters mention the Lindbergh baby, which, oddly, had just been discussed in another show I recently reviewed. So, when I was writing a bit of a personal story about it to include with that article, I had just researched the whole topic again, which helped me totally understand that reference in this one.

I really want to see 2:22 A Ghost Story again, now that I know what it’s about. I want to look at certain parts of it with a learned eye. But I, and you, need to hurry because, sadly, it’s here for only about four more weeks. (Hey, tickets for it would make fabulous holiday gifts!)

And, by the way, to paraphrase the Cowardly Lion, I do believe in ghosts. I do, I do. I have a feeling you will, as well, after seeing this play.