Boy, what a mess this first Major tennis tournament of the year is! And it hasn’t even begun yet!

I’ve actually been writing this article since October! But every time I think I’m ready to publish it, there’s another development in the ever-evolving situation of the creepy, selfish, unvaccinated Novak Djokovic; he’s just ruining the experience for everyone—the fans, the other players, the Aussie government, etc. So much energy is being wasted on this one entitled player; it’s ridiculous. And it’s hijacking the tournament for the nice, smart, following-the rules vaxxed participants. 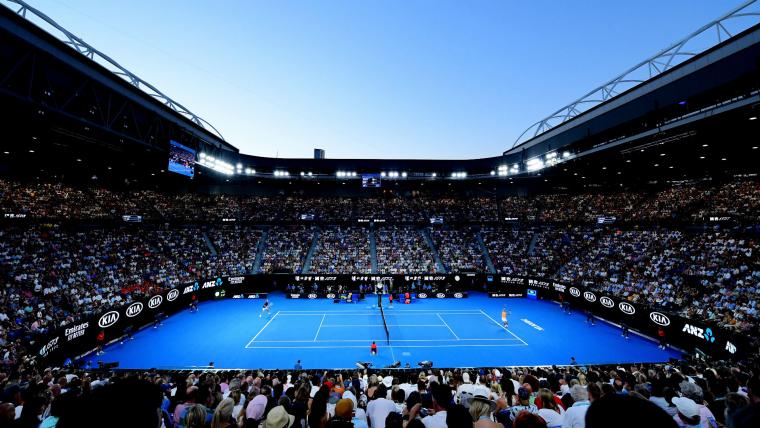 The daytime of the Australian Open.

I’ve been so upset about Djokovic’s selfishness that I began tweeting about the situation a long while ago. The tourney is due to start in less than a week from now, on January 17, but the debate about non-vaxxed players is still going on. All the way back on Halloween, when they announced that only vaccinated players would be let in, I tweeted: “Good for you, @AustralianOpen! Please do not break down and let #unvaccinated players into your 2022 #tournament. Your policy of #vaccinated people only is the right way to go, for the sake of everyone now.”

My best point about the Aussie Open-Novak Djokovic situation.

Then at the beginning of this year, as the debate about allowing in Djokovic, (who won’t reveal his vaccination status, but is an infamous, outspoken, crazy anti-vaxxer,) I became beyond hot under the collar about the possibility of the Aussie Open allowing him to play there. So I again tweeted: “I seriously hope that the #AustralianGovernment does not back down and let the selfish, entitled @DjokerNole into the country. I’ve always stuck up for him before, but to not get #vaccinated and then expect #special treatment to play in the @AusOpen is just disgusting of him.”

And then, just a little while later, this very important concept hit me, so, of course, I took to tweeting about the topic once again: “Hey, @AustralianOpen: It’s @DjokerNole’s choice to not get #vaccinated…and it’s #Australia’s choice to not let him into their #Covid-conscious country to possibly hurt others!” I even started the hashtag #keephimout. 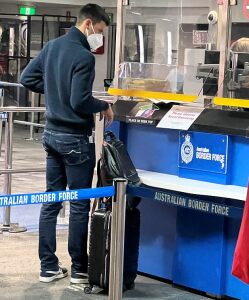 Novak Djokovic trying to enter Australia at the Melbourne airport.

All along, I kept a list of all the articles about the controversy, and was planning to re-read them all to be able to fully explain the situation to you. But it’s gotten sooooo complex that I’d need to write a Vanity Fair-length article to give you all the complicated deets.

So, the quick version of what’s been happening since Wednesday is that the unvaccinated Novak and company showed-up in Australia to play, citing his mysterious “medical exemption” against the vaccination, which he supposedly believed he had. It turns-out he assumed he had that exemption because he more-than-supposedly had Covid last month, and he claims those antibodies are as good as the jab.

But he has zero proof that he had the virus then, and he even appeared at an event with lots of kids the day after he claims to have tested positive! So he’s either selfish or a liar. Or, more likely, both! [Note: He claims that he tested positive on December 16, so if that’s true, which is a big “if,” then why was he with all those youngsters just a day later??? Also, the rule in Serbia is that if you test positive, you must quarantine for two weeks. So if he tested postivite on Dec. 16th, he should have quarantined until December 30, which he clearly did not! All this proves my point that no matter what, Novak Djokovic is either a major liar or a horrible person who doesn’t care if he gives Covid to anybody else!]

That’s Novak Djokovic in the center back, mingling with vulnerable kids the day after he says he knew he tested positive for Covid!!! How selfish can he be???

Members of the Australian Border Force tore up his visa at the airport, and tried to kick him out of the country, but he got his legal team on it, and the Aussies agreed to an emergency hearing on the whole debacle on their Monday, which was our yesterday. Mr. X and I watched the livestream of the proceedings, which ended with Djokovic being allowed to stay on a crazy technicality, which is that the original detainers at the airport gave him forty-five fewer minutes to get his people on it than one of them originally said he would have. 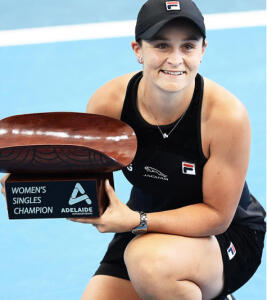 This whole thing is just insane. They would never give this extermely high level of legal assistance to anyone else!!! Not even to any Aussies themselves! Even their national heroine, World’s #1 Ash Barty, had to stay away from her own country for almost a year because of their very strict Covid protocols!!! And hey, what happened to the declaration of the Australian Prime Minister who had rightly stated of Djokovic trying to game the system, “Rules are rules”???

There is one person who can still overturn the decision, as all sane people worldwide would. So stay tuned for that.

By the way, way back in November, tournament CEO Craig Tiley said that requiring full vaccinations for absolutely everybody in attendance–players, refs, vendors, and fans alike–is the right thing to do for the community.  He stated, “It’s been made very clear, when the premier announced several weeks ago that in order to participate at the Australian Open, to come into Victoria, you’ll need to be fully vaccinated. Immediately we communicated that to the playing group. It is the one direction that you take that can ensure everyone’s safety. All the playing group understands it. Our patrons will need to be vaccinated, all the staff working the Australian Open will need to be vaccinated, when you’re in a state where there is more than ninety percent of the population fully vaccinated, it’s the right thing to do.” 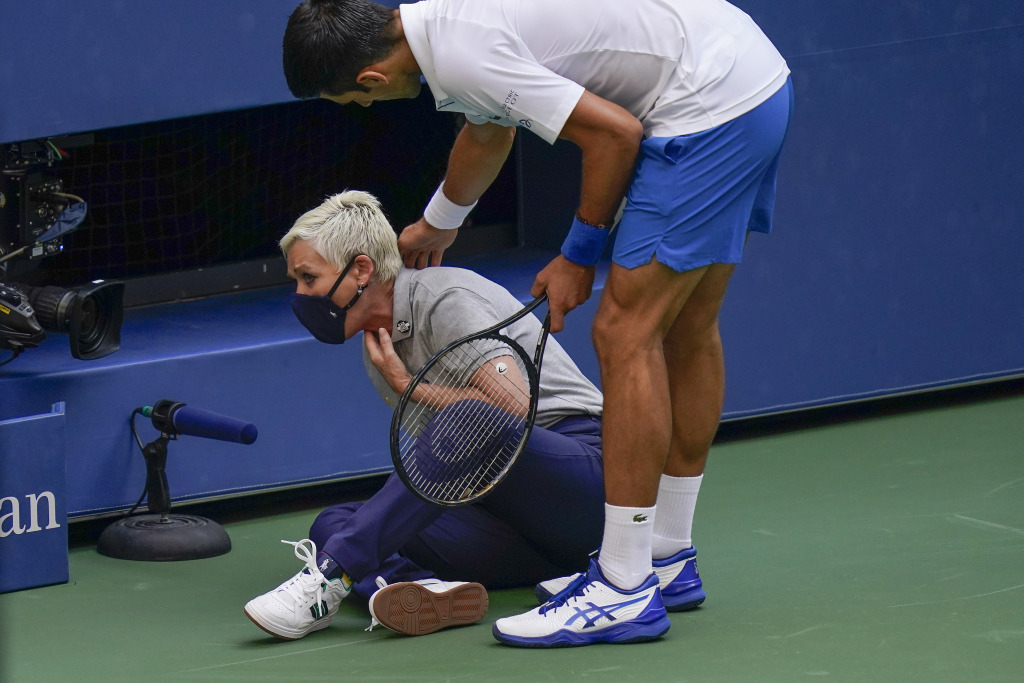 Djocovic with the lineswoman he hit in the throat, (by accident, but still…,) at the 2020 US Open.

And this is the statement the Open released near the end of 2021, as well: “Australian Open confirms players will need to be fully vaccinated in order to compete. Competition authorities confirmed on Saturday that all players would need to be vaccinated against COVID-19, and that the tournament in January would be played in front of capacity crowds. The decision casts doubt over men’s World Number One Novak Djokovic’s participation at the event, who has chosen not to reveal his vaccination status.” How much more notice does anybody need to do the right, and accepted, thing??? So it proves he is, indeed, getting special treatment.

I just checked the Aussie Open latest info before publishing this, and it was confirmed for me that several players have been denied entry into it because they, too, refuse to get the vaccine. Unvaccinated Renata Voracova, a doubles player, was also already in Australia, as Djokovic was, when border officials revoked her visa, as they did Novak’s on the same grounds. Also like him, she claims she had Covid in the past six months. But they put her on a plane back home with no hesitation. And he claims he’s not getting special treatment. Yeah, right.

Adding to all the insanity surrounding this issue is that the creepy Djokovic family compared him to Jesus!!! I’m Jewish, but even I’m offended by the blasphemy! 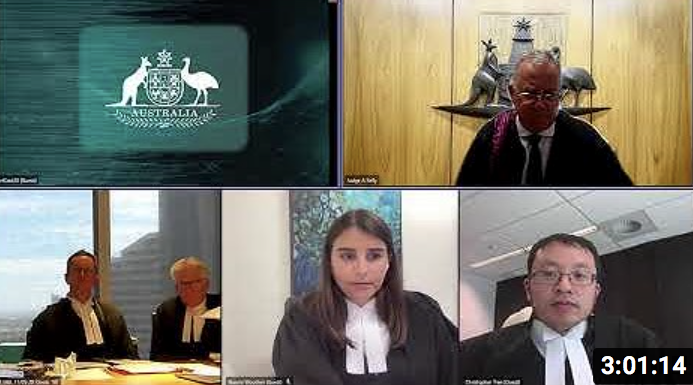 Part of the Australian government hearing on the Novak Djokovic situation. They’re so serious about safeguarding their population from Covid that it took place over Zoom! But the judge still ruled that Novak can enter the country. Insansity.

I’m not alone in all this disdain for Djokovic’s actions. (Or lack of them, actually.) One person whose tennis acumen I totally respect, sports legend Martina Navratilova, said on an interview show yesterday, “It’s unbelievable, what a saga. It could have been avoided. I just wish Novak had taken that vaccination to begin with. I admire him so much, but I can’t defend the choice to not get vaccinated. You have to take one for the team. It’s [meaning Covid] getting crazier by the minute. We’re in such close contact in the locker rooms. I couldn’t wait to get vaccinated. I admire Novak and I know what it takes to be that committed. I would be much more scared of getting sick from not being vaccinated than whatever side effects I might have from the vaccination. You really need to be more aware of everybody else.” You go, girl!

I add to compare unpopular Djokovic with the beloved Gael Monfils, who just won an Aussie warm-up tournament to the Australian Open. The crowd cheered for him like crazy. He’s had a rough few years, tennis-wise, but he got vaccinated, showed-up with no drama, entertained everyone, and gave a wonderful gratitude-filled victory speech. I sure wish he’d win the Open.

Actually, I wish that anyone but Djokovic will win it! And everything else, too. 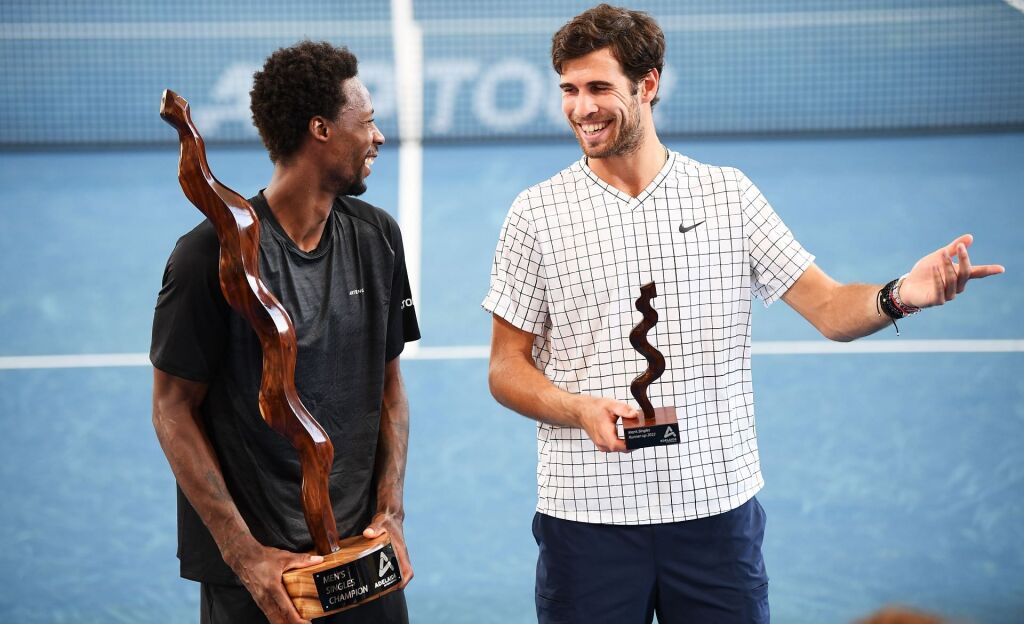 The always gracious and entertaining Gael Monfils, on the left, sharing a laugh with the man he just beat in the Adelaide Final, Karen Khachanov, (whose double Ks I’m jealous of!)

On a side note, even though the Djoker is one of the most unpopular players of all time, I have always stuck up for him previously. I still think he’s funny and intelligent, but first refusing to get vaccinated, and now putting so many people through this newest selfish odyssey of his, has made me dislike him intensely. (And let’s not forget his crazy anger-filled outbursts on the court, the most notorious of which resulted in him slamming a tennis ball into the throat of a lineswoman. It was by accident, of course, but it still shows how he feels he can do anything with no repercussions. He was shocked and petulant when he got ousted from that tourney.)

This space-taking-up controversy is overshadowing the rest of the tourney news, including that several of the top players have opted out, for various reasons. Most heartbreaking to me is Roger Federer, The Stranger I Love Most, because he’s still recovering from last year’s knee surgery. (At forty years of age, I worry that he’s going to decide it’s just not worth it anymore. God knows he doesn’t need the glory or money!) 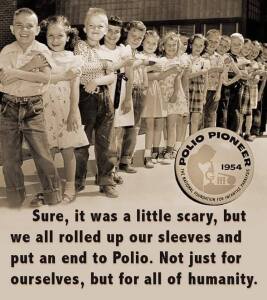 A lesson selfish anti-vaxxer Novak Djokovic has yet to learn.

Also declining to play due to injury are Swiss star Stan Wawrinka and the 2020 Aussie Open Men’s runner-up Dominic Thiem. The women’s draw will be without reigning Australian Open finalist Jennifer Brady, and other top players Karolina Pliskova and Bianca Andreescu. And Serena Williams is just not up to it right now.

And it will be without tennis-loving moi, as well. I cannot support the tournament if they allow Djokovic in.

Go, everyone else who plays!!! Especially Monfils.

[Note: As we move closer to Monday’s opening, if there are any updates to report, I’ll enter the significant ones in the Comments below. And if you know any, please share them in that same space.]