Trending
You are at:Home»TENNIS»TENNIS: WIMBLEDON 2021 BEGINS ON MONDAY! (AND SOME OTHER USEFUL SPORTS INFO)
By Karen Salkin on June 25, 2021 · TENNIS

WIMBLEDON 2021 BEGINS ON MONDAY! (AND SOME OTHER USEFUL SPORTS INFO)

After this venerable tennis tournament had to be cancelled in 2020, for the first time during peacetime, due to the pandemic, it will be a welcome sight for all of us Wimbledon fans. (The only other times it had been cancelled was the years of the two World Wars. That was, of course, the only choice they had because it would have been way too dangerous for everyone concerned.) 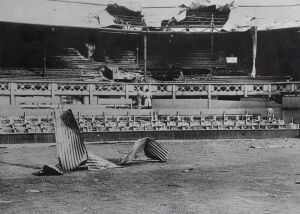 Sadly, this is what the Wimbledon courts looked like during the second World War.

But even you non-tennis fans might be interested in the plethora of drama that’s already surrounding this year’s edition of the famous British tennis tourney.

Here are just some of the latest pre-tournament developments:

~ This one is breaking news: Defending Champion Simona Halep just dropped-out of the competition this morning, just as they were starting the draw!!! (She’s defending champ because she won it in 2019, and there was no tournament last year.) She injured her calf in May, and was hoping it would be okay enough for Wimbledon, which is why she waited until the very last second to call it. She would have been seeded second, behind the lovely Aussie Ash Barty, so this is really devastating for Simona. (And for her fans, such as myself.) I just hope she heals in time for this summer’s Olympics. 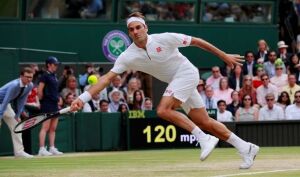 ~ With England still dealing with the pandemic, all the players will have to abide by strict “bubble” rules. That means no more delightful private houses being rented by the top players, which is usually the case. All participants will have the same accommodations, whether they’re ranked #1 or #100. They’ll all be staying in an official tournament hotel in central London, and can be only there or at the All England Club where the tournament takes place. Period. Dot, dash, end of story. There will be no outings with their fams this go-round, nor even dining at their favorite eateries! Shame. (I know that some, like my beloved Roger Federer, adore that cultural aspect of his traveling-centric profession! And sharing it with his big family is the icing on the cake. Now he can’t even bring them into the country!)

~ The World #2 female, Naomi Osaka, dropped out to “work on her mental health.” That should give many other women some hope for their own chances to come away with a Wimbledon victory. (But her fans needn’t worry—she said that she plans to play in the Olympics because it’s in her native Japan, and she doesn’t want to miss that opportunity.)

~ The same as above with the World #3 male, Rafa Nadal, except for the mental part. He said he has to listen to his body, which is telling him to slow down for a bit. He’s not even competing in the Olympics a few weeks after Wimbledon! 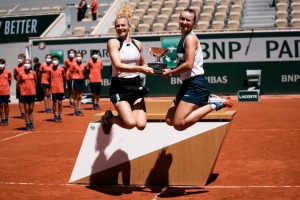 ~ The ladies’ side has been pretty unpredictable of late, but the recent French Open was just insane! It was contested by two first-time finalists, and won by Czech Barbora Krejcikova, who was not even seeded. And her opponent in the Final was Russian Anastasia Pavlyuchenkova, who was seeded #31. Crazy!!! (Even I, the most avid tennis-watcher you will ever know, didn’t know anything about those two!) On top of that, Barbora then went on to also win the doubles title, with her fellow Czech, Katerina Siniakova, making Barbora the first woman to win singles and doubles at the same French Open in twenty-one years! So does any of that bode well for any of this trio at Wimbledon? I can’t wait to find-out. 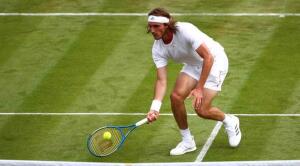 ~ Stefanos Tsitsipas, one of the young guns whom all of us have waiting for to take over from the Big Three males, just almost beat #1 Novak Djokovic in the French Open Final. He was up two sets to none (out of five sets, for you nescients,) so that made me extra-sick that he lost. Not to make excuses, but just five minutes before he went out on the court, he found-out that his grandmother had died. And, at just twenty-two, that’s quite the emotional blow. But if Roger Federer isn’t in the Wimbledon Final, (God forbid, bite my tongue, poo-poo-poo,) you can bet that I’ll be rooting for Stefanos to finally break through.

~ Dominic Thiem, who was due to be the #4 seed, had to just drop-out due to a wrist injury he suffered a couple of weeks ago at the French Open. That throws a bit of a monkey-wrench into the proceedings because he’s the only one of the supposed “next generation” to break through and win a Major tournament, last September’s US Open. Shame. He also has to pass on the upcoming Olympics, in hopes that he’ll be all healed in time to defend his US Open Championship beginning in late August. 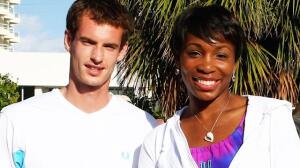 Andy Murray and Venus Williams waaay back in the day!

~ As if the pandemic hasn’t made me finally feel sort-of old, the news that former Champions, Andy Murray and Venus Williams, needed Wild Cards to get into the tournament definitely did!!! If those two are now so “senior,” what’s to become of the rest of us???

~ The tournament organizers have said that they’re allowing almost their normal number of spectators into the stands. (It will be fifty percent capacity for most of the time, and then full capacity on Centre Court for all the Finals.) That’s a controversial decision, especially because England still has a Covid situation going on. Far from everybody is happy with that plan.

~ This isn’t a development, but I just wanted to add that, as always, I’ll be rooting for The Stranger I Love Most, Roger Federer! I can’t believe he’s still in there competing at almost forty-years-old! (His birthday is August 8th.) You go, Boy! I mean, Man! 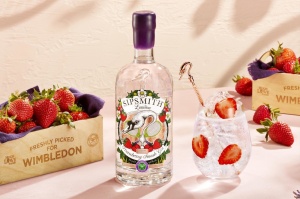 I’ll definitely be feasting on strawberries and cream during Wimbledon, but if things don’t go my way, I may have to actually start drinking, as well!

That’s all the up-to-date Wimbledon news. But to remind you all of just how sports-obsessed I am, it will not be just tennis that will keep me glued to the TV over the next two weeks. Because the NBA season began late due to Covid, the basketball play-offs are still going on.*  Big-time. During the Wimby fortnight, both Conference Finals will end, and then the final Finals begin!  Since I’ve already watched every single second of the entire play-offs for over a month now, you can bet that I refuse to miss any of these most dramatic stages of the season. (If I don’t pass-out during it all, both from exhaustion and stress! All these competitions are fraught with major tension! I literally barely breathed during the last few minutes of the Bucks’ win over the Nets in Game 7 of the Conference Semi-Finals!) *[Note: The entire NBA season is always over by the middle of June, which means it doesn’t interfere with the end-of-June-starting Wimbledon.  But because the 2020 NBA season got postponed to such a late date because of the coronavirus, this season had to be moved down a month. So the schedule has been it was basically akin to dominoes falling.]

On top of all that, we’re thick into a very fascinating baseball season, and the Olympic trials are still going on. And the entire world of sports will be celebrated on the ESPYs, which occurs on the night before the Wimbledon Men’s Final!

I think I’ll hibernate through this upcoming week-end to rest up for the two weeks ahead. If there was a Championship for Sports-Watching, I believe that I would be the one raising the trophy!

[Note: I usually tweet many of my thoughts as the tournament goes on, @MajorCelebrity. I’ll try to do so again this year, but please forgive me if I don’t—there’s a lot going on here, so I’ll probably be behind in my sports-watching. But if anything really significant happens, you know that I’ll be getting the word out to my peeps.]