Trending
You are at:Home»TENNIS»TENNIS: WIMBLEDON 2019 BEGINS TODAY
By Karen Salkin on July 1, 2019 · TENNIS

For only the second year, this classiest tennis tournament is beginning in July! It usually kicks-off in June, and often early enough that it ends around July 4, not the late middle of the month, as it will this year. So I’m already starting off a bit confused.

The official name of the Wimbledon venue.

I really don’t have much to say about the current Wimbledon going in. After my crushing defeats in the Men’s Semi-Final and Final at the recent French Open, (which I don’t have the head to even write about now,) I can’t believe I’m even putting myself through this stress again.  I keep telling Mr. X that I have to be cut-off from watching sports.  But I can’t help myself—I love this genre so much!  That so many people can perform these feats of athletic prowess is just fascinating to me! (And the Toronto Raptors defeating the very unpopular Golden State Warriors to win the NBA championship a few weeks ago lifted my soul back up a lot.) 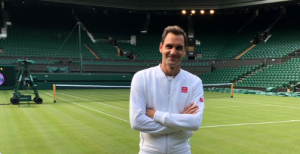 Of course, I’m always rooting for The Stranger I Love Most, Roger Federer, who recently won his hundred-and-second ATP singles title! What an amazing achievement! On top of that, he’s the classiest person in sports ever! My dream is to see him play in person one day. (Hopefully one day soon—he’ll turn thirty-eight in just over a month!) 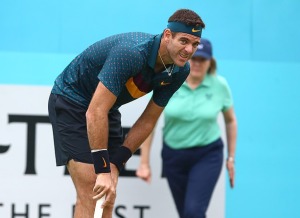 And I’m sparing several thoughts for the Gentle Giant, Juan Martin Del Potro, who fractured his right kneecap for the second time in eight months during a recent match. Everyone loves that guy, who has won one Grand Slam in his career, (which is a feat in itself in this era of Federer, Nadal, and Djokovic,) so this is very depressing and distressing for all his fans and fellow players, as well as for Juan and his family. He’s thirty-years-old, and his big body has been plagued by many injuries and surgeries, so this is possibly the end of his career. It would be so sad if he has to retire, with so much talent still waiting to be tapped. 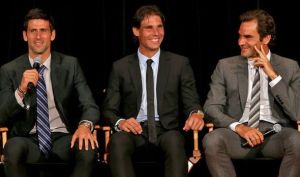 I don’t have a female tennis player about whom I particularly care this time around.  That might be because between both college and pro basketball, and watching the success of the Yankees despite their plethora of injuries this season, with some ice skating and football mixed in, I haven’t paid much attention to tennis this year.

So my obsessive tennis-watching, which I seem to have abandoned since last September, resumes today.  (If you’ve been reading INAM for years now, you know that I watch every single second of the fortnight of Wimbledon!  Hence, my assessment that I’m obsessed.) 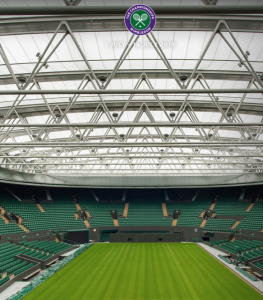 Centre Court, with the roof closed.

The worst part of the entire two weeks for me is being subjected to creepy ESPN anchor Chris McKendry mispronouncing words that end in “w.” She always adds an “l” to them for some inexplicable reason. For example, she says “sawL” for “saw” and “drawL” for “draw”!!! What is wrong with that woman?! I’m sure I can’t be the only one who has tweeted at her, (multiple times, to boot,) to please stop that ignorance! At least, don’t foist it on us, the viewing public.

Speaking of tweeting, I will, of course, be tweeting my daily thoughts on all the proceedings, as usual, along with perhaps a photo or two. So if you don’t already follow me on Twitter, @MajorCelebrity, this would be a good time to do so.

So, until that first update, my only thought right now is: Go, Roger!!!